Several Texas school districts are requiring students to use clear backpacks in the wake of last month’s deadly shooting at an elementary school in Uvalde.

Ingleside Independent School District, near Corpus Christi, became one of the latest to announce the new policy this week, after its board of trustees unanimously approved updating the district’s dress code policy to require clear backpacks starting in the 2022-2023 school year. 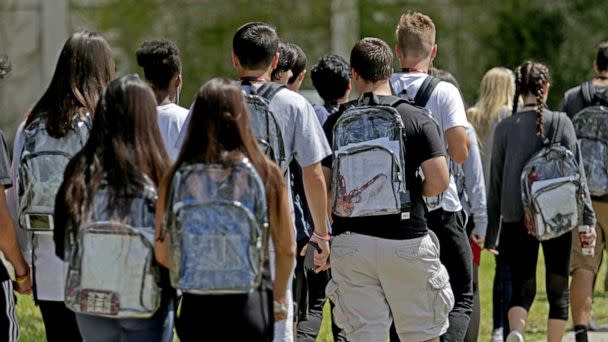 “Safety is a top priority for Ingleside ISD and is on the forefront of concern for school districts across Texas and our nation,” the district said in a statement Tuesday.

The policy is also expected to aid in processing students through metal detector lines at its secondary campuses, the district said.

Several other school districts have also implemented clear backpack policies in the wake of the May 24 shooting, in which 19 students and two teachers at Robb Elementary School were killed.

Harper ISD, about 90 miles northwest of San Antonio, announced earlier this month that it will implement a clear backpack policy for students starting in the fall “in light of the recent school shooting, and in an effort to do everything we can to increase safety for our students and staff.”

Two local businesses donated a backpack for every student in the district.

Greenville ISD, located about 45 miles northeast of the Dallas-Fort Worth metropolitan area, also said it will require clear backpacks starting in the fall, among other safety measures. The policy is a “common-sense measure is becoming more common at both school and public events,” the district said.

Additional security measures announced this month include having one front access point for entry and requiring that all classroom doors remain locked at all times, the district said.

The new measures also came a month after a fake pipe bomb was found at the district’s high school. The school was evacuated and a juvenile was taken into custody over the incident, school officials said.

Clear backpacks have become common in the wake of school shootings. Several other Texas school districts already require them among their security measures.

Marjory Stoneman Douglas High School in Parkland, Florida, temporarily required its students to use clear backpacks after a deadly 2018 shooting on campus. Some students questioned the policy’s effectiveness and raised privacy concerns at the time.

Following the massacre at Uvalde, in which the shooter entered the school through an unlocked door, Texas Gov. Greg Abbott suggested that schools conduct weekly door checks, among other security measures. He also requested that state lawmakers convene special legislative committees to make recommendations on school safety, among other areas.