Police forcefully dispersed tens of thousands of people who took part in three protests across Russia that spanned January and early February, when Navalny returned to the country from Germany and was later jailed for two-and-a-half years.

Since then, riot police have advertised hundreds of times for jobs on recruitment websites such as HH.ru, run by Headhunter Group, Avito and Superjob.ru. A Reuters review of data provided by some of the recruitment firms suggests the ad blitz went well beyond any similar drive in recent years. 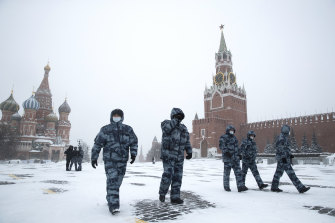 OMON units of the Russian National Guard, who work at protests across Russia, posted for jobs on Headhunter 1,607 times from January 24 to February 24. That compared to just 151 job ads in the same period last year.

In the same month, Moscow’s main riot police unit, the Second Special Regiment, also posted for jobs 608 times on Headhunter, versus 11 during the period last year.

“No experience is required,” read a job description for police snipers for the Second Special Regiment on Headhunter’s page, promising candidates a monthly wage up to 70,000 roubles ($1,224).

The ad was first posted on the Headhunter website on February 21 and republished 100 times within four days, Headhunter’s press service told Reuters.

The Russian Ministry of Internal Affairs did not reply to a request for comment. The Russian National Guard press service said publication of job ads was “business as usual”, and they did not analyse whether the number of ads was surging or not.

On Avito, the number of riot police jobs posted between January 26 and February 25 was 3.7 times higher than the same period last year and the number of responses was up 5.1 times, according to data the company shared with Reuters.

Two OMON officers reached by phone said the recruitment drive was not linked to protests but reflected a need to replace people leaving the service for new opportunities. Eight officers from the Second Special regiment confirmed the campaign was larger than normal.

“We have a big recruitment drive,” one told Reuters.

Another officer said the intensified hiring followed a decision taken about two years ago to expand staff.