This is the shocking moment a car was sent rolling down a road and spinning on to its roof after a hit and run crash.

Video shows the black Nissan Juke careering down East Marsh street, Grimsby after it was hit by what is believed to be a blue Ford Focus whose driver failed to stop at a junction.

The driver of the Juke was treated for injuries by the East Midlands Ambulance Service after crawling out of the overturned vehicle – and the other motorist involved left the scene following the collision just before 7pm on Monday.

The Nissan Juke had been travelling down Wellington Street when the other vehicle collided with it after failing to stop at a junction.

Police are appealing for information about the crash after the other driver involved drove away from the scene following the incident.

Humberside Fire and Rescue were called to the scene to assist with clearing the collision, using a fire engine to pull the car back upright. 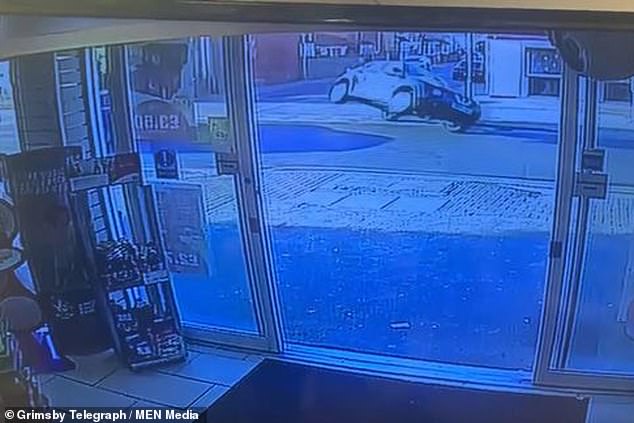 A section of Wellington Street was closed by Humberside Police between the junctions with Weelsby Street and Rutland Street and a large crowd of youths gathered to watch as emergency services carried out their work.

‘One of the cars did not stop at the scene and we ask the driver of this car, or anyone with information about the collision, to call our non-emergency number 101 quoting log 545 of 13/05/19.’