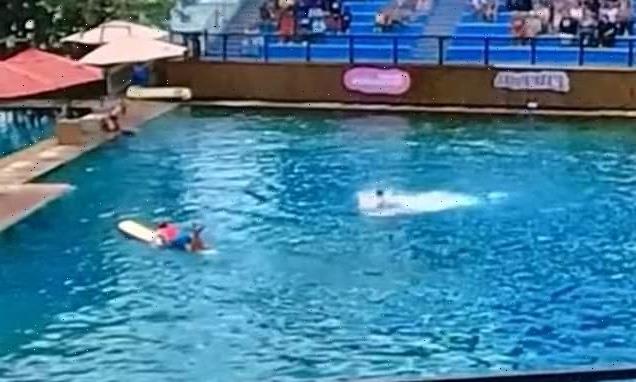 A spectator captured the moment a dolphin at the Miami Seaquarium went rogue, diverting from its choreography to attack its trainer on Saturday and horrifying the audience.

Sundance, a 23-year-old dolphin who has lived at the Seaquarium his entire life, turned violent in front of young children and families during the Flipper show.

In footage posted to TikTok by photographer Shannon Carpenter, the dolphin can be seen lunging at a trainer swimming in the water. Two other performers, one on a surfboard, race out of the pool as the animal lunges two more times, pushing the woman back as she tries to swim to the pool’s edge.

The audience can be heard breathing a sigh of relief as the trainer pulls herself from the water, doubling over her knees and visibly shaken. Another trainer can be seen kneeling down next to her.

‘You could tell she was in some type of pain,’ Carpenter told WPLG Local 10. ‘The kids were cheering and thinking this was neat. You could tell the adults knew something was wrong.’

The trainer was picked up by an ambulance and brought to an area hospital after the attack, the outlet reported. 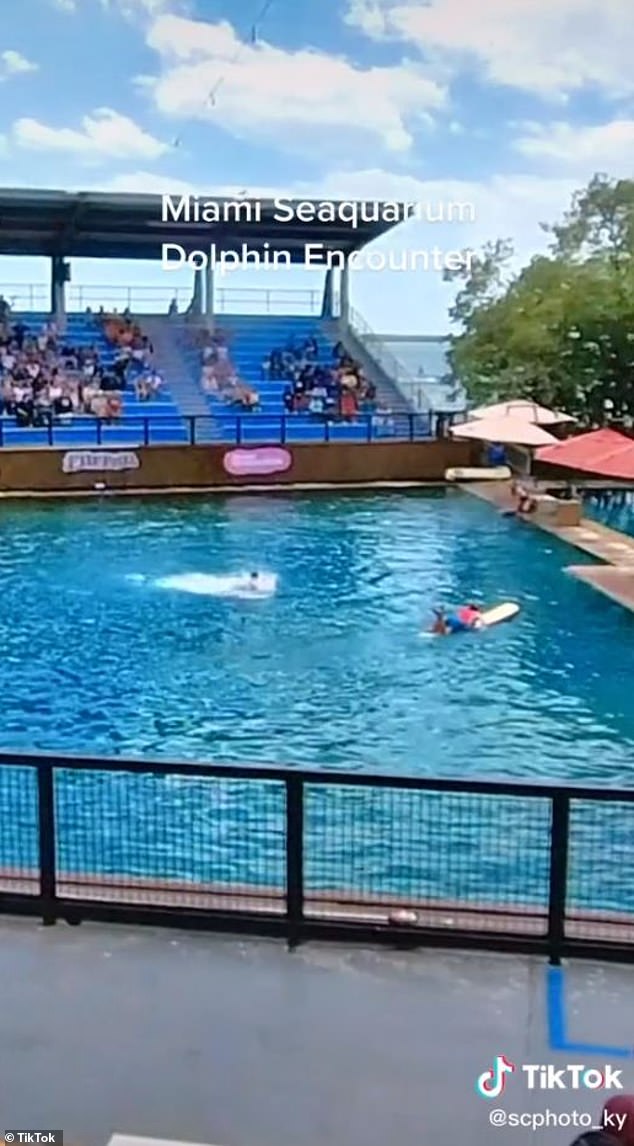 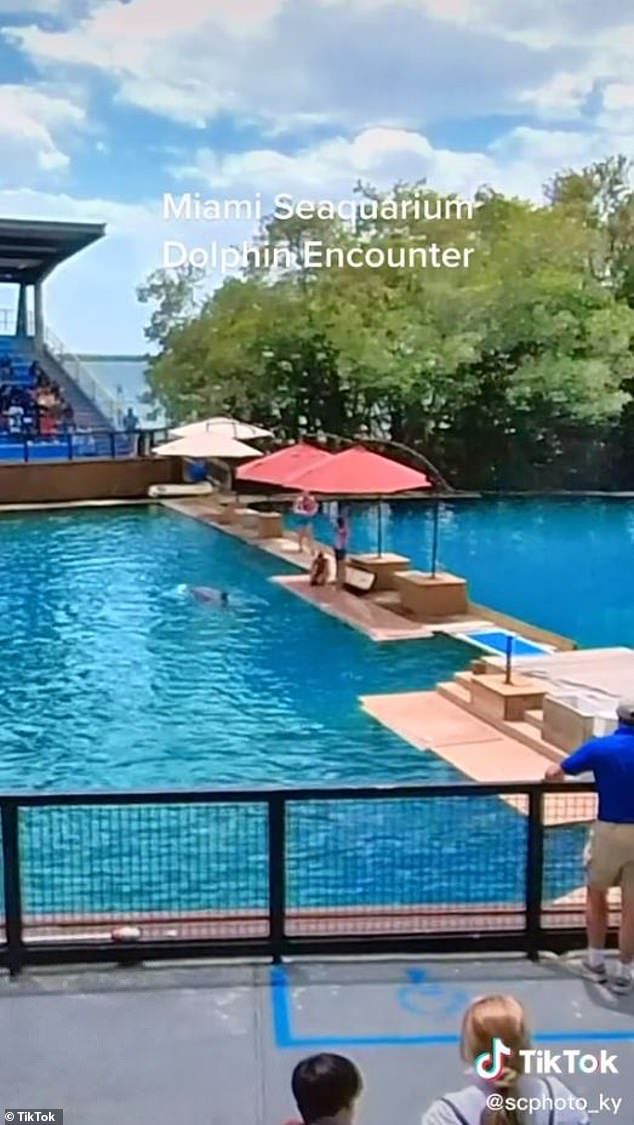 The audience can be heard breathing a sigh of relief as the trainer pulls herself from the water, doubling over her knees and visibly-shaken. Another trainer can be seen kneeling next to her

In the wild, dolphins will often ram attacking sharks with their strong snouts, targeting their underbellies and gills, according to the Whales and Dolphins Coalition. The animals can reach swim speeds of up to 18 mph.

Mexican-based Seaquarium issued a statement addressing the incident on Monday night, writing that the dolphin and trainer ‘accidentally collided in the water on Saturday while performing a routine behavior as part of the Flipper show.’

‘This was an uncomfortable interaction for both of them and the dolphin reacted by breaking away from the routine and striking the trainer.’ 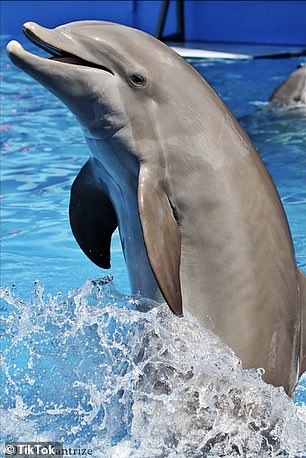 Sundance, pictured, 23, is a male dolphin who was born at Miami Seaquarium. The establishment could not be reached by DailyMail.com to determine the animal’s fate after the attack

‘As a precaution, Miami-Dade County safety authorities were contacted.’

‘Our family extends to include the animals in our care, our team members and our guests. While there is no apparent serious injury, a careful watch and follow-up evaluations will ensure the best care for all.’

DailyMail.com could not reach the dolphin company for comment on the trainer’s well-being or whether Sundance the dolphin was still performing after the attack.

This is the latest in a string of incidents at the Seaquarium, which was cited for numerous animal welfare violations – including feeding rotten fish to animals and keeping an orca named Lolita in a crumbling tank for 25 years – by the USDA in a 17-page report last June.

‘Time is up at Miami Seaquarium, where long-suffering dolphins desperately need protecting and workers are at risk,’ the group wrote.

‘PETA urges this abusement [sic] park to end its exploitation of dolphins by getting them into sanctuaries as quickly as possible, where they’d never be used in tawdry shows again and no-one else will get hurt.’ 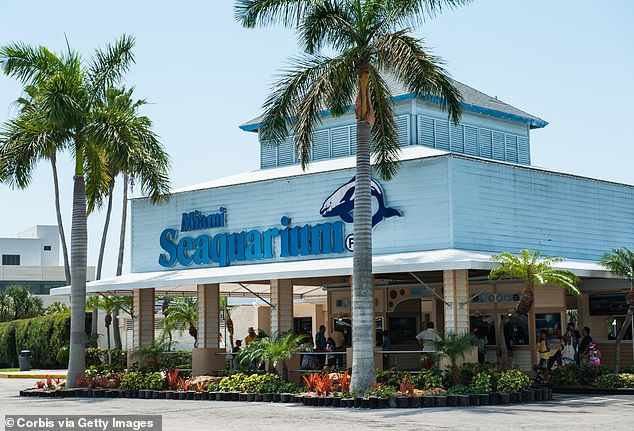 This is the latest in a string of incidents at the Seaquarium, which was cited for numerous animal welfare violations by the USDA in a 17-page report last June 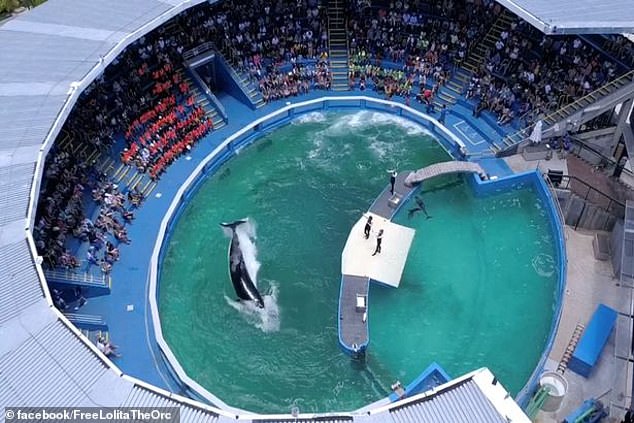 The park was cited by the USDA for feeding animals rotten fish and keeping Lolita the Orca, pictured, in a crumbling, too-small tank