Can a $49 billion budget whose main thrusts are $9.2 billion for infrastructure, $5 billion on hospital and school upgrades and another $5.3 billion for a public housing building bonanza be considered "sexist"? 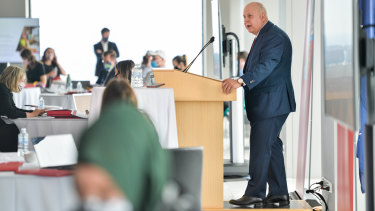 Victorian Treasurer Tim Pallas speaking to a budget that includes measures targeted to help women back to work.Credit:JOE ARMAO

On Wednesday, as advocates noted contrasts between the "shovel-ready jobs" and high-end tax cuts in an October federal budget accused of "overlooking the hard-hit in favour of the hard hat" and Tim Pallas' efforts to help the state's 109,000 now-jobless women back to work, combat record family violence, fund tutors for disadvantaged kids and boost women's start-ups, Mitchell was not celebrating.

"[There's] $150 million for job subsidies specifically to get 6000 women back into the workforce, $50 million of it for women over 45, money for free kindergarten, before and after-school care," he told his listeners.

"There's a women-in-construction strategy, $5 million to get more women there, $5 million for women in TAFE training programs, a women-in-transport strategy … $6.5 million to find and train women as surveyors; it almost looks sexist," he said.

The first budget in which the disproportionate toll on Victorian women of the pandemic was named and directly addressed was "the ladies' day budget … the Oaks Day budget", he quipped. Mitchell welcomed his guest, seasoned campaigner Tanja Kovac, with the opening gambit: "It's sexist by definition, isn't it?"

I think it's sexist to roll out the same kind of stimulus package that does not address the particular harm this recession has caused women.

Kovac, chief of staff to the late minister for women, Fiona Richardson, and now the chief executive of Gender Equity Victoria, was nonplussed. "Is it sexist to want to have a 35 per cent lift in gross domestic product to the state? That's what gender equity delivers you," she shot back.

"That's from the International Monetary Fund; it's what they're telling governments all around the world that they need to do: if they close the gender gap, they're going to get a 35 per cent lift in gross domestic product." That wasn't sexist, Mitchell agreed, in what became a friendly interview.

For Kovac as well as community and corporate women’s advocates, academics and economists who have argued for gendered programs such as those included in this budget – steps to help relieve the extra burden of care, job creation in female-heavy industries and upskilling for women to enter new ones and subsidies to keep older women employed – this budget is "a start".

On Kovac's maths, over four years the total expenditure on gender equality measures is "still less than 1 per cent". Still, it is better than things looked just months back when, as the state's woes multiplied, advocacy groups got the message that women's economic insecurity was nowhere near top of mind for Treasury.

She believes the "wave of rage" unleashed over the lack of a significant boost for childcare funding and investment in the care sector generally in federal Treasurer Josh Frydenberg's second budget, and the dismissal of criticism for this, helped to focus Victorian minds on action.

According to ABS figures, in the six months to September more than 6 per cent of Victorian women lost their jobs, while just under 4 per cent of men became unemployed; men lost 70,000 jobs, about 39,000 fewer than their female counterparts.

While celebrating gender-specific solutions, experts including University of South Australia Emeritus Professor Rhonda Sharp, author of the framework for Australia's first gender-responsive budget strategy in the 1980s and a former UN adviser, and Dr Leonora Risse, a labour economics and gender equality specialist at RMIT University, say gains will only be meaningful if a "gender lens" stays.

"Statistics are pretty clear that women are hardest hit in terms of job losses in Victoria. There is no doubting the evidence. We know what industries are the highest employers of women and what industries were most affected by the lockdown," Risse says.

"We also know from time-use studies that women take on more of the caring responsibilities on average, so if you're concerned about how you restore the economy and make sure [you support] workers whose jobs aren't there any more, and their capacity to join the workforce has been suppressed, to design policies that accommodate those people requires a gender lens."

Even if you focus solely on the worst-hit industries, "you would be thinking about female workers in the interests of the economy", Risse says. "It's an extremely logical investment … to allow the economy to operate more efficiently and more productively."

Sharp describes this budget as "a green shoot for women, not the full flower. It needs to be institutionalised", if for no other reason than "women's labour force participation in the post-war era has been the biggest single cause of economic growth".

Women's workplace participation will be "the long tail concern of this recession", says Grattan Institute chief executive (and national president of the Economic Society of Australia) Danielle Wood. "We've seen so many women leave the workforce, and I think there is a real risk some of those women won't come back or won't come back soon," she says.

Free kinder and some before- and after-care in 2021 would help some women back, but "we still need the Commonwealth government to act [on childcare support] if we're going to make serious inroads." It was "almost pointed" that the state chose to act on wage subsidies for older women and some childcare relief, areas of federal responsibility that the October budget was attacked for overlooking.

"[Victoria's] feels like it was a budget for the times, for this recession, and that addresses the areas of most acute need," Wood says. "It's interesting that when you have a budget that tries to address some of the underlying issues, the big issues that have faced women [during the pandemic], that that's called sexist.

"I think it's sexist to roll out the same kind of stimulus package [as for previous recessions] that does not address the particular harm this recession has caused women."

There are "still plenty of hard hats going on in this budget, and rightly so", she says.

"We know the housing construction sector will take a big hit, so it's absolutely right for the government to invest in social housing. The Property Council called it a hard-hat and high-vis budget – there is plenty in there for that sector."

Economist Angela Jackson, of Equity Economics, says gender-responsive budgeting, a feature of Australian federal budgets installed by prime minister Bob Hawke but abolished during Tony Abbott's term, has become "the norm" internationally for its proven economic impact and is supported by the IMF, the OECD and the World Bank.

The lens applied to last week's budget has been "strong and is to be welcomed but now needs to be embedded into the process". Policies such as skills education and tutoring support are particularly useful.

"One of the things that is really strong in the literature is if you've got a poorly developing four-year-old, your chance of participating in the workforce is greatly reduced," Jackson says. "We know female participation in the workforce is heavily impacted by the development of kids. If they're not doing well, they will tend to cut back their hours or drop out altogether."

She urges the federal government to offer similar policies: "Women have an important role to play in the family, yes, but also in the economy.

"They are a really good source of potential economic growth. But they need to be supported in that. The thing to remember is if men and women aren't doing well, none of us are doing well. We're part of a community, and women have been badly affected by this virus and the economic fallout," Jackson says.

On some issues, for example reducing male suicide and educational attainment, a gender lens that focuses on male workers may be required. "But if we don't support women in the recovery, everyone will suffer. This is about addressing the problem as it stands," she says.

"If a woman gets back into work, other jobs are created around her: male or female jobs. It isn't sexist to understand and to address that."