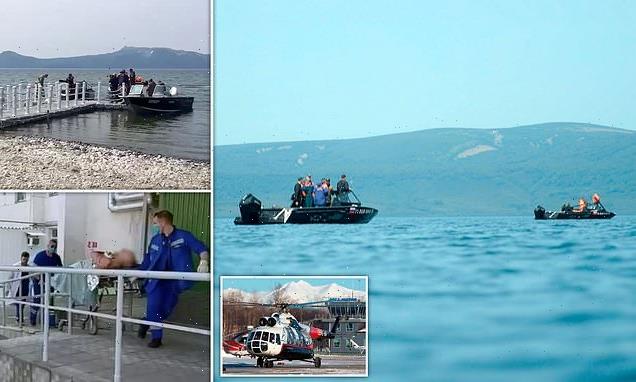 Seven ‘VIP tourists’ are feared dead and at least eight people swam for their lives after their helicopter plunged into a near-freezing volcanic cater lake in Russia’s Far East.

Rescue workers are searching for survivors in Kurile Lake on the Kamchatka Peninsula after the Russian Mi-8 helicopter crashed in dense fog on Thursday.

The survivors of the crash were plunged 30ft (9 metres) below the water’s surface when they escaped from the sinking helicopter and swam in to the surface in 42.8 degrees Fahrenheit (6 degrees Celsius) waters, they told rescuers.

After the helicopter crashed nose down into the lake, which is in the Kronotsky nature reserve, they swam out of the rear cargo hatches which had opened on impact.

Wildlife rangers in the Kronotsky nature reserve, famed for its spectacular volcano-and-geyser scenery and wild brown bears, described arriving at the site in two speedboats minutes of the crash to find the eight survivors in the lake’s waters. 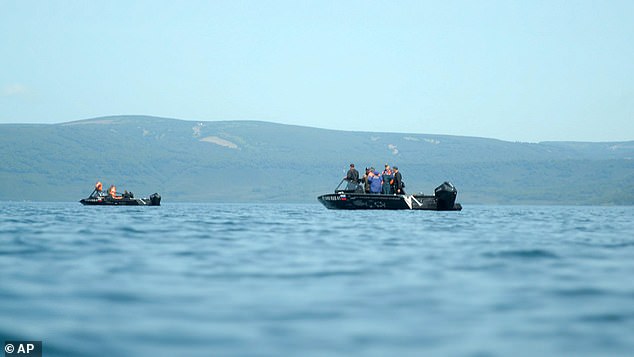 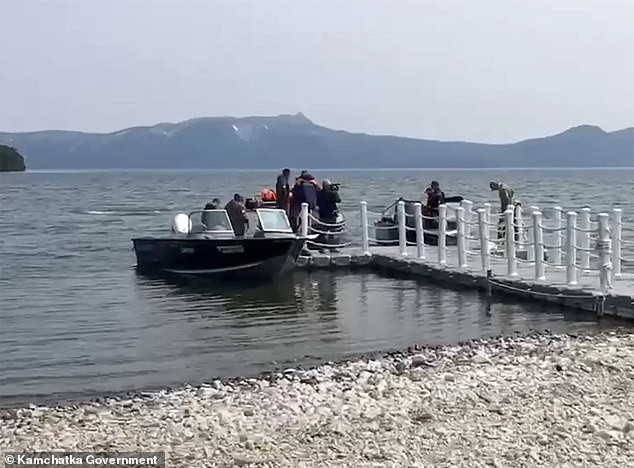 Wildlife rangers in the Kronotsky nature reserve, famed for its spectacular volcano-and-geyser scenery and wild brown bears, described arriving at the site in two speedboats minutes of the crash to find the eight survivors in the lake’s waters 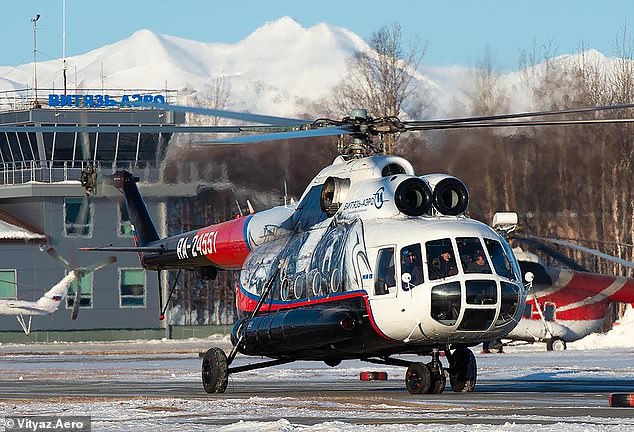 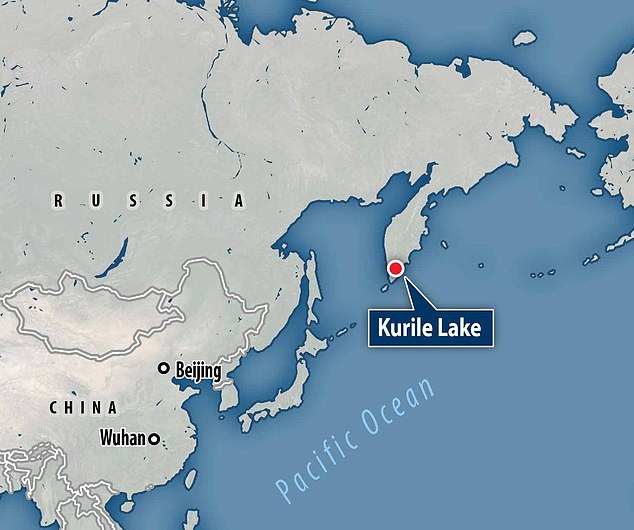 They said two of the survivors were badly hurt and that the temperature of the water was no more than 5-6 degrees Celsius (41-43 Fahrenheit) and that they would not have survived long.

Russia’s Emergencies Ministry said 13 tourists and three crew members were aboard the helicopter and eight people survived, according to the state RIA Novosti news agency. Two of the survivors were badly injured and have been taken to the intensive care unit at a local hospital, the Interfax news agency reported.

Russian news reports did not list the nationalities of the tourists aboard the helicopter, but said that most of them were from Moscow and St. Petersburg.

Engine failure and pilot error were seen as the main versions of the Mi-8 tragedy, a source in the emergency services told TASS.

‘Both engine failure and piloting error are considered among the main versions of a hard landing,’ the source said. 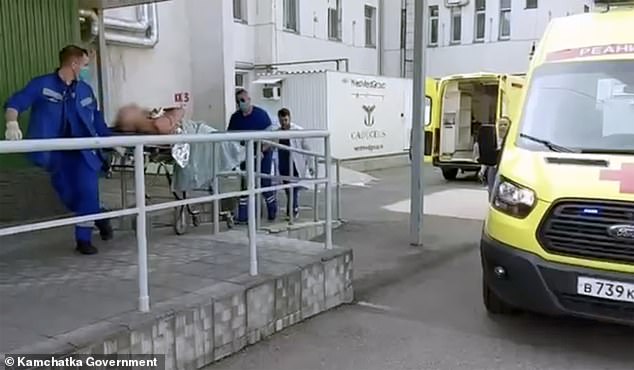 Two of the survivors were badly injured and have been taken to the intensive care unit at a local hospital, the Interfax news agency reported

Among those initially reported missing in Kurile Lake was main pilot Nikolay Sorokin, while at least two crew members survived, according to reports. Sorokin was described as highly experienced, a former military officer.

A child was also among those unaccounted for, said officials.

Later reports citing the regional health ministry said that nine had survived, six men and two women, but there remained discrepancies in the number of survivors.

‘Nine people have been found, they are all alive,’ a source told Interfax.

Two of the rescued were in ‘grave’ conditions after being plucked from the chilly 6C water.

A video showed the wounded being rushed inside a hospital, while another showed attempts to search the scene on the fog-bound lake.

The Mi-8 with a total of 16 on board crashed as it attempted to land in thick fog, said reports. 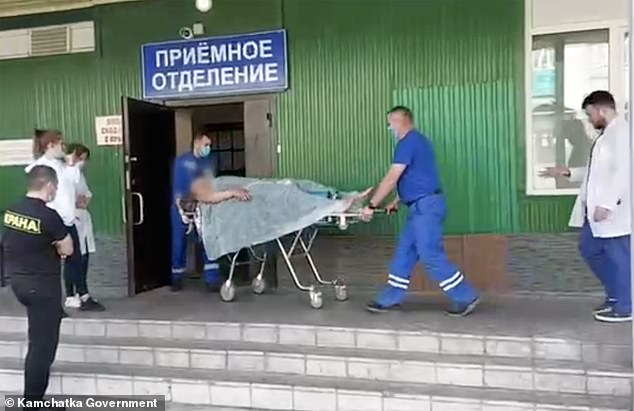 A video showed the wounded being rushed inside a hospital, while another showed attempts to search the scene on the fog-bound lake 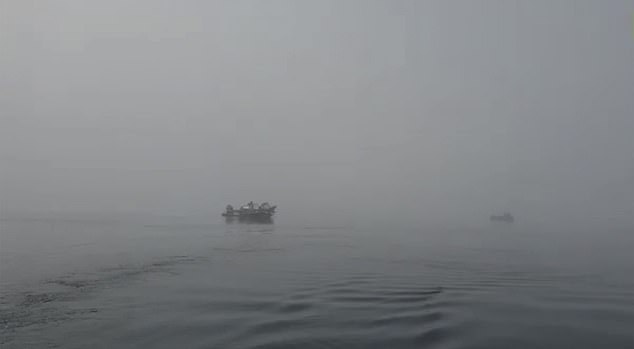 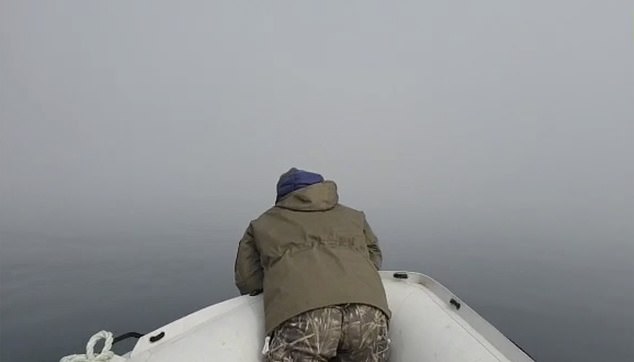 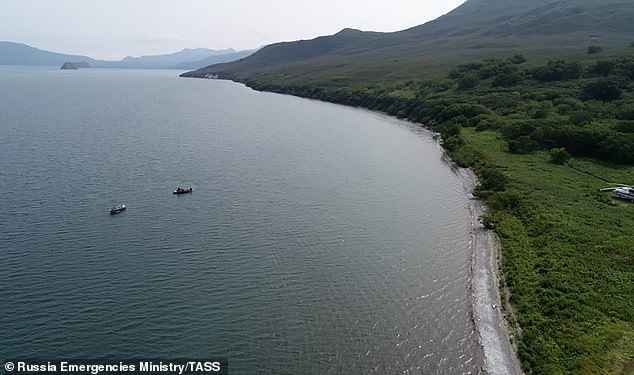 Yevgeny Denges, the district state inspector of the Kronotsky nature reserve, said: ‘We heard the noise of the helicopter, but did not see it.

‘Judging by the sound, it flew over the lake and began to turn towards our base.

‘Then there was a loud bang – the helicopter hit the water. We immediately launched two boats and in three or four minutes reached the crash site, which we identified by waves in the water.

‘There were eight people on the surface of the water, who were immediately lifted aboard and taken to the cordon.

‘Two were seriously injured. We began to provide first aid to the victims, to warm them up.

‘We moved the boat around the lake several times in search of other people, but found no-one.’

Visibility was less than 100 metres when the helicopter crashed at 9.25am local time today, he said.

Many tourists visit the lake to watch up to 1,000 bears gathering to fish its teeming water. The trip was for wealthy tourists on a ‘VIP trip’, it was reported. 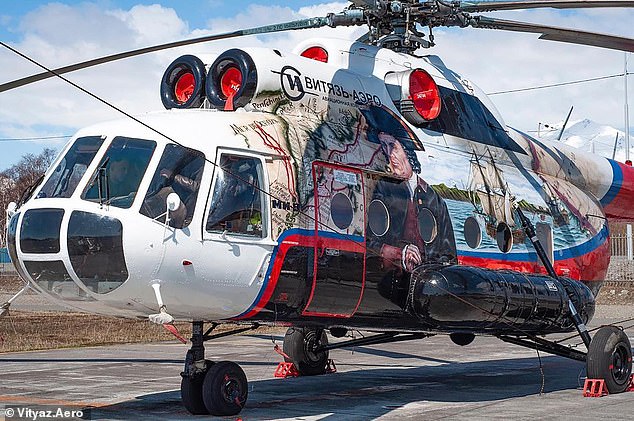 Reports said that no bodies had been located yet in the waters, and rescuers sought help from the Russian navy with deep diving equipment.

One survivor was Nikolay Korzhenevsky, ex-TV presenter at Rossiya 24 channel, now a respected specialist in stock trading in Russia, who teaches at Moscow’s Higher School of Economics and is a Fellow of the Oxford Foundation.

The Vityaz-Aero helicopter was carrying the tourists to Khodutka, a volcano near the city of Petropavlovsk-Kamchatsky.

Dramatic accounts have since emerged from some of the miracle survivors of the crash.

Georgy Kopvantsev, 48, from St Petersburg, indicated the pilot did not realise he was over water when he attempted to land the helicopter. 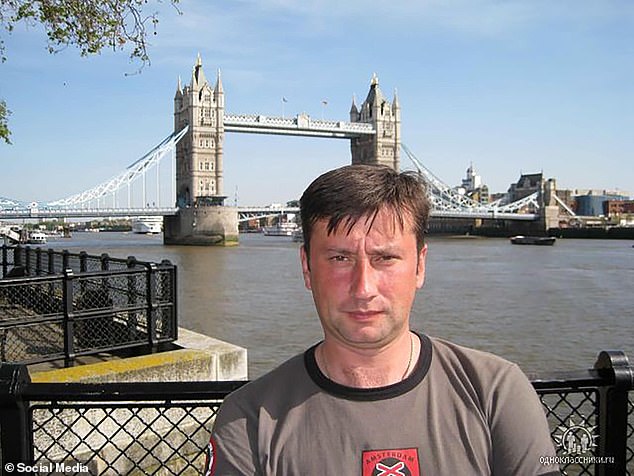 Georgy Kopvantsev, 48, from St Petersburg, indicated the pilot did not realise he was over water when he attempted to land the helicopter

‘We began to descend to land through a cloud of fog,’ he said. The fog was like milk, rather dense. It was a smooth descent at normal engine speed. But it ended with a hit on the water.

‘Then there was a roll to the nose and the helicopter was immediately flooded. I saw a slit in the rear hatch. It probably opened after we struck the water. It was as wide as a palm.

‘I put in my hand and it opened because of the water. And all of us in the rear of the helicopter managed to swim out. I was swimming up for 30 or 40 seconds, making a lot of strokes. We were rather deep already.’

He added: ‘Getting the hatch open took a long time, and the helicopter was sinking rather fast.’

Viktor Strelkin, also from St Petersburg, said he was asleep on the helicopter when water hit him in the face.

‘I realised that something happened when water hit me in the face. It is hard to talk about it,’ he said.

Stelkin added: A boy was sitting next to me, my friend’s son, but because I was sleepy… if only I was not sleepy, I would have managed to at least remove his seatbelt.’  The boy is missing, presumed dead.

‘I unfastened myself and I was instantly lifted up, there was an air bubble on the top, I managed to breathe in, and it all got filled with water.’ 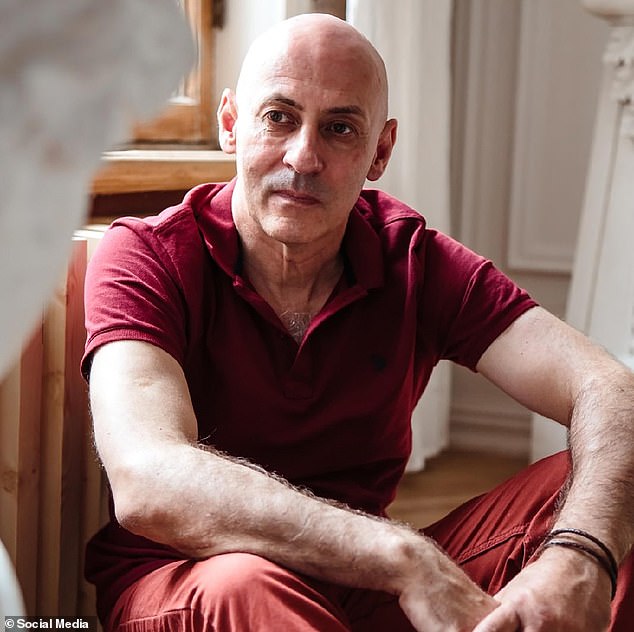 Viktor Strelkin, also from St Petersburg, said he was asleep on the helicopter when water hit him in the face

Stelkin dived down and came up in the cockpit where there was another air pocket. The windscreen was broken and he swam through it, and swam up.

He said: ‘I did two strokes and started lifting. It was about 8-9 metres deep. I am into free diving, this is why I can estimate the depth. It allowed me to keep calm.

‘It wasn’t over on the surface because the water was bitterly cold, visibility was about 20 metres, very low fog, and people were screaming for help. My sneakers were pulling me to the bottom.

‘It was very hard to take them off. I tried to find something floating because it was clear that much longer and we would all freeze.’

But rescuers arrived on boats soon afterwards, he said. ‘I was pulled out of the water first. ‘Then Anastasia, the guide, and second pilot and mechanic.

‘The mechanic had serious injuries, his foot and arm were broken.’

The survivors were given tea and hot water bottles, and wrapped in blankets, as rescuers searched in vain for more survivors.

‘Thank God, they reacted so fast,’ he said.

‘I was told that the guys were simply standing on the shore and listening to the sound of the helicopter. Then the sound disappeared.’

Tourist Elena Antipina was also among those rescued from the lake crash site.

At least five survivors were flown to hospital in regional capital Petropavlovsk-Kamchatsky.

The helicopter, manufactured during the Soviet era 37 years ago, was operated by Vityaz-Aero, a local private carrier. Its director said it had recently undergone maintenance and was in good shape.

The Mi-8 is a two-engine helicopter designed in the 1960s. It has been used widely in Russia, ex-Soviet countries and many other nations.

The area where the crash occurred can only be reached by helicopters, and fog complicated rescue efforts, the RIA Novosti reported. A total of 15 rescuers, including six divers, were involved in the rescue operation, according to Interfax.

Kamchatka, the pristine peninsula which is home to numerous volcanoes is known for its rugged beauty and rich wildlife. The Kronotsky reserve, which has Russia’s only geyser basin, is a major tourist attraction on Kamchatka and helicopters regularly carry tourists there.

Quickly changing weather often makes flights risky. Last month, an An-26 passenger plane crashed on Kamchatka while approaching an airport in bad weather, killing all 28 people on board. 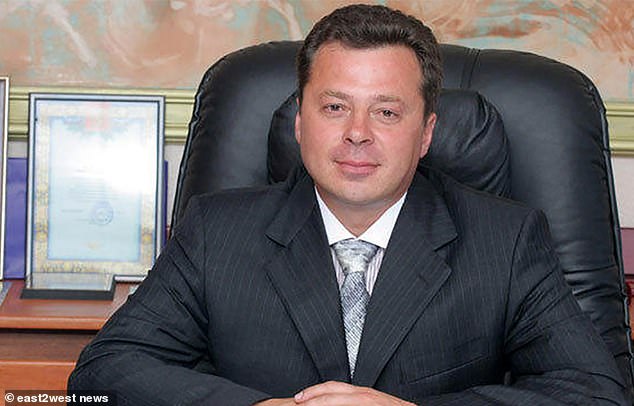 Russian news reports said Vityaz-Aero is half-owned by Igor Redkin, 55, a millionaire businessman who is a member of the Kamchatka regional legislature

Russian news reports said Vityaz-Aero is half-owned by Igor Redkin, 55, a millionaire businessman who is a member of the Kamchatka regional legislature.

Redkin was placed under house arrest earlier this week after he shot and killed a man who was rummaging in a garbage bin. Redkin said the shooting was accidental after he mistook the victim for a bear.

There are an estimated 20,000 bears on Kamchatka, and they occasionally roam into settlements looking for food.

Redkin has resigned his membership pending the investigation while saying the shooting of local resident Andrey Tolstopyatov, 30, was accidental.

He added: ‘I am ready to face the punishment, which will be determined by the court.’