The U.S. Coast Guard is searching for over a dozen migrants after their vessel sank off the coast of Florida as Hurricane Ian was moving through the region, authorities said.

Four Cuban migrants had swam to shore after their vessel sank “due to inclement weather,” Slosar said.

#[email protected] crews rescued 3 people in the water about 2 miles south of Boca Chica. They were brought to the local hospital for symptoms of exhaustion and dehydration. Air crews are still searching. #SAR#DontTakeToTheSea

The U.S. Coast Guard began a search and rescue mission for an additional 23 people, Slosar said.

Crews have so far rescued three people in the water about 2 miles south of Boca Chica, the U.S. Coast Guard Southeast said.

“They were brought to the local hospital for symptoms of exhaustion and dehydration. Air crews are still searching,” the Coast Guard said in an update on Twitter.

The rescue efforts are underway amid dangerous weather conditions from Hurricane Ian. The storm made landfall on Florida’s west coast Wednesday afternoon as a major Category 4 hurricane, bringing with it powerful winds and life-threatening storm surge. 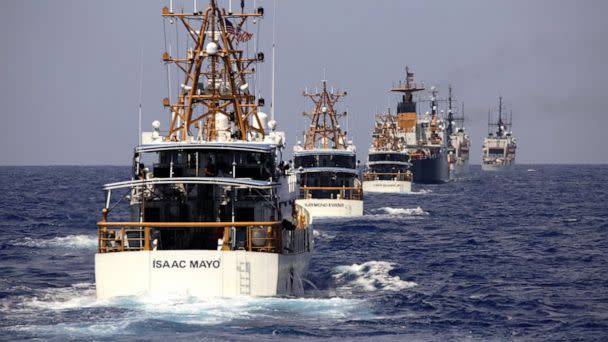 The hurricane’s landfall was at about 3:05 p.m. ET near Cayo Costa, an island off the coast of Fort Myers.

The entire Florida Peninsula is under either a hurricane or tropical storm warning due to Hurricane Ian.

The storm is forecast to bring the threat of heavy rains and catastrophic storm surge as it moves through Florida.

The rescue mission comes a day after seven migrants from Cuba were taken into custody after making landfall at Pompano Beach, north of Fort Lauderdale, according to Slosar.

“Do not risk your life by attempting this journey at sea,” he said on Twitter. “Storm surge along with King tide can create treacherous sea conditions even after a storm passes.”