London: Fears that the new Boris Johnson government could lose the Union by winning Brexit have been heightened by a new poll that puts Scottish independence ahead for the first time in two years.

The survey by pollster Lord Ashcroft found 47 per cent of Scots agreed there should be another independence referendum within two years – as First Minister Nicola Sturgeon has demanded – with 45 per cent disagreeing. 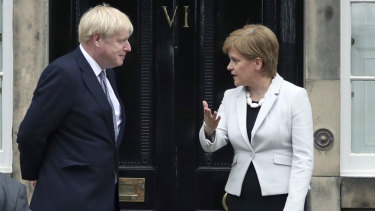 It is the first lead for independence in a published poll since a survey by a different pollster, Ipsos MORI, in March 2017, and the biggest lead since a brief burst of polls in June 2016, just after the Brexit referendum in which Scotland voted a majority against Brexit.

In September 2014 Scotland voted by 55 per cent to 45 per cent to stay in the UK, after the highest turnout of any election or referendum in British history.

Sturgeon told The Scotsman the new poll was “phenomenal”.

“More and more people think it’s time that Scotland took our own decisions and shaped our own future,” she said.

Johnson visited Edinburgh last week in one of his first acts as prime minister – but he was booed on arrival by boisterous nationalists outside Sturgeon’s official residence, Bute House, and reportedly left by the back door.

He also won a tepid welcome from Scottish Conservative leader Ruth Davidson, who criticised Johnson’s Brexit strategy saying “I don’t remember anybody saying we should crash out of the EU with no arrangements in place to help maintain the vital trade that flows uninterrupted between Britain and the EU”.

On Sunday he announce a big cash boost for NHS hospitals in England and Scotland, to go towards new equipment and upgrades – though health think tank the Nuffield Trust said the promised £1.8 billion was barely a third of the amount needed to clear the existing backlog of necessary repairs and replacements in the health system.

During the 2016 Brexit campaign Johnson promised a vote to leave would mean extra hundreds of millions of pounds available for the NHS every week.

The cash splash has added to speculation Johnson is setting up for an early general election, though Conservative Party chairman James Cleverly said on Sunday the government would not “initiate” an election – it would only happen if Labour staged and won a no-confidence vote in parliament.

A by-election loss to the Liberal Democrats last week has left the minority government with a working parliamentary majority of just one, and Labour leader Jeremy Corbyn has hinted at calling a confidence vote in the coming months before the Halloween Brexit deadline.