Local lockdowns are to be enforced in parts of Wales and Scotland from tomorrow after the areas saw large spikes in coronavirus cases.

Renfrewshire and East Dunbartonshire in the west of Scotland will see new restrictions imposed from midnight tonight, with a similar clampdown for Caerphilly county in south Wales coming into force from 6pm tomorrow.

First Minister Nicola Sturgeon warned that Scotland must ‘step up’ its efforts to stop the spread of coronavirus or she may have to ‘put the brakes’ on the return to greater normality.

The 180,000 people who live in the Renfrewshire council area and the 110,000 in East Dunbartonshire have been told they should not enter other people’s homes following a surge in the number of coronavirus cases. 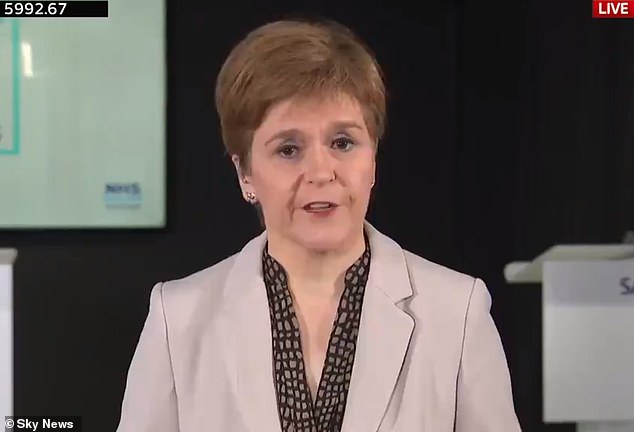 The 1.1million residents of the area have also been told not to visit homes in other parts of the country, while only ‘essential’ indoor visits to hospitals and care homes will be allowed.

Further plans to relax restrictions on live sport and reopening entertainment venues have also been thrown into doubt due to the resurgence of the virus.

Mrs Sturgeon said: ‘Over recent weeks, we have seen a continued increase in new Covid-19 cases in the Greater Glasgow and Clyde health board area. 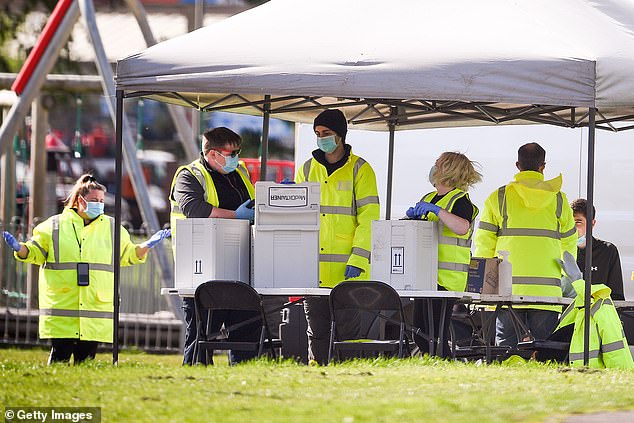 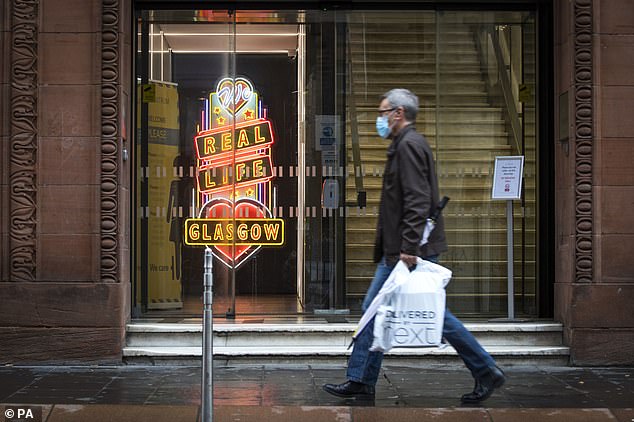 The 180,000 people who live in the Renfrewshire council area and the 110,000 in East Dunbartonshire have been told they should not enter other people’s homes following a surge in the number of coronavirus cases

‘It is necessary to help us limit the spread of Covid-19. Acting now gives us the time and the space to protect people and get more control over the virus.’

Latest daily figures yesterday showed a further 146 people had tested positive for coronavirus – a day after cases soared by the highest number in nearly four months.

No new coronavirus deaths have been reported in Scotland in the last 24 hours but 146 new cases have been recorded.

A total of 2,496 patients have now died in Scotland after testing positive for coronavirus.

Speaking during the Scottish Government’s daily coronavirus briefing, the First Minister said 21,543 people have tested positive for the virus in Scotland. 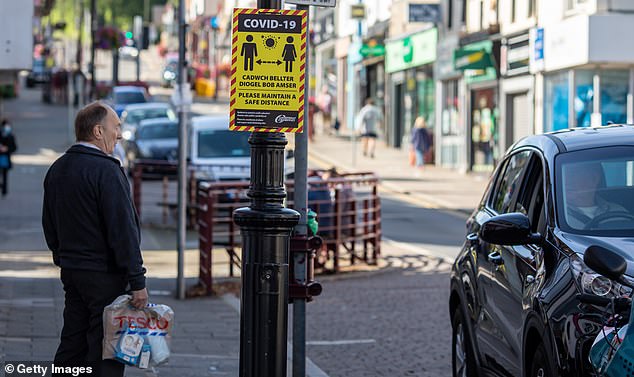 People living in the county borough of Caerphilly will not be allowed to enter or leave the area without a reasonable excuse when the restrictions come into force from 6pm on Tuesday, the Welsh Government said 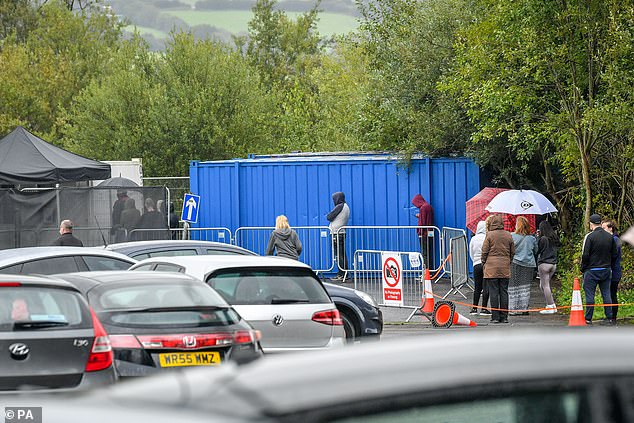 There have been 133 new Covid-19 cases in Caerphilly county borough over the past seven days, equivalent to a rate of 55.4 cases per 100,000 population

Of the new cases, 78 are in Greater Glasgow and Clyde, 19 in Lanarkshire and 13 in Lothian.

Scotland’s latest review of lockdown restrictions is due to take place on Thursday but Ms Sturgeon said ‘it may be that we have to put the brakes on some further changes’.

Oxford University’s coronavirus vaccine will most likely be rolled out in the ‘first few months’ of next year, according to the Health Secretary Matt Hancock.

The jab was expected at the end of 2020 but its creators have tempered expectations and pushed it back to next year.

Mr Hancock said today he still had some optimism the most vulnerable people will get their hands on the vaccine in the coming months in a ‘best-case scenario’.

But he admitted the more likely outcome would be a 2021 roll out of the jab, known as AZD1222, which was created by Oxford and owned by UK drug giant AstraZeneca.

The Health Secretary revealed manufacturing was already underway in the UK for 30million doses, enough to vaccinate half the population.

He said that having them on standby meant they could be dished out to those most in need as soon as the vaccine is given the green light by regulators.

‘The best-case scenario is that happens this year. I think more likely is the early part of next year – in the first few months of next year is the most likely.

‘But we’ve also bought vaccine ahead of it getting approved from a whole different series of international vaccines as well.’

It has not yet been proven that Oxford’s vaccine works but early trials have heralded promising results, with tests showing the vaccine is safe to use in humans and appears to provoke an immune response. But data that proves it protects people is not expected until later this year.

More than 50,000 people worldwide are taking part in ‘phase 3’ studies to see whether the Oxford jab can actually prevent people getting infected with Covid-19.

In these tests the vaccine is being given to tens of thousands of people in real-world environments to see if it stops them from catching Covid-19 in the community.

Scientists behind the jab had to move their studies abroad over the summer – to South Africa, Brazil and the US – where Covid-19 is still rife, to speed up the trials.

There are not enough people catching the virus in the UK anymore to be able to reliably test whether the jab is working.

‘We must take this trend seriously and if we want to avoid having to close parts of our economy down again, and I think we all want to avoid that, we must step up our other ways of keeping Covid under control,’ she said.

‘This really is a key moment, and I want therefore to be pretty frank with you in my assessment today.’

People living in the county borough of Caerphilly will not be allowed to enter or leave the area without a reasonable excuse when the restrictions come into force from 6pm on Tuesday, the Welsh Government said.

Everyone aged over 11 will be required to wear face coverings in shops – marking the first time this will be mandatory in Wales.

As in Scotland, Meetings with other people indoors and extended households will not be allowed, and overnight stays also banned.

There have been 133 new Covid-19 cases in Caerphilly county borough over the past seven days, equivalent to a rate of 55.4 cases per 100,000 population.

This is the highest rate in Wales and one of the highest in the UK – and case numbers are expected to rise, the Welsh Government said.

Health minister Vaughan Gething said: ‘We have seen a significant rise in cases in Caerphilly borough over a very short space of time, which are linked to holiday travel abroad and people socialising indoors and not following social distancing guidelines.

Community testing was introduced in Caerphilly at the weekend.

On Saturday, 450 people were tested and 19 had the virus – giving a positivity rate of 4 per cent, which indicates that Covid-19 is circulating in the community.

Caerphilly Council has already introduced measures such as suspending care home visits, and introducing weekly testing for care home staff, in response to the increase in cases.

Philippa Marsden, leader of Caerphilly Council, said: ‘We need to create a break in the cycle of infection we are seeing in Caerphilly borough at the moment and unfortunately that means introducing new, tougher restrictions.

‘I would urge everyone living in the area to follow these new measures; to follow the social distancing guidelines and to wash their hands regularly.

Earlier on Monday, Public Health Wales reported the highest number of positive Covid-19 cases in months and warned of a ‘significant’ rise in the Caerphilly area.

It said that a further 133 people had tested positive for coronavirus, representing the highest daily figure since June 27, when 140 cases were reported.

There were no further deaths in people with coronavirus, with the total in Wales since the beginning of the pandemic remaining at 1,597.

Numerous schools have been affected by coronavirus since the start of the autumn term, including one class of 21 pupils at a primary school in the Caerphilly area being told to self-isolate for 14 days.

Dr Giri Shankar, of Public Health Wales, appealed to everyone in the Caerphilly area to use a local testing unit at the town’s leisure centre if they were experiencing ‘even the mildest’ of symptoms or feeling ‘generally unwell with no explanation’.