A 4.48-billion-year-old Martian meteorite found on Earth has been traced back to one of the red planet’s 90 million visible craters by West Australian astro-geologists.

The discovery by the researchers from Curtin University’s Space Science and Technology Centre in Perth will provide insights into the evolution of planets in the solar system, which itself formed 4.57 billion years ago. 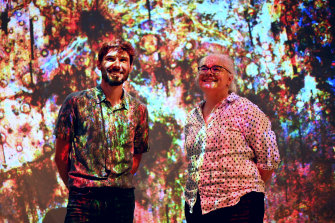 A paper published on Tuesday in Nature Communications details how the Black Beauty meteorite, which weighed 320 grams and was found in North Africa in 2011, comes from the Southern Hemisphere of Mars in an area home to some of the planet’s oldest rock.

The discovery was made possible after a team of scientists at Curtin developed an algorithm, processed by the Pawsey Supercomputing Research Centre, to create a dataset of impact craters on Mars which found about 90 million over the size of 25 metres in diameter.

This data was used to create a heatmap which uses colour to show the range in ages the craters were formed.

Lead author on the new paper Dr Anthony Lagain was able to work out which of the millions of craters Black Beauty came from with a bit of rock-and-mineral detective work.

Black Beauty is unique in that it is the only breccia-type rock – a mixture of minerals or other rocks cemented together – out of the 300 Martian meteorites identified as such after landing on Earth.

Previous research into Black Beauty has found that samples of the mineral zircon in it are from about 4.48 billion years ago.

But other minerals and pieces of the meteorite can be dated from 1.5 billion years ago and about 5-10 million.

Lagain was able to rule out the Northern Hemisphere as the source given its rock was lot younger.

He narrowed down the exact ejection site where Black Beauty came from, when something has struck the Martian surface launching the rock into space, to an unnamed crater now known as Karratha after a town in WA’s Pilbara region, which has some of the oldest rock from Earth’s formation. 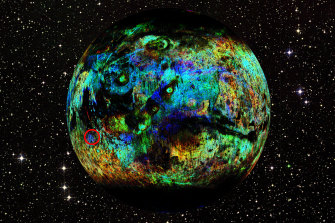 The source crater for Black Beauty was found in the Southern Hemisphere of Mars which is highlighted in red on this map of the planet’s craters.Credit:Curtin University

Karratha, the crater, is 10 kilometres wide and sits inside a larger crater named after another Pilbara town, Dampier.

“All of these configurations to excavate a piece of rock and then eject it in space is quite rare to obtain. That’s why we only have one Martian breccia on Earth,” Lagain said. 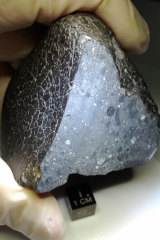 “We do think that actually this place might be the oldest portion of the crust of Mars formed, basically 4.5 billion years ago, right after the formation of the planet.

“It would be very interesting to visit that place.

“On Earth we do not have such old pieces of rocks to understand how the Earth evolved. However, on Mars, we get that thanks to Black Beauty.”

Cosmic mineralogist and astro-geologist Professor Gretchen Benedix was a co-author on the paper and said being able to find exactly where Black Beauty came from was an exciting development.

She said on Earth we could date back as far as about 4.3 billion years but there was only about 20 million years between the oldest rock on Mars to when the solar system formed.

“So we’re right at what we think is the very beginning, the start of the solar system,” Benedix said.

“And so the fact that this thing has crystallised at that point, that’s helping us to understand, when does all of that start to solidify instead of just being molten all the time.”

Curtin researchers will be able to turn their crater algorithm to Earth’s moon and Mercury in the future to understand their geological histories better.

The supercomputer could also be trained to identify other features on Mars like washout channels or volcanos and help scientists figure out where the youngest surface on the planet might be.