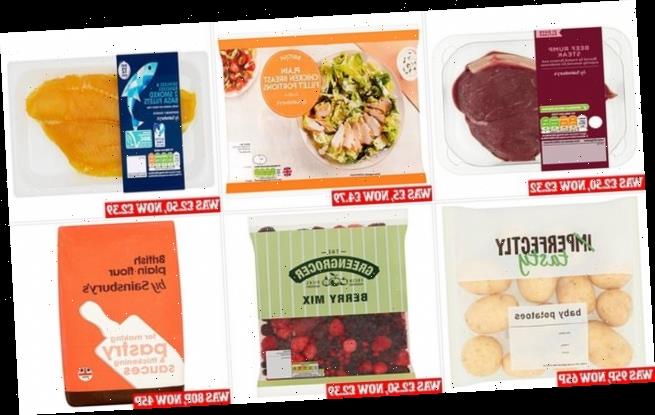 Sainsbury’s wades into supermarket price war by slashing cost of hundreds of grocery items to match rival Aldi including reducing kilo of flour from 80p to 40p and rump steak from £2.50 to £2.32

Sainsbury’s has today waded into the supermarket price war by slashing the cost of hundreds of its most popular food and drink items to match discount rival Aldi.

The grocery chain said it is launching the scheme to ‘help shoppers who are working hard to balance budgets, with the events of the past year continuing to put pressure on people’s purses’.

It comes against a backdrop growing pressure from German discounters Aldi and Lidl, whose low prices are forcing the biggest UK supermarkets to replicate in order to stay ahead.

However, unlike the other market leaders, both Aldi and Lidl have failed to benefit substantially from the surge in demand for online orders and home deliveries since the pandemic fully impacted the UK. 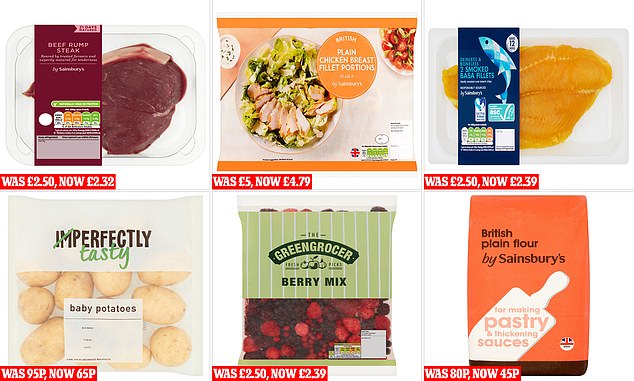 Sainsbury’s said its commitment will mean that around 250 products will see prices reduced to match the equivalent items at Aldi.

It said the move will focus on its most popular items with customers, including meat, chicken, fresh fruit and vegetables, and dairy.

Mark Given, chief marketing officer, said the price reductions will be funded by a ‘significant investment’ by Sainsbury’s.

‘We recognise that giving customers good value is a core part of our strategy so will invest to keep prices low,’ he said.

‘When we’ve completed research, our shoppers have highlighted our quality and value for money, but with customers who also shop in other supermarkets we need to improve our price perception.

‘We need to communicate this better with customers because the value is there.’

The price match is the first new initiative of chief executive Simon Roberts’ plan, announced in November, to put food back ‘at the heart of the business’.

Mr Roberts added: ‘We are making great progress delivering our Food First plan and I’m determined that in these tough times, we do even more to help our customers save money.

‘Our new commitment to match Aldi prices on hundreds of our most popular products will mean our customers can be confident that they are getting the quality they expect from Sainsbury’s at great prices.’ 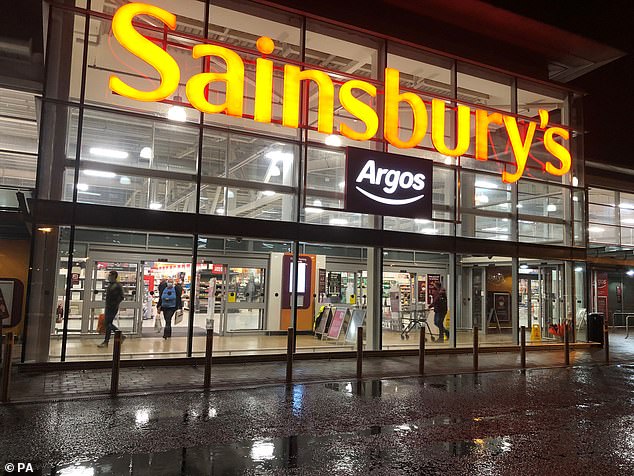 Sainsbury’s said it is launching the scheme to ‘help shoppers who are working hard to balance budgets, with the events of the past year continuing to put pressure on people’s purses’ 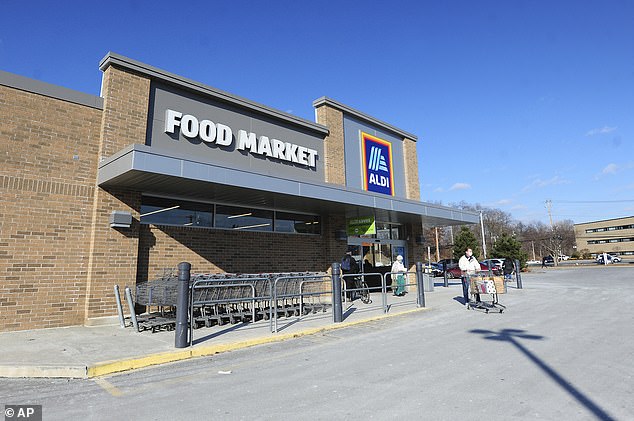 It comes against a backdrop growing pressure from German discounters Aldi and Lidl, whose low prices are forcing the biggest UK supermarkets to replicate in order to stay ahead

The cuts, which will primarily involve own-brand products, come almost a year after Tesco launched its own Aldi price match scheme to keep its prices in competition with the fast-growing discounters.

Aldi has seen its rapid sales growth fall behind some of its rivals during the pandemic, as its smaller online proposition meant it has not been able to fully take advantage of the booming demand for home deliveries.

Figures from Kantar showed that Aldi sales grew by 5.7% in the 12 weeks to January 24, compared with 12.2% growth across the UK grocery market as a whole.

Sainsbury’s sales were 12% higher for the period after expanding its online delivery capacity, according to the data.

A study last month found Lidl and Aldi were the cheapest supermarkets of 2020, with Waitrose coming in as the most expensive, and Sainsbury’s in sixth, behind Asda, Tesco and Morrisons.

Researchers tracked the price of 45 popular products such as Hovis bread, Knorr stock cubes and free-range eggs in eight major supermarkets for at least 100 days between January and December 2020.

The average price of each item over the year and the total average cost of all 45 items in the ‘trolley’ – taking the weight and quality of items into account – was calculated by consumer group Which?

Aldi announced in September it will open 100 new stores and create 4,000 jobs after profits surged by 49 per cent in a year.

The discount giant plans to pump £1.3 billion of investment into the stores by the end of 2021.

Britain’s favourite supermarkets – how and when were they founded

1869 – Sainsbury’s was founded by John James and Mary Ann Sainsbury as a dairy shop in London. It became popular for offering good-quality items for low costs and had three branches in other market streets by 1882. That same year, their first own-brand product, bacon, came in. It had an operating income of £312million in 2019.

1899 – Morrisons was founded as an egg and butter merchant by William Morrison who had a stall in Bradford market. Its first self-service shop was formed in 1961. It had an operating income of £513million in 2020.

1919 –  Tesco founder Jack Cohen sets up a market stall selling surplus groceries in London. In 1924, he used the name Tesco for the first time when he sold his first own-brand product, Tesco Tea. In 1929, the first Tesco shop was born. Tesco had an operating income of £2,96million in 2020.

1949 – Associated Dairies & Farm Stores – which would eventually become Asda – was set up in Leeds. In 1965, the store became Asda when it merged with the Asquith chain of supermarkets. Asda combines Asquith and Dairies for its name.

1961 – The lbrecht family opened their first Aldi store in 1961 in Germany making it the first-ever discount supermarket in the world.

1973 – The first modern Lidl store opens in Ludwigshafen, Germany, with just three employees and 500 products.  In the 1990s, Lidl stores popped up across Europe. Now, there are 11,200 Lidls across the world – with 310,000 employees. One of Lidl’s cost-cutting techniques include keeping all its shelves exactly the same size in every store meaning they can calculate exactly how much they need, keeping overheads down.

2000 – Ocado was founded by bankers Jonathan Faiman, Jason Gissing and Tim Steiner and was initially called L.M. Solutions. In October 2000, it partnered with Waitrose and, in June 2001, the name Ocado was born. It started delivering food orders 2002. 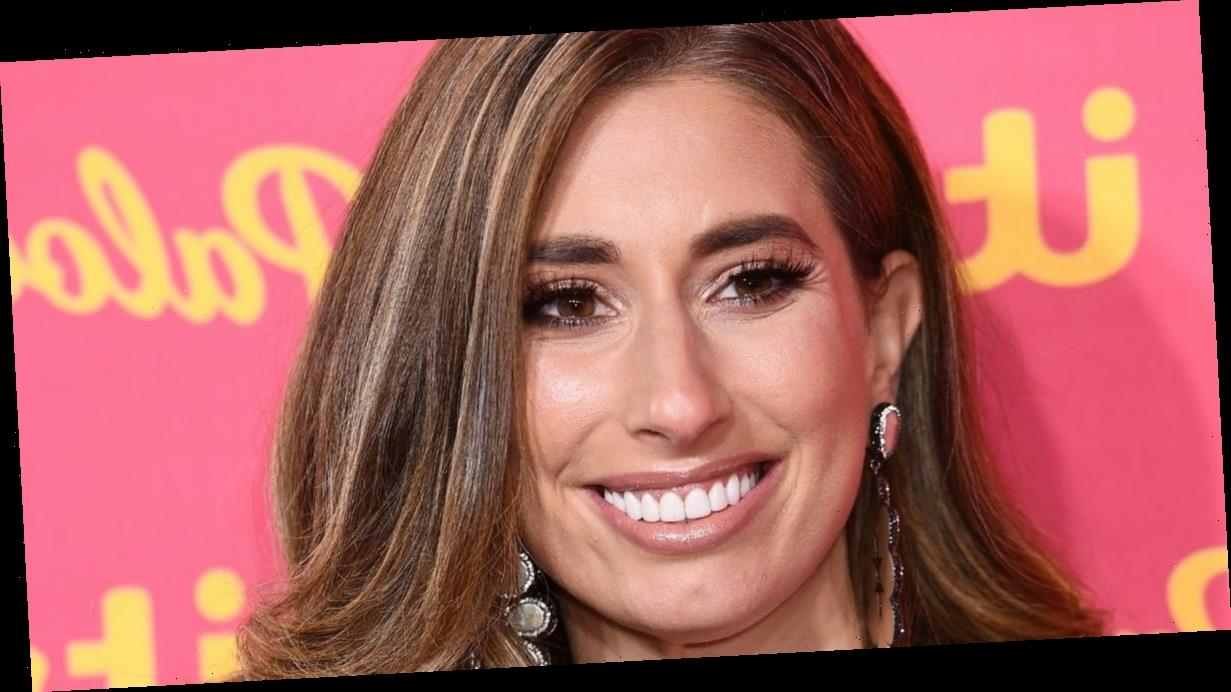