British sailor, 23, who has cerebral palsy sets off on 3,000-mile voyage across Atlantic – and will steer yacht by breathing into a straw after practising in her kitchen at home

A disabled sailor who controls her boat by breathing into a straw has set off across the Atlantic Ocean after preparations for the trip were beset by problems.

Natasha Lambert set sail from the Canary Islands on Sunday with a course set for Saint Lucia in the Caribbean.

The 23-year-old, who has cerebral palsy, is making the 3,000 mile Atlantic crossing with her family on 46ft Catamaran named Blown Away.

But her trip almost did not go ahead after the computer she uses to control the boat smashed as she flew through Gatwick Airport. 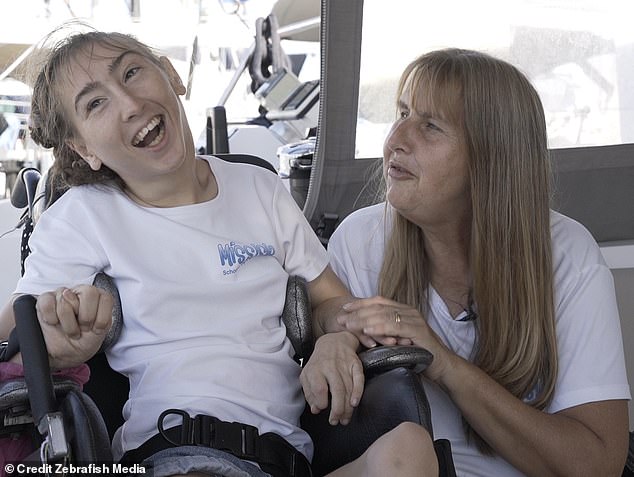 Disabled sailor Natasha Lambert, 23, is sailing across the Atlantic and controls her boat by breathing through a straw 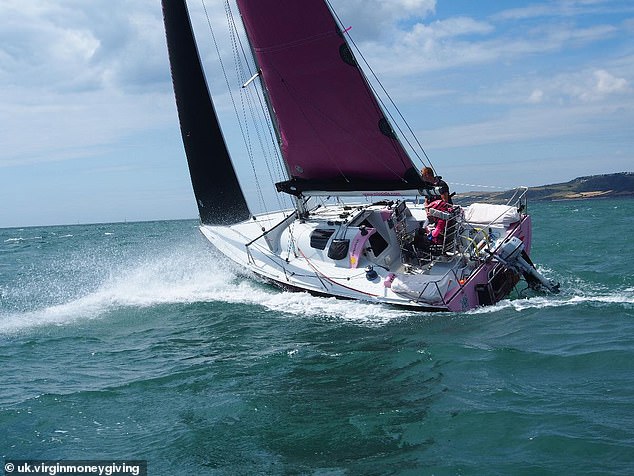 But her trip almost did not go ahead after the computer she uses to control the boat smashed as she flew through Gatwick Airport. Pictured: One of the boats Natasha can sail using her breath technique 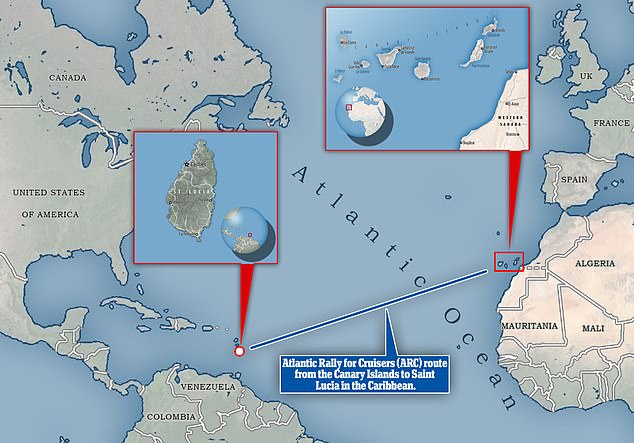 The Atlantic Rally for Cruisers (ARC) event will see sailors travel 3,000 miles across the Atlantic Ocean from the Canary Islands to Saint Lucia in the Caribbean

The starboard prop on her boat also came loose a few days before the Atlantic Rally for Cruisers (ARC) event started.

The water maker then sprung a leak and her vessel’s power sources had issues.

‘It’s been all go. Absolute chaos,’ her mother Amanda, from Cowes on the Isle of Wight, said.

‘Natasha has a special computer she can use for communication, but it’s also the one she uses to steer the boat, so it’s a really important piece of kit.

‘But it got smashed as we came through the airport at Gatwick.

‘We spent a lot of time on the telephone trying to fix that but fortunately our crew came out a few days later and they were able to bring us a brand new computer.’

In the run up to their departure the family was busy trying to load all the programmes she needs to control her boat, including weather apps, onto the laptop. 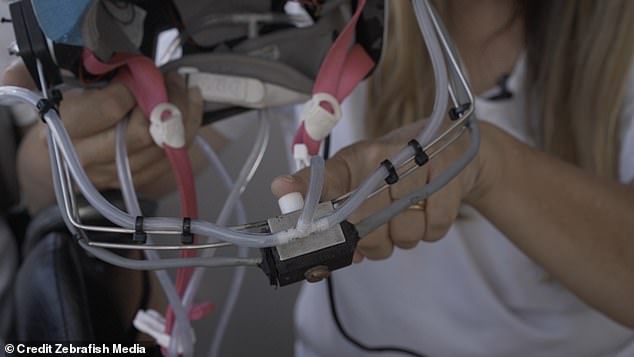 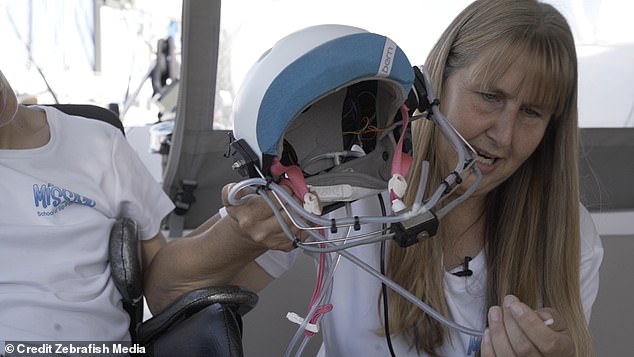 The straw is connected to sensors that allow Natasha to control the boat’s helm. There is also an internal switch so she can take control of the sails

The compter system allows Natasha to control the boat as it contains sensors to direct the boat’s helm.

Natasha controls the system using a straw mounted on a helmet.

There is also a switch inside the helmet which she can flick with her tongue if she wants to take control of the sails.

The system was adapted for Natasha by her father, Gary, a domestic electrician who taught himself programming using YouTube.

Parents Gary and Amanda and their daughter Rachel will make the crossing with Natasha.

Quadraplegic aailor Natasha was born with atheroid cerebral palsy, which affects the movement of her limbs.

In an interview with the crew of another boat taking part in the ARC event, Natasha’s mother told how her daughter first experienced sailing aged nine on a family holiday to the Lake District. 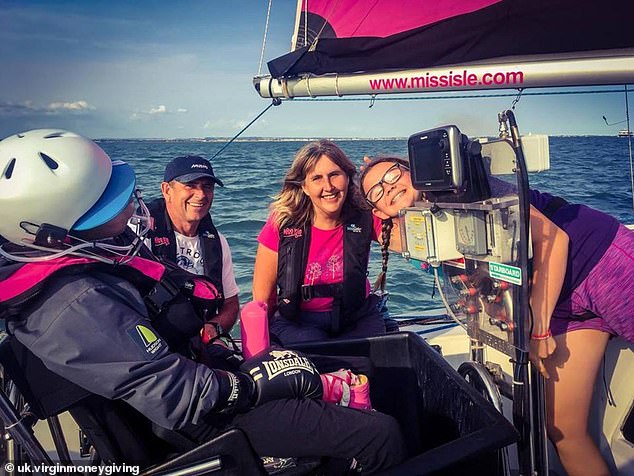 Natasha (far left) is sailing across the Atlantic with her family, father Gary, mother Amanda and sister Rachel, from the Isle of Wight, as part of the Atlantic Rally for Cruisers (ARC) event 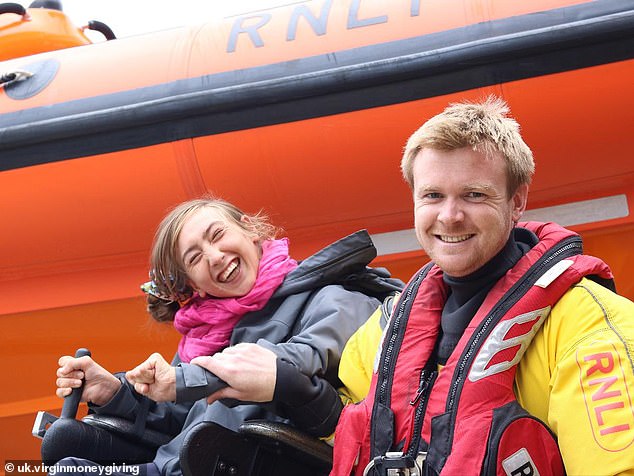 Natasha first learnt how to sail aged nine on a family holiday to the Lake District, and is driven by her ‘passion for travel and adventure’

Blown Away: The 46ft catamaran Natasha will sail across the Atlantic

Nataha Lambert is making the 3,000 mile Atlantic crossing with her family on a Nautitech Open 46 Catamaran.

The 46ft boat, called Blown Away, was chosen as it is a more stable vessel than a mono hull and also has more space to allow Natasha to move around.

The boat has been adapted to accommodate Natasha’s sip and puff control system and she has full access and visibility whilst controlling the boat from the helm.

It took two years for the boat to be converted and for Natasha to learn how to sail it before she could embark on their Atlantic voyage.

Other moderations include fitting the boat with folding ramps and a ceiling mounted track system so Natasha can be safely moved around.

The 23-year-old sailor sleeps in the cabin at the front of the left hull and there are another two double en-suite cabins for her parents and sister.

Her passion for the sport ignited, Natasha then learnt how to independently control a model sailing boat using the puff and sip technique.

Her father then helped adapt the method for her to control a full-size boat.

‘We had to come up with a method that worked for Natasha, and it had to be quick and responsive,’ her Amanda told the crew of Moonflower 3, who are filming a documentary about their ARC crossing.

‘We figured out one of the most reliable ways for Natasha to control the boat was using a staw.

‘She has always drunk from a straw, so we practiced in the kitchen with a glass of water, and we would tell her to sip and puff.

‘We realised she could do it instantaneously, so it meant she could turn a boat and work the tiller.

‘It needed to be quick because when making those decisions you have to be able to do it in a split second.’

A keen fundraiser Natahsa took on a number of sailing challenges to raise money for charity.

She has competed in the Round the Island race from Cowes, crossed the Channel to France, sailed to London up the Thames, and also sailed to Wales before climbing Pen y Fan using a walking frame.

Her mum says she is driven by her ‘passion for travel and adventure’.

But it was meeting Dame Ellen MacArthur, the award-winning sailor, that inspired her to take on her biggest challenge yet. 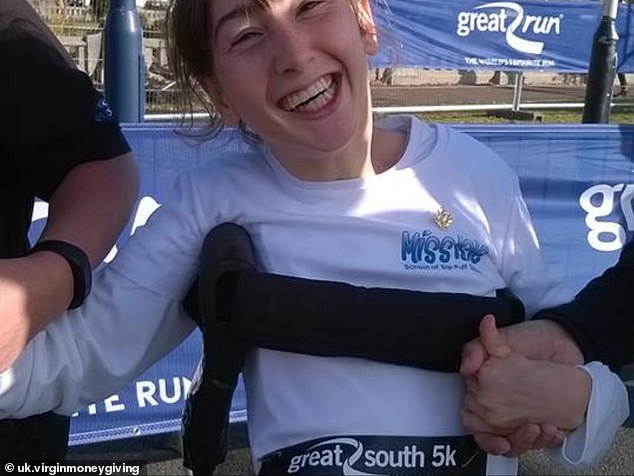 Natasha is raising money for three charities during her crossing – The Ellen MacArthur Trust, the RNLI and The Missile Charity that helps other young people with similar conditions as Natasha to learn how to sail

They discussed Dame MacArthur’s sailing experiences after she presented Natasha with a book on piloting across the Atlantic as an award for her fundraising efforts.

‘We came away from that meeting and Natasha was completely sold on the idea,’ recalls mum Amanda.

‘She was convinced that this was her next aim.’

Her parents, who are sailing with her across the Atlantic, were not initially sold on the idea.

‘My husband and I weren’t so keen on this in the beginning,’ said Amanda.

‘It’s not something we ever expected to do, and we are completely out of our comfort zone.

‘When we started this I was terrified. And ever coming on the journey down I was very concerned and didn’t really like some of the experiences. But in the end I think the whole event and taking part as a group will be fantastic.’

Natasha is raising money for three charities during her crossing – The Ellen MacArthur Trust, the RNLI and The MissIsle Charity that she established to help other young people with similar conditions learn how to sail.

‘She can show people what is possible by going on this adventure,’ said Amanda.

‘It might make other people think that they can perhaps do more than they imagined. So we hope it opens doors to more people.’