Six militants who were planning terrorist attacks on law enforcement officers have been killed in the Republic of Dagestan in southwest Russia.

The militants were believed to be linked with the Islamic State, with the planned attacks co-ordinated by an IS emissary.

However, the Russian National Anti-Terrorism Committee (NAC) confirmed on Friday that they had taken out a special operation to take out the militants after they were spotted in the Khasavyurt district. 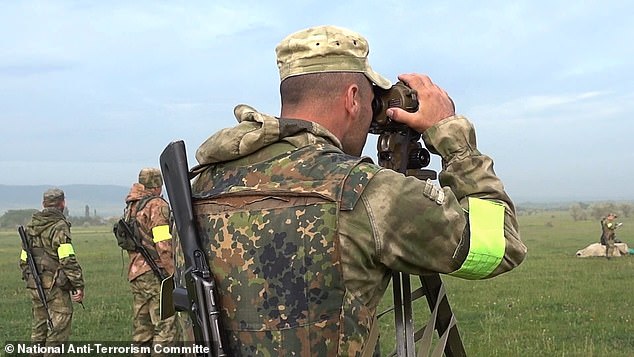 Six militants believed to be part of an Islamic State terrorist group, were killed by Russian forces (pictured) in the Republic of Dagestan 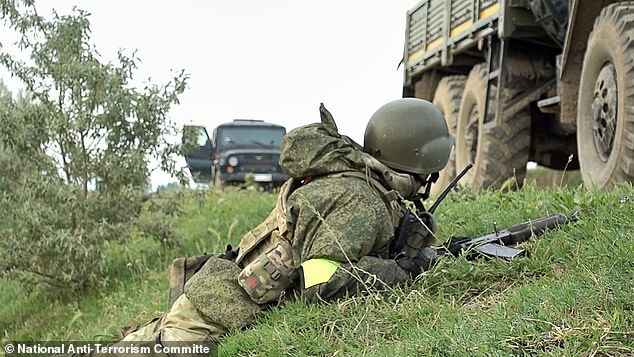 A statement from the NAC on Friday said: ‘Security authorities obtained information about the presence of a group of six armed bandits who carried out the intention to commit terrorist crimes in the forest located north of the village of Goksuv.

‘In an attempt to detain, the criminals put up armed resistance to law enforcement officers using automatic weapons and grenades. The bandits were neutralized by return fire.

‘One special forces officer was injured. He received the necessary medical care.

‘There were no civilian casualties. Weapons and ammunition were discovered at the clash site.’

The statement also claimed the militants were also targeting religious leaders as well as looking to raise funds for terrorist activities.

It continued: ‘According to reports, the neutralized bandits were associated with the international terrorist organization ISIS.

‘They coordinated their actions with its emissary and planned to commit a series of terrorist crimes, [including] attacks on law enforcement officials and religious leaders, as well as extorting money from entrepreneurs to finance terrorist activities.’ 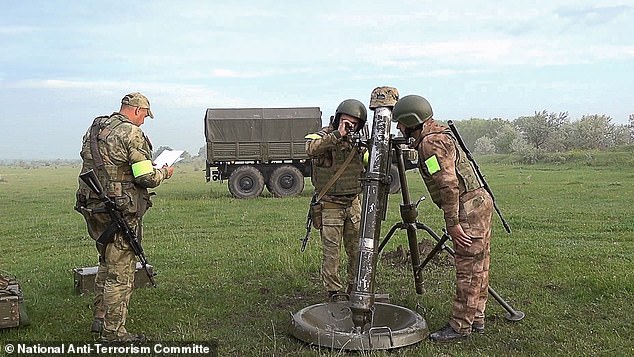 Clashes between Russian and Islamic forces have taken place over the past 20 years, dating back to Islamic threats of a holy war in 1999

Violent clashes between Russian and Islamic forces have been commonplace over the last 20 years.

In September 2018, Abas Khubayev, the leader of a terrorist groups involved in multiple attacks on and murder of law enforcement officers and civilians in the same region, was also liquidated by Russian forces in similar circumstances.