Russia stops gas supplies to Finland: Putin turns off the taps after months of sabre-rattling following Helsinki’s announcement it will join NATO

Russia has stopped delivering natural gas to Finland after it refused to pay in rubles and just days after it applied to join NATO.

Warring president Vladimir Putin has been demanding payments in the Russian currency in a bid to ease the pressures of sanctions, which were applied by the West following his barbaric invasion of Ukraine in February.

Russian energy giant Gazprom said it had ‘completely stopped gas deliveries’ as it had not received ruble payments from Finland’s state-owned energy company Gasum ‘by the end of the working day on May 20’.

It comes after Russia cut off its supply of electricity to the Nordic country earlier this month, while other European countries who refused to pay in rubles, including Bulgaria and Poland, had their gas supplies stopped in April.

Finland is not overly reliant on Russian gas, or electricity, but it is little surprise that the move to cut the country off came four days after the Helsinki signed its application to join NATO after decades of careful neutrality with regards to Russia.

It comes as Foreign Secretary Liz Truss has suggested equipping Moldova with NATO standard weapons in case Putin decides to extend his war.

She accused the Russian president of wanting to create a ‘greater Russia’ and feared Moldova, south-west of Ukraine, could be Moscow’s next target. 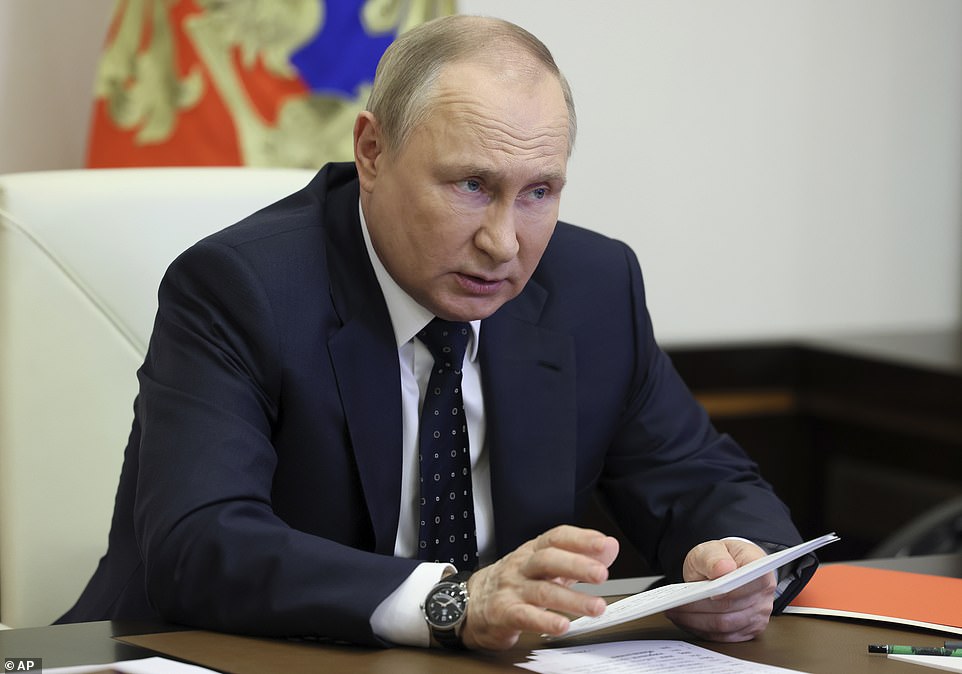 Warring president Vladimir Putin has been demanding payments in rubles in a bid to ease the pressures of sanctions, which were applied by the West following his barbaric invasion of Ukraine 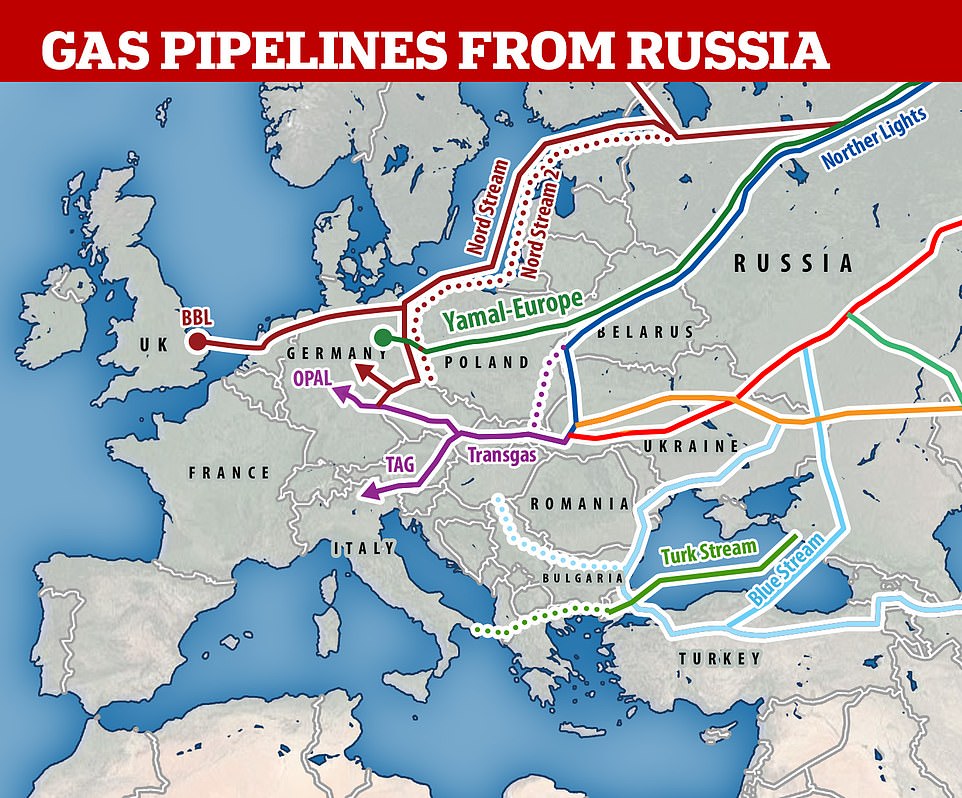 Russia has long been a major supplier of natural gas to Europe, with the threat of cutting off supplies often used as leverage over the years 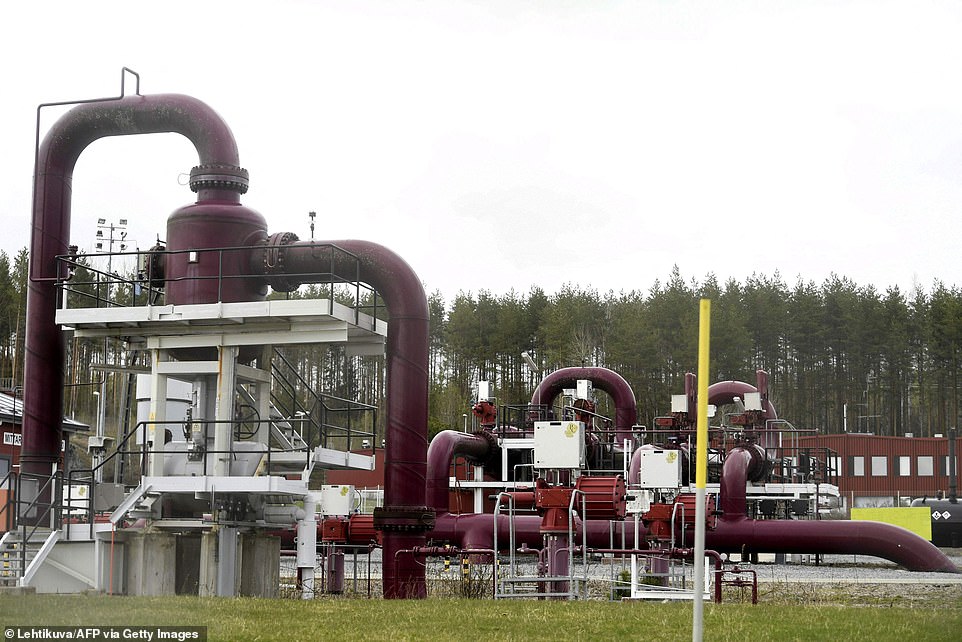 Russian energy giant Gazprom said it had ‘completely stopped gas deliveries’ as it had not received ruble payments from Finland’s state-owned energy company Gasum ‘by the end of the working day on May 20’. (Pictured: Pipes at Gasum plant in Raikkola, Finland) 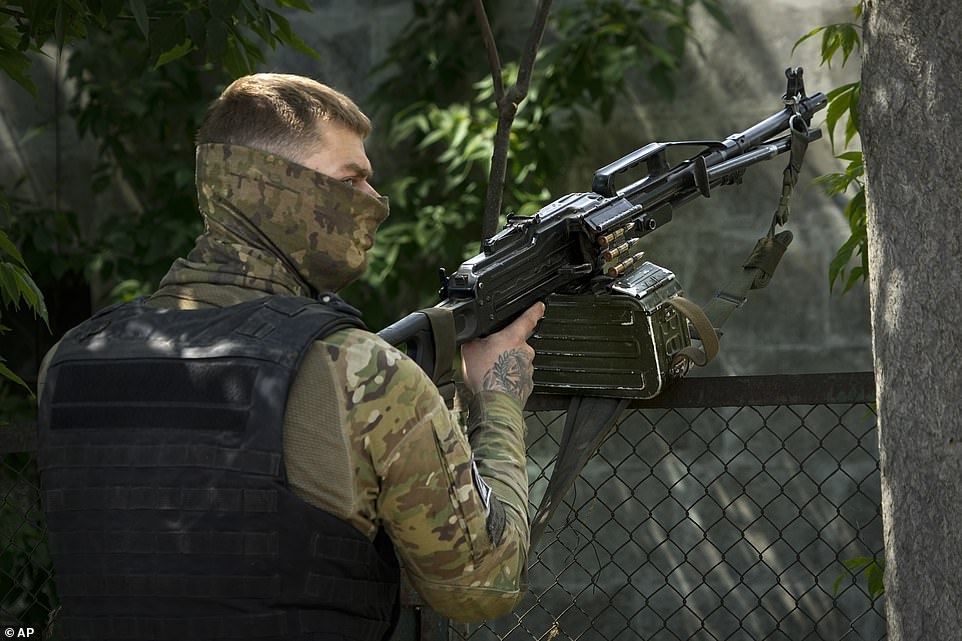 A Russian soldier guards an administrative area of Khersonvodokanal in Kherson southern Ukraine on Friday, May 20, 2022 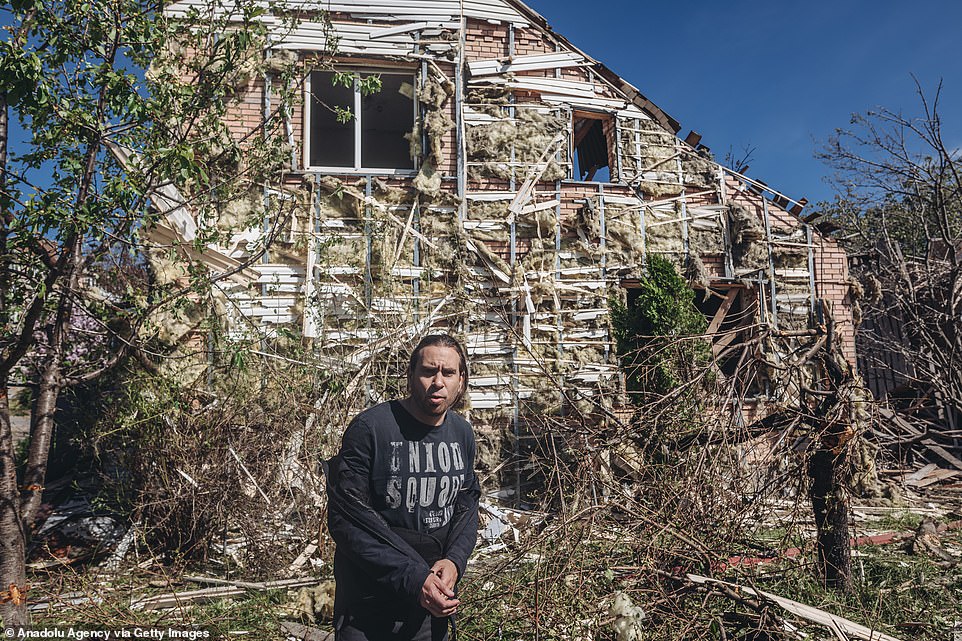 A Ukrainian man stands by his destroyed home on Friday following Russian shelling in Bakhmut, Ukraine 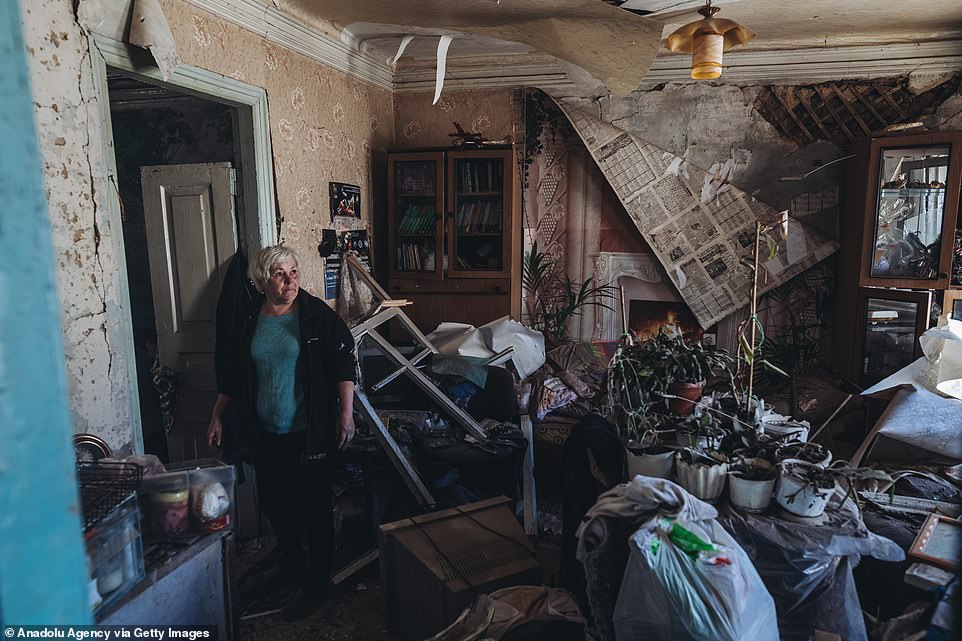 A woman takes stock of the damage to her home on Friday following shelling by Putin’s forces in Bakhmut, Ukraine

Meanwhile, Putin’s bloody assault on Ukraine continues at pace, with the dictator claiming to have taken the strategic port city of Mariupol in the east of the country.

Gazprom said it had supplied 1.49 billion cubic metres of natural gas to Finland in 2021, equal to about two thirds of the country’s gas consumption.

However, natural gas accounts for around eight percent of Finland’s energy.

Gasum said it would make up for the shortfall from other sources through the Balticconnector pipeline, which links Finland to Estonia, and assured that filling stations would run normally.

‘Natural gas supplies to Finland under Gasum’s supply contract have been cut off,’ the company said in a statement.

In April, Gazprom Export demanded that future payments in the supply contract be made in rubles instead of euros.

Gasum rejected the demand and announced on Tuesday it was taking the issue to arbitration.

Gazprom Export said it would defend its interests in court by any ‘means available’. 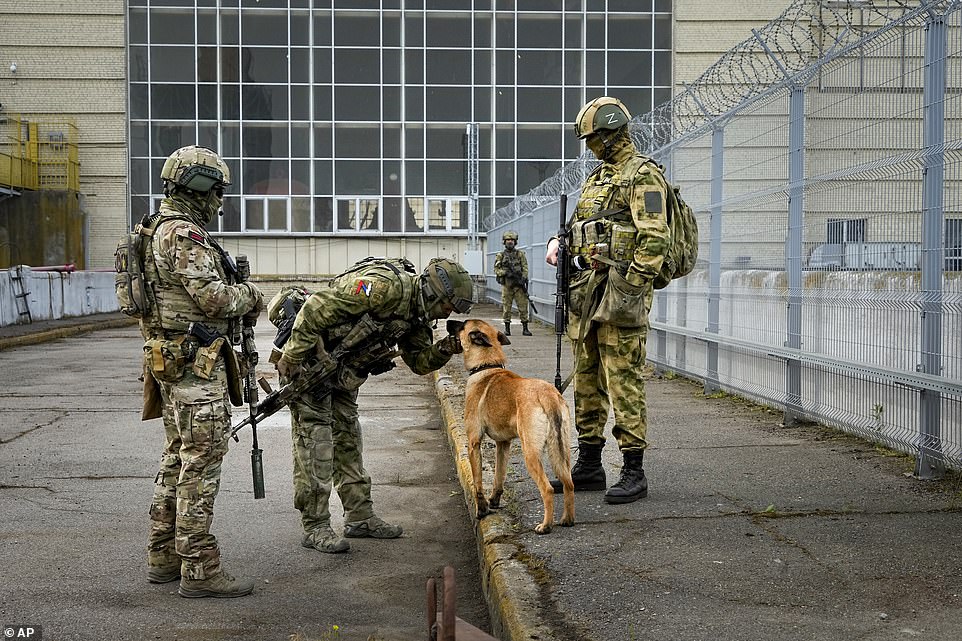 Russian troops pet their military dog as they guard an entrance of the Kakhovka Hydroelectric Station, a run-of-river power plant on the Dnieper River in Kherson region, south Ukraine, on Friday 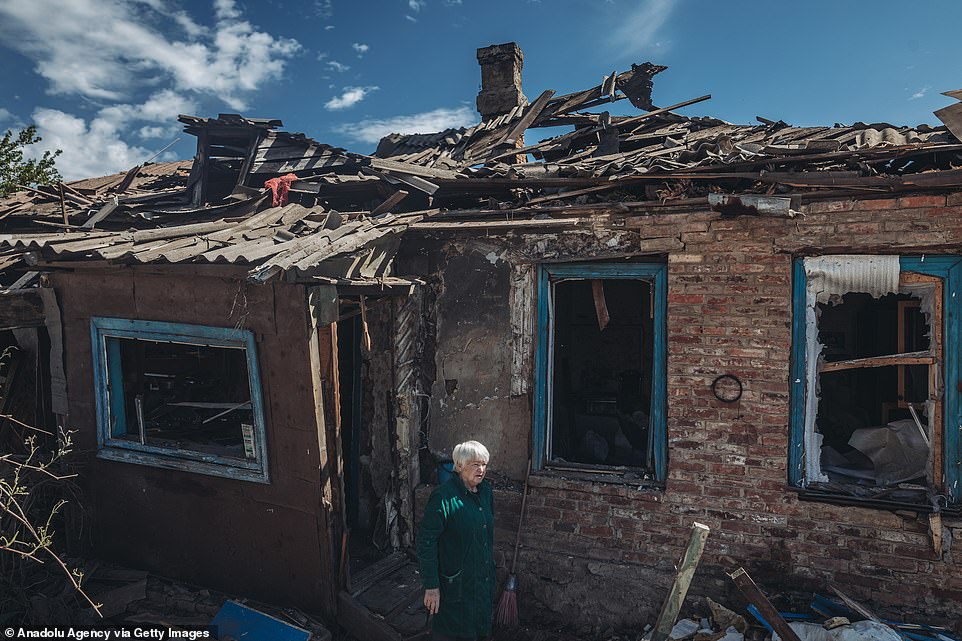 A woman stands in front of her bombed house in Bakhmut, Ukraine, as Russia prepares for another offensive in the east of the country 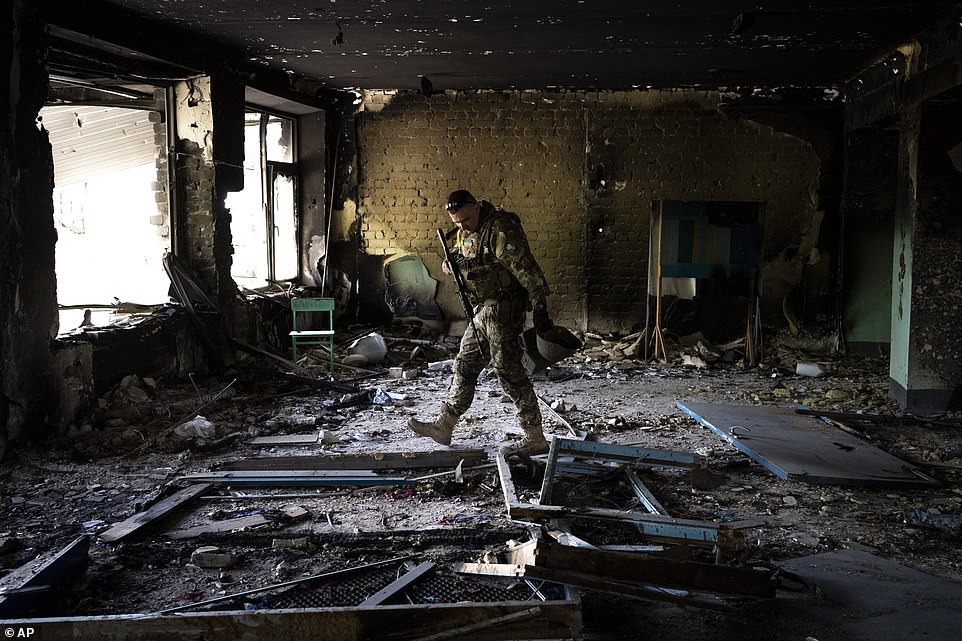 A Ukrainian serviceman inspects a school damaged during a battle between Russian and Ukrainian forces in the village of Vilkhivka, on the outskirts of Kharkiv, on Friday

Gasum said it would be able to secure gas from other sources and that gas filling stations in the network area would continue ‘normal operation’.

In efforts to mitigate the risks of relying on Russian energy exports, the Finnish government on Friday also announced it had signed a 10-year lease agreement for an LNG (liquefied natural gas) terminal ship with US-based Excelerate Energy.

It comes as Russia is now pressing for control of Ukraine’s Donbas region, claiming victory in the months-long battle for Mariupol’s steel plant and launching a major offensive on the remaining Ukrainian-held territory in the province of Luhansk.

‘The territory of the Azovstal metallurgical plant … has been completely liberated,’ the ministry said in a statement, adding that 2,439 defenders had surrendered in the past few days, including 531 in the final group.

Ukraine’s General Staff of Armed Forces did not comment on Russia’s claim in its morning update on Saturday.

Russia also launched what appeared to be a major assault to seize the last remaining Ukrainian-held territory in Luhansk, one of two southeastern Ukrainian provinces Moscow proclaims as independent states.

Serhiy Gaidai, the governor of the Luhansk region, said in a social media post early on Saturday that Russia was trying to destroy the city of Sievierodonetsk, with fighting taking place on the outskirts of the city.

‘Shelling continues from morning to the evening and also throughout the night,’ Gaidai said in a video post on the Telegram messaging app.

In early hours on Saturday, air raid sirens were going off in much of Ukraine, including in the Kyiv capital region and the southern port of Odesa.

Capturing Luhansk and Donetsk provinces, much of which make up Ukraine’s industrial Donbas region, would allow Moscow to claim a victory after announcing last month that this was now its objective.

Despite losing ground elsewhere in recent weeks, Russian forces have advanced on the Luhansk front.

‘This will be the critical next few weeks of the conflict,’ said Mathieu Boulegue, an expert at London’s Chatham House think tank.

‘And it depends on how effective they are at conquering Sievierodonetsk and the lands across it.’

The city of Sievierodonetsk and its twin Lysychansk across the Siverskiy Donets river form the eastern part of a Ukrainian-held pocket that Russia has been trying to overrun since mid-April after failing to capture Kyiv.

Ukraine’s general staff said on Saturday that Russian forces were preparing to try again to cross the river, after a previous attempt earlier this month led to one of the largest battles in the conflict so far.

By Imogen Horton for the Daily Mail

Moldova could get modern weaponry to protect it from a Russian invasion, Liz Truss has said.

The Foreign Secretary revealed that talks were taking place to ensure the country had ‘Nato standard’ defences to discourage Vladimir Putin from embarking on any further expansion.

She accused the Russian president of wanting to create a ‘greater Russia’ and feared Moldova, south-west of Ukraine, could be Moscow’s next target.

‘I want to see Moldova equipped to Nato standard. This is a discussion we’re having with our allies,’ she told The Daily Telegraph.

‘Putin has been absolutely clear about his ambitions to create a greater Russia – and just because his attempts to take Kyiv weren’t successful, it doesn’t mean he’s abandoned those ambitions.’ 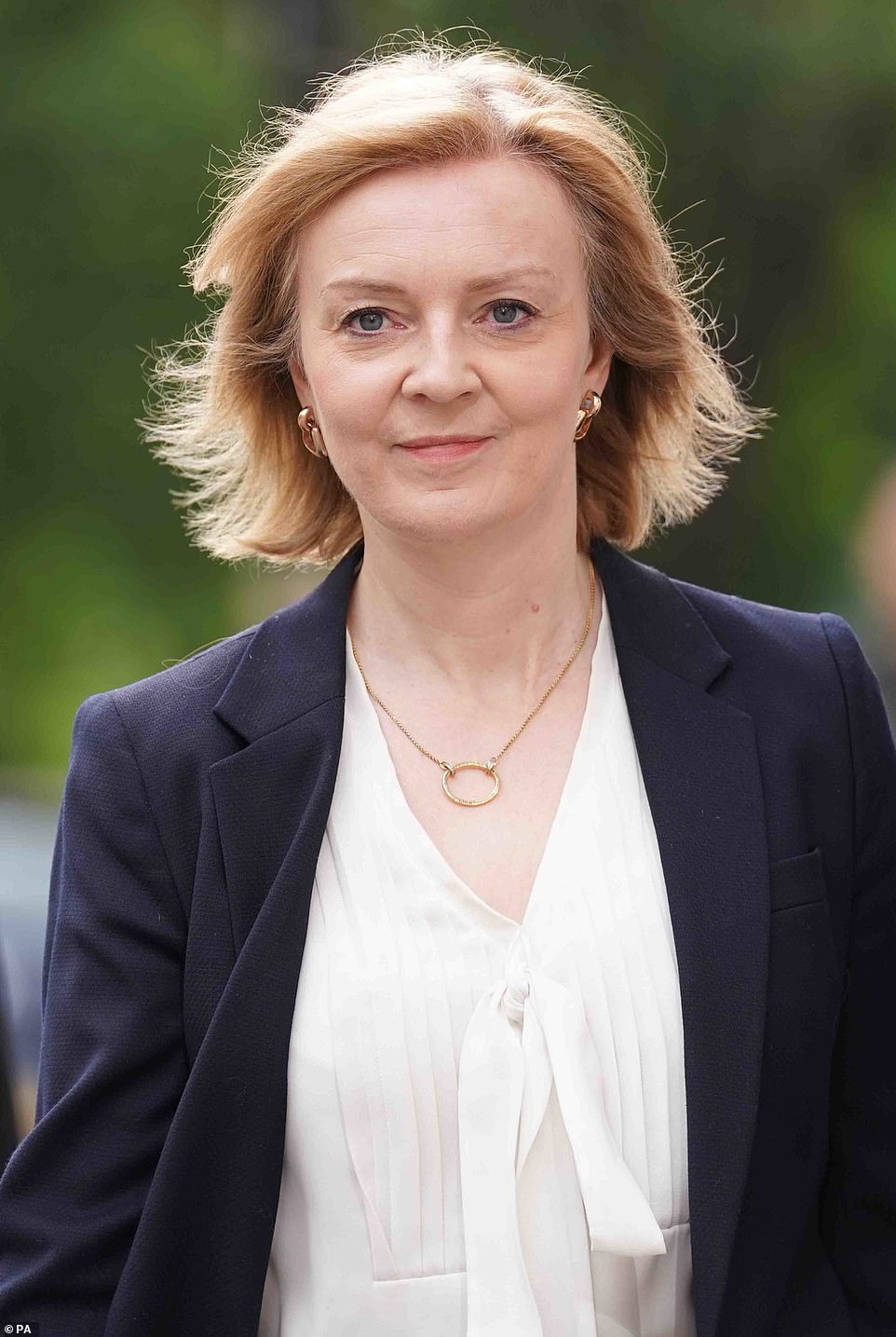 If the talks are successful, members of the Nato military alliance will send high-tech weaponry to the non-Nato member Moldova and train their military to use it.

This would replace the country’s Soviet-era equipment Moldova currently has.

Any sharing of military equipment would be indication that the UK and its allies see the invasion of Ukraine as a turning point in Russian relations.

Putin has previously signalled his intentions to join up with Russian-backed separatists in eastern Moldova.

Concerns were first raised when the Belarusian president, a long-time ally of Putin, Alexander Lukashenko appeared to reveal plans for an invasion of Moldova during a broadcast about Russian military movements in the early stages of the Ukraine war.

‘It is hell there’: Ukrainian President Zelensky says the Donbas region has been ‘completely destroyed’ by Moscow’s forces

President Volodymyr Zelensky has said the Donbas region in the east of the country has been ‘completely destroyed’.

His grim assessment came after weeks of Russia focusing its attacks and shelling in this area.

He added in an address to the nation: ‘It is hell there and that is not an exaggeration.’