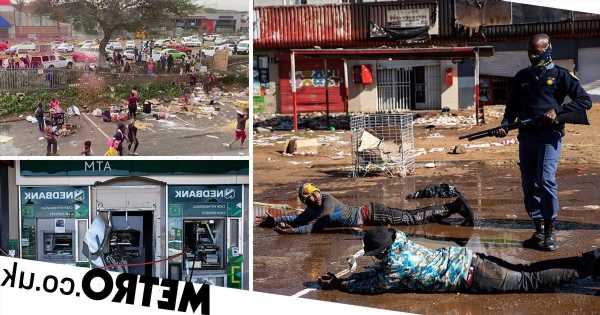 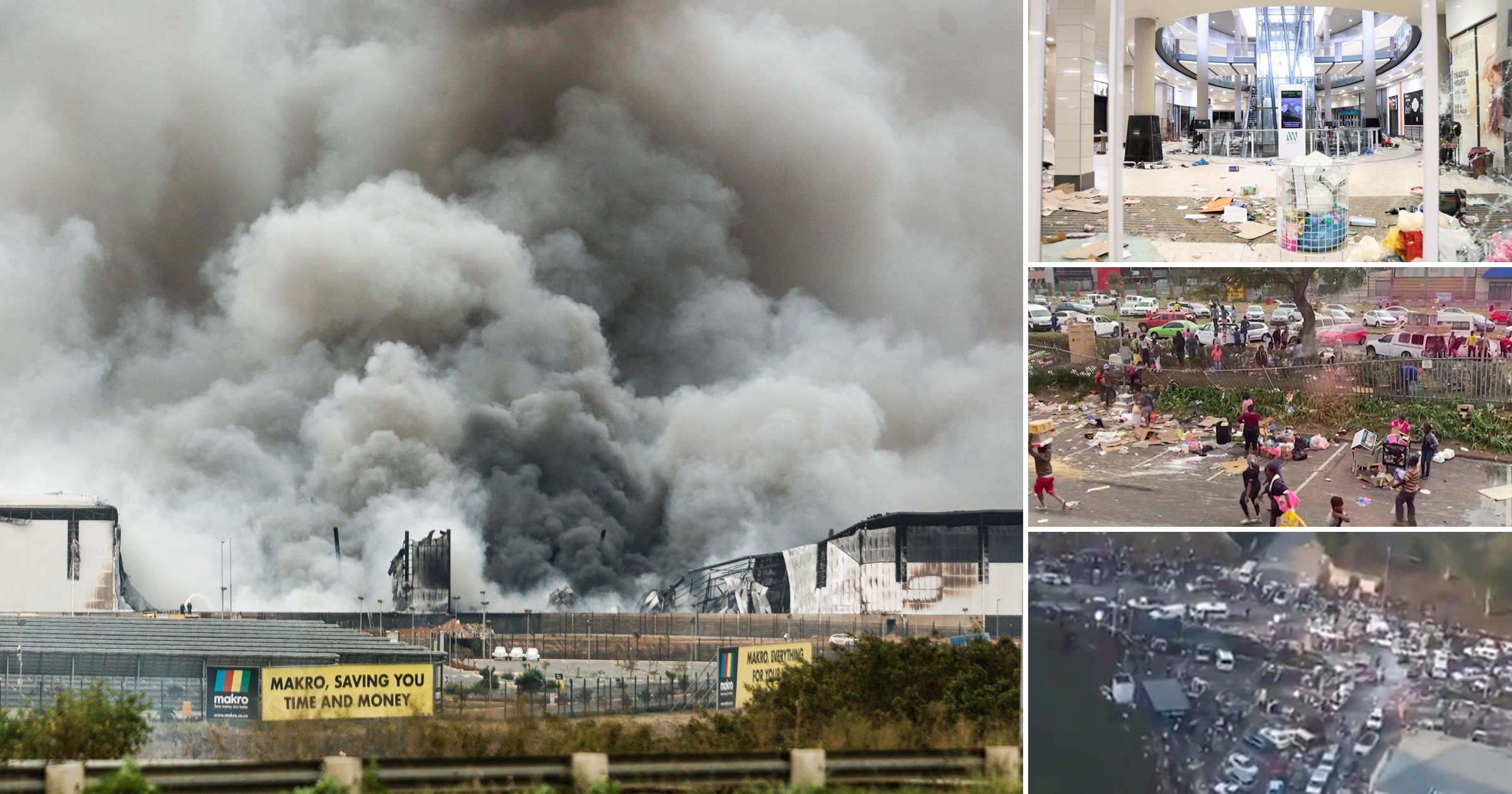 At least 72 people are dead amid looting, riots and chaos in South Africa.

Video footage shows roads littered with debris and virtually impassable after people pillaged countless businesses in what is thought to be some of the worst unrest since the end of apartheid.

Protests following the jailing of ex-President Jacob Zuma have descended into a week of violence as a third of wave of coronavirus grips the country.

Crowds looted shops and businesses on Wednesday, defying government calls to end the carnage that has wrecked hundreds of businesses and worsened the country’s latest health crisis.

Stores and warehouses were ransacked for a sixth day running, despite current President Cyril Ramaphosa deployed troops onto the streets.

Images show armed police forcing looters to lie on the floor, while reports suggest a hospital has been torched and that some shop keepers have fired on looters to protect their businesses.

Shopping malls and warehouses have been stripped and set ablaze in various places, mostly around where Zuma is from in KwaZulu-Natal (KZN) province, and the country’s biggest city Johannesburg and surrounding Gauteng province. 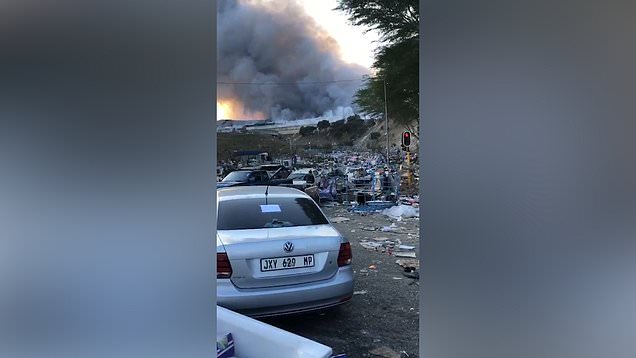 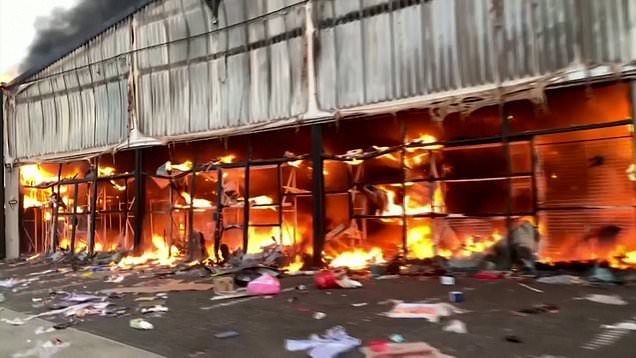 Overnight it spread to two other provinces – Mpumalanga, just east of Gauteng, and Northern Cape, according to police, while looting has also been reported in the town of Hammarsdale, Kwazulu-Natal; in South Africa’s largest township Soweto; and the city of Durban.

In a statement, police said most of the deaths were a result of ‘stampedes that occurred during incidents of looting of shops’.

Others were linked to shootings and explosions of bank ATMs.

The number of arrests had risen to 1,234 at the last count, although many thousands have been involved in the ransacking sprees.

TV pictures show dozens of women, some wearing dressing gowns, men and children strolling into a butcher in Soweto, coming out balancing heavy boxes of frozen meat on their heads or shoulders.

In Alexandra township, north of Johannesburg, hundreds of people came in and out of a mall to take groceries.

Looters said they had got caught up in the rush, or saw the chance to ease their poverty.

A 30-year-old man who works at a car wash admitted to ‘taking things from the shop for my mum’ and said: ‘I’m really not concerned about Zuma. He is a corrupt old man that deserves to be in jail.’

In Durban, aerial video shows hundreds of looters in a large shopping centre and taking huge boxes of goods.

A mother had previously been seen throwing her baby from the first floor of a building to save her from fire after shops below her apartment were set on fire.

The child safely landed with a group of people on the street.

Zuma was sent to jail after failing to appear at a corruption inquiry but demonstrations have now spiralled out of control into an outpouring of anger over the hardships and inequality that many still face 27 years after apartheid ended.

The National Hospital Network, representing 241 public facilities already under strain from Africa’s worst Covid-19 epidemic, said it was running out of oxygen and drugs – most of which are imported through Durban – and food.

Staff in affected areas were unable to get to work, it said, worsening shortages as the health crisis intensifies. 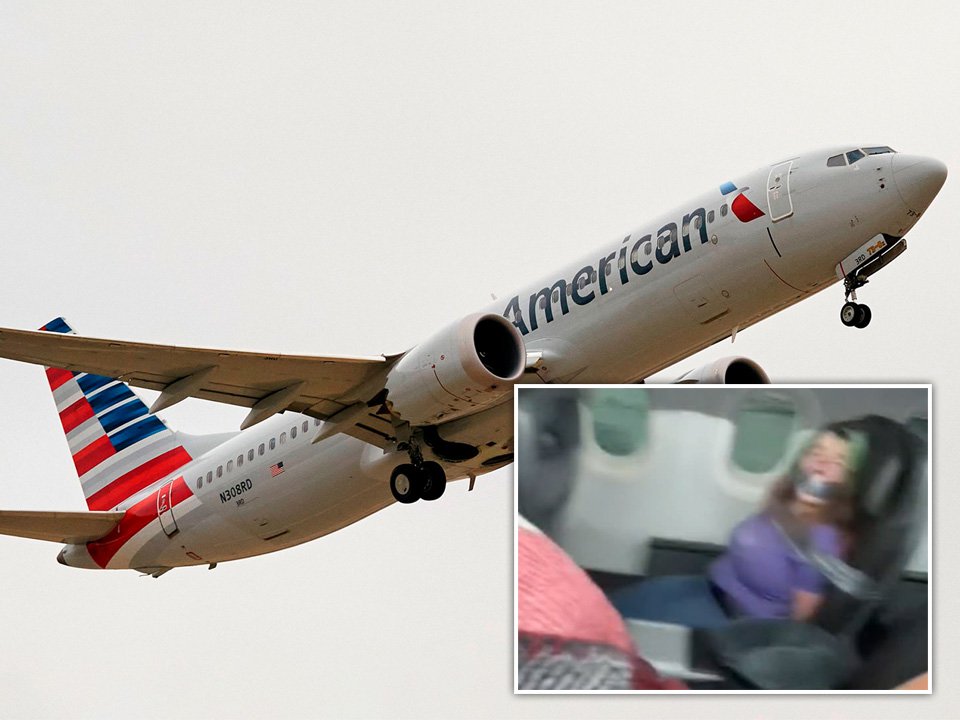 The network added: ‘The impact of the looting and destruction is having dire consequences on hospitals.

‘And the epicentre of the pandemic is within the affected provinces currently under siege.’

Severe poverty, unemployment and inequality, which is fuelling the unrest, have been worsened by harsh social and economic restrictions to battle the pandemic.

In a national address on Monday, President Ramaphosa blasted ‘opportunistic acts of criminality, with groups of people instigating chaos merely as a cover for looting and theft.’

‘The path of violence, of looting and anarchy, leads only to more violence and devastation,’ he said.

The country’s main opposition accused radicals of stoking the unrest.

The United Nations in South Africa expressed concern that disruptions to transport for workers from the riots would make things even worse.

In a statement it said: ‘This will exacerbate … joblessness, poverty and inequality.’

The armed forces have sent at least 2,500 soldiers to help the overwhelmed police.

But the numbers are dwarfed by the more than 70,000 troops deployed to enforce last year’s coronavirus lockdown, and only a handful of soldiers were seen at some shopping centres.