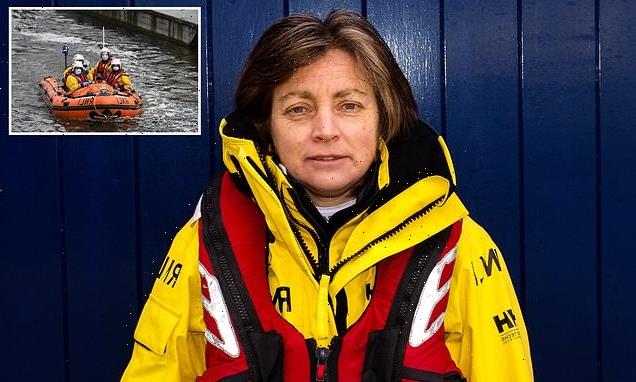 The RNLI has appointed a full-time female coxswain for the first time in its 200-year history.

The role at the Harwich Royal National Lifeboat Institution in Essex has been handed to Di Bush.

Ms Bush had been the station’s mechanic since 2017 after joining the organisation as a volunteer at Falmouth RNLI in Cornwall back in 2003.

‘Di is a trail-blazer in this regard and for some years now has been an inspiration to other women,’ said Sue Kingswood, RNLI inclusion and diversity manager.

The charity said it wanted more women to join its organisation in search and rescue roles.

Ms Kingswood added: ‘Across our organisation, the more role models we have which represent a greater breadth of diversity, the more successful we will be in our core purpose of saving lives at sea.’ 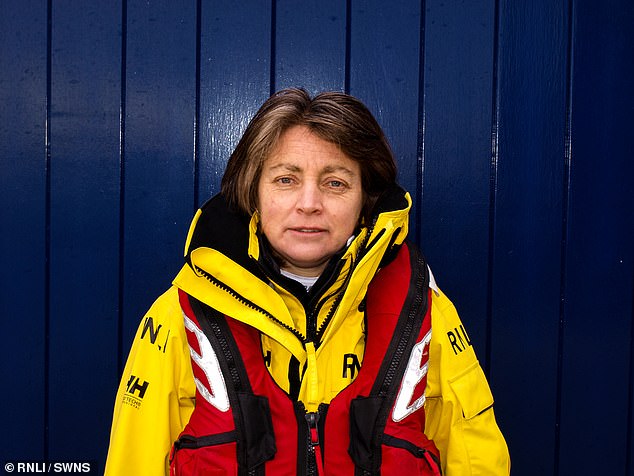 The service said female representation had increased hugely since 1969 when Elisabeth Hostvedt became the first fully qualified woman on a lifeboat crew.

The charity’s lifeboat crews now include over 600 women, the majority of lifeboat stations have a female crew member and about 20% of lifeguards are women.

The charity was founded in 1824 by Sir William Hillary and under the patronage of King George IV.

Sir William, who lived on the Isle of Man, was inspired to launch a 24/7 search and rescue service after seeing first hand how treacherous the Irish Sea was, with many ships at the time being wrecked.

It has recently been criticised by some for its work in rescuing migrants from the English Channel, with former UKIP leader Nigel Farage branding it a ‘migrant taxi service.’

His comments inspired a mocking fundraiser which promises to buy the RNLI a new hovercraft which it will name ‘The Flying Farage.’

The tongue-in-cheek GoFundMe page has raised more than £119,000 since being set up on Saturday, July 31 – with proceeds to go to the charity.

Saving lives at sea for almost 200 years: How the RNLI was founded in 1824 to provide UK and Ireland’s first 24/7 search and rescue service 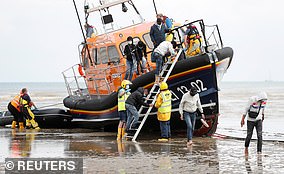 The RNLI has helped save over 143,000 lives since 1824 (Pictured: Recent mission saving migrants in the English Channel)

The RNLI was founded as the Royal National Institution for the Preservation of Lives and Property from Shipwreck in 1824 under the patronage of King George IV.

Thirty years later in 1854, it changed its name to the Royal National Lifeboat Institution – the RNLI – as it is known today, and was granted a Royal Charter in 1860.

Its founder Sir William Hillary wanted to provide a 24/7 search and rescue lifeboat service run, where possible, by volunteers and funded by voluntary donations.

Being aware of the treacherous nature of the Irish Sea, with many ships being wrecked around the Manx coast, he drew up plans for a national lifeboat service manned by trained crews.

Although the service was to be a national service to protect the coasts of the UK and Ireland, Hillary’s vision was to ‘extend its beneficial effects to the most distant shores, and to generations yet unborn.’

The RNLI says it is a charity ‘founded upon and driven by our values of selflessness, courage, dependability and trustworthiness, with volunteers at our heart.’

Volunteers make up 95% of the organisation, supported by expert staff, all ‘working together to help communities at home and abroad save lives.’

The charity is described as a ‘world-leading modern emergency service’, and is separate from the coastguard and independent from government.

In addition to its 24/7 search and rescue lifeboat service, it also operates a seasonal lifeguard service.

Every year, its volunteer lifeboat crews and lifeguards help and rescue thousands of people and have saved over 143,000 lives since 1824.

It also carries out youth education and water safety work.