The authors of a study based on an enormous randomised research project in Bangladesh say their results offer the best evidence yet that widespread wearing of surgical masks can limit the spread of the coronavirus in communities.

The preprint paper, which tracked more than 340,000 adults across 600 villages in rural Bangladesh, is by far the largest randomised study on the effectiveness of masks at limiting the spread of coronavirus infections. 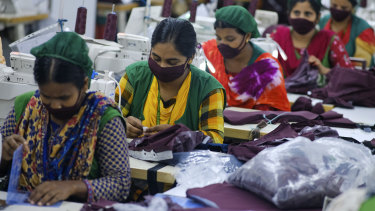 Its authors say this provides conclusive, real-world evidence for what laboratory work and other research already strongly suggest: mask-wearing can have a significant impact on limiting the spread of symptomatic COVID-19, the disease caused by the virus.

“I think this should basically end any scientific debate about whether masks can be effective in combating COVID at the population level,” Jason Abaluck, an economist at Yale who helped lead the study, said in an interview, calling it “a nail in the coffin” of the arguments against masks.

The researchers estimate that among a group of Bangladeshi adults in the study who were encouraged to wear masks, mask-wearing increased by 28.8 per cent after the intervention. When tracked, this group saw a 9.3 per cent reduction in symptomatic COVID-19 seroprevalence, meaning the virus was confirmed by bloodwork, as well as a further 11.9 per cent reduction in COVID-19 symptoms. 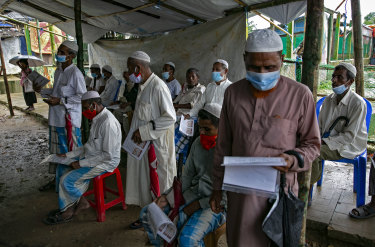 Refugees wait to be vaccinated in a Rohingya refugee camp in Cox’s Bazar, Bangladesh. Credit:Getty

The study’s authors – led by principal investigators Abaluck, Laura Kwong, Steve Luby, Ahmed Mushfiq Mobarak and Ashley Styczynski – a globe-spanning team that includes researchers from Yale, Stanford and the Bangladeshi nonprofit GreenVoice, emphasised that this did not mean masks were only 9.3 per cent effective.

“I think a big error would be to read this study and to say, ‘Oh, masks can only prevent 10 per cent of symptomatic infections,’” Abaluck said. The number would probably be several times higher if masking were universal, he said.

The study is under peer review with the journal Science. The authors granted journalists an early look at the results because of their potential importance in global public health debates.

Independent experts who were asked to look at the research praised its scale; some suggested that it might be the most convincing argument yet for mask-wearing.

“This is an incredibly challenging but important study to pull off,” said Megan Ranney, an emergency medicine physician and professor at Brown University who was not involved with this research. “Anti-mask people keep saying, ‘Where’s the randomised controlled trial?’ Well, here you go.”

“It’s not just modelling or looking back at studies,” said Lawrence Gostin, faculty director of the O’Neill Institute for National and Global Health Law at Georgetown University, who also was not involved. “This is the gold standard of scientific knowledge.”

The research is part of an ongoing project by Abaluck and his co-authors that looks not only at the efficacy of masking, but also public health methods for encouraging mask adoption among communities.

The team chose Bangladesh because co-author and Yale economist Mobarak was from the country and had worked there before, and because of increased options for funding.

The sheer scale of the project, which began in November and concluded in April 2021, is notable. About 178,000 Bangladeshi villagers were in an intervention group and encouraged to use masks. An additional 163,000 were in a control group, where no interventions were made. 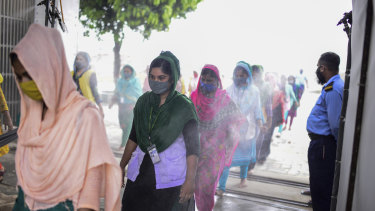 Masked garment workers walk through a disinfection at a factory in Savar, Bangladesh.Credit:AP

The project assessed the levels of mask-wearing and physical distancing through direct observations from plain-clothed staff in the community at mosques, markets and other gathering places.

“This is a project that cannot be done by a handful of people,” Abaluck said. “This is why there are hundreds of people involved in this project. That’s why the paper has … I don’t even know how many co-authors it has. Dozens of co-authors.”

Mask-wearing had been mandated in Bangladesh since March 2020, though adoption remained limited. The researchers found that they were able to increase mask-wearing in the intervention group from 13 per cent to 42 per cent – an increase of 28.8 percentage points. The effect was observed and found to be consistent over 10 weeks and persisted after the interventions ended.

The group credited a “cocktail” of four interventions that helped substantially increase mask usage in the community: providing no-cost masks delivered door to door; offering information about the benefits of masks; reinforcement of mask-wearing; and endorsement of masks by trusted local leaders.

“It is a precise combination of things and a set of tasks that need to be done in an overlapping, integrated way,” Mobarak told Yale Insights in May.

When those behavioral findings were released earlier this year, they received a positive response from experts. But the findings about the effectiveness of masks may well have a far wider impact.

“I see no reason why the interaction between the mask and the virus will behave any differently in rural Bangladesh or rural Kansas or urban New York or San Francisco,” Gostin said. “The biology is the same.”

Gostin said the research also pushed back on the “pernicious” idea that masks were only for individual protection. “(Masking is) a population-based blanket that we have to get widespread adoption of,” he said.

The study does not quite claim to be the final word on masks. The authors found that while cloth masks clearly reduced symptoms, they “cannot reject” the idea that unlike surgical masks, they may have only a small effect on symptomatic coronavirus infections, and possibly none at all.

Abaluck emphasised, however, that research did not produce evidence that cloth masks are ineffective.

The results “don’t necessarily show that surgical masks are much, much better than cloth masks, but we find much clearer evidence of the effectiveness in surgical masks,” he said.

In this research, “people were given masks and then told they were expected to wear them,” Ranney said. Something similar almost transpired in the United States. In April 2020, during the Trump administration, the Postal Service made plans to send five masks to every American household. But that strategy was abandoned.

“One of the things I wonder … if we had all been sent masks the same way” as participants in this study were, Ranney said, “would we have decreased the death toll from COVID?”