Washington: US Vice-President Mike Pence's speech to the Republican National Convention showcased the Trump administration's audacious re-election strategy: downplay the coronavirus as much as much as possible while using the chaos and violence in American cities to disqualify Joe Biden.

For viewers wanting an escape from the grind of the pandemic, the Republican convention has provided welcome relief. As the event has gone on over three nights, the virus has gotten less and less airtime – recognising the fact most Americans think Donald Trump has handled the issue poorly and are unlikely to change their minds. 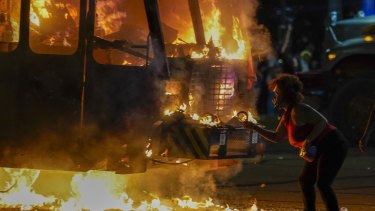 "The violence must stop, whether in Minneapolis, Portland, or Kenosha," Pence said.

"Joe Biden would double down on the very policies that are leading to violence in American cities. The hard truth is you will not be safe in Joe Biden’s America."

This argument has several obvious wrinkles. After all, Trump is the current president, not Biden: the violence in cities like Kenosha is happening on his watch. Rather than pointing to Trump's success at keeping Americans safe, Pence is arguing the disorder would be even worse under Biden.

There is also the factual problem that Biden is not a radical leftist who wants to defund the police. Indeed, at several points during the Republican convention speakers have criticised him for being too tough on crime throughout his career.

"We need to end the violence – and peacefully come together to demand justice," Biden said only hours before Pence's speech, making clear he condemns violence and looting.

Which is not to say the attacks won't be effective.

"The ongoing violence in American cities is an increasing vulnerability for Dems," Sarah Longwell, the founder of Republican Voters Against Trump, said on Twitter this week.

Longwell regularly conducts focus groups with swing female voters and said the issue was beginning to pop up regularly in these sessions.

"Americans were originally on the side of protesters," she wrote. "But as the unrest continues, attitudes are shifting. This is why Trump is leaning so hard into the LAW AND ORDER message."

It would be wise for Biden to be even more vocal about his views on law-and-order by delivering a substantial speech in which he rejects violence in the name of social justice. If he doesn't define himself on this issue, Republicans will happily do it for him – and it won't be flattering.

The most important news, analysis and insights delivered to your inbox at the start and end of each day. Sign up to The Sydney Morning Herald’s newsletter here, to The Age’s newsletter here and Brisbane Times‘ here.