Rome: A gold and crystal casing holding drops of the blood of Saint Pope John Paul II has been stolen from the cathedral of the central Italian city of Spoleto, its bishop said.

The casing, known as a reliquary, was snatched on Wednesday from an altar dedicated to the Polish pope, who died in 2005 after a 27-year reign. 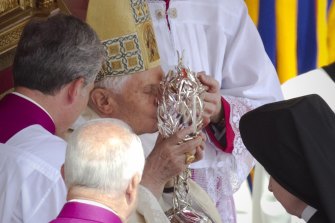 Pope Benedict XVI kisses the glass reliquary containing the blood of late Pope John Paul II, during the beatification ceremony at the Vatican in 2011. The object has been stolen from a church in Spoleto, Italy.Credit:AP

A sacristan who was closing the cathedral for the night discovered the theft of the reliquary, which encased a vial holding a few drops of blood.

Relics, which Catholics venerate as they pray to the saint, are usually pieces of a saint's body or clothing.

The relic was in the Spoleto cathedral temporarily and was due to be moved next month to a new church in the Umbria region named after the late pope. 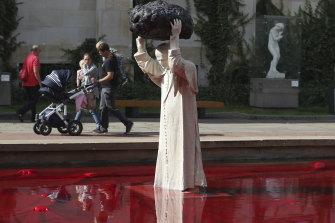 A new statue of the late pope St John Paul II throwing a stone at a “Poisoned Well” just hours before its official inauguration at the National Museum yard in Warsaw, Poland, on Thursday. The Jerzy Kalina sculpture is said to be a response to a controversial 1999 one by Italian Maurizio Cattelan in which the Polish-born pontiff was shown as being crushed by a similar stone.Credit:AP

"Give the reliquary back to the cathedral and the faithful," said Archbishop Renato Boccardo, who was a close aide to the late pope for years at the Vatican. "It would be the serious thing to do".

Boccardo said it was not clear if the reliquary had been stolen for ransom, which has happened in the past with other relics in Italy. Police were reviewing footage of security cameras inside and outside the cathedral.