Consumer inflation continues to rise at a torrid pace, significantly raising the odds the Federal Reserve will further supersize its interest rate hike at its next policy meeting and the economy will fall into recession sooner rather than later.

Consumer prices rose 9.1% in June from a year ago, well above economists’ mean forecast of 8.8% and at the fastest pace since November 1981. Even without the surge in energy and food prices, the so-called core rate rose 5.9%, also above estimates for 5.7%.

Price increases were broad-based, meaning there were few places consumers felt any relief from soaring prices and the Fed will be under immense pressure to take a giant step – like a 100-basis-point hike in its benchmark fed funds rate – to rein in prices, economists said. This could have wide, mostly negative, ramifications for the economy, financial markets and consumer finances.

Fed Chairman Jerome Powell said after last month’s policy meeting the Fed would likely be deciding between a 50- or another 75-basis-point rate increase at the July meeting, but after the consumer price data, economists have roundly taken a half point off the table.

Chicago Mercantile Exchange’s FedWatch tool shows more than an 80% chance for a full point increase at the Fed’s next policy meeting in two weeks, but most economists are holding on to their forecasts for a 75-basis-point increase. They admit though risks are for an upside move.

SUPER CYCLE: Federal Reserve increases key interest rate by 0.75% in biggest hike since 1994. What’s that mean for economy and you?

“The question that has to be asked, especially after the Fed’s surprise move from a well-telegraphed 50-basis point interest rate hike expected for the June Fed meeting, that switched dramatically to a 75-basis point move following last month’s higher than expected CPI report, is a 1% interest rate option going to be discussed at this month’s Fed meeting?” said Quincy Krosby, chief equity strategist at LPL Financial.

Raphael Bostic, Atlanta Fed president, reportedly told reporters in Florida on Wednesday “everything is in play,” including a one percentage point increase, when policymakers meet again. 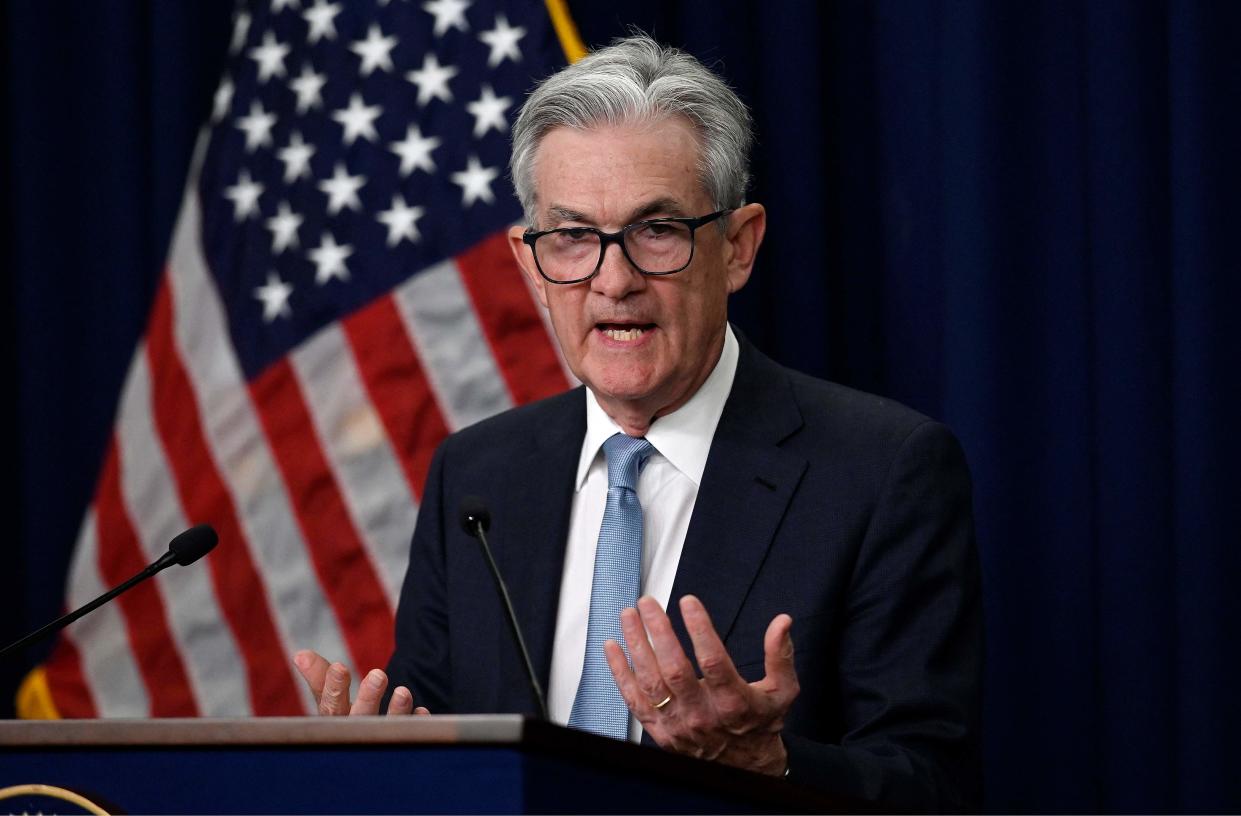 Economic recession sooner rather than later?

Because the Fed believed inflation was “transitory” for so long and allowed inflation to run so hot, it will now have “to move policy faster and deeper into restrictive territory,” James Knightley, ING chief international economist, said. “The Fed has accepted that weaker growth is the price we have to pay to get inflation under control. The recession threat is rising.”

SPENT: Inflation means people are spending less, which may be putting a recession on fast track

WARNING SIGN: What is an inverted yield curve? U.S. has seen one before every recession since 1955.

Bank of America Securities on Wednesday said it’s now forecasting a recession in the second part of this year due to a faster-than-expected slowdown in consumer spending and higher rates.

“With much of the recent rise in inflation coming from food and energy prices, commodities that face relatively inelastic demand in the short run, households may have less available for discretionary purchases,” it said in a report. “Financial conditions have also tightened, particularly in the mortgage market. The large run-up in home prices and higher mortgage rates have dented affordability, slowing home sales and housing starts.

What happens to the stock and bond markets?

Major U.S. stock indexes fell on the inflation figures and are likely to stay under pressure, analysts said.

“A big risk for stocks now is how much the inflationary trends hit results and outlooks this earnings season,” David Russell, TradeStation Group vice president of market intelligence, said. “Wall Street is already expecting the slowest profit growth since late 2020, so the mood could remain pretty grim with results due in the coming weeks.”

And even beyond that because inflation has shown no signs of having peaked despite much talk of it, some say. That’s because much of the increases are “sticky,” coming from so-called core items like rent, medical care and transportation services, and show no signs of abating, they said. Over the past three months, the three-month annualized rate of core inflation was 7.9%, suggesting core inflation may have even accelerated in recent months, Wells Fargo said.

“We likely won’t see the actual peak for months, if not until early next year,” Rusty Vanneman, chief investment strategist at Orion Advisor Solutions, wrote in a commentary. “Most significantly of all, given general investor sentiment and positioning for peak inflation sooner than later, it seems the “pain trade” (i.e, the market moving in the direction that causes the most pain to investors) is for lower stock and bond prices.”

What can consumers expect?

The Fed’s rate changes eventually ripple out and affect all other rates. So, with the Fed moving aggressively with rate hikes, consumers should expect interest rates on everything from mortgages and auto loans to credit cards and savings accounts to rise sharply.

For example, the average credit card interest rate climbed in July to 20.82%, the highest level since LendingTree started tracking this data in 2018 and isn’t likely to stop there.

CHARGE IT: To cope with record inflation, Americans have opened up a record number of credit cards

“The Fed is far from finished raising interest rates – and many banks haven’t even finished implementing the Fed’s most recent hike,” said Matt Schulz, LendingTree chief credit analyst. “So, there’s no question that the average credit card APR is only going to keep rising in the coming months. That’s bad news for folks with card debt.”

Low interest rates are also harder to find. Just 54, or about half the number in January, of roughly 200 cards LendingTree reviewed this month had a minimum APR of 15% or lower. That means consumers need to act quickly and start moving balances to lower-rate cards or calling their issuer to request a lower interest rate. About 70% of folks who asked for one in the past year got some sort of reduction, with the average cut at 7 percentage points, Schulz said.

Consumers should also look at a 0% balance transfer credit card or a low-interest personal loan, he said.

Medora Lee is a money, markets, and personal finance reporter at USA TODAY. You can reach her at [email protected] and subscribe to our free Daily Money newsletter for personal finance tips and business news every Monday through Friday morning.