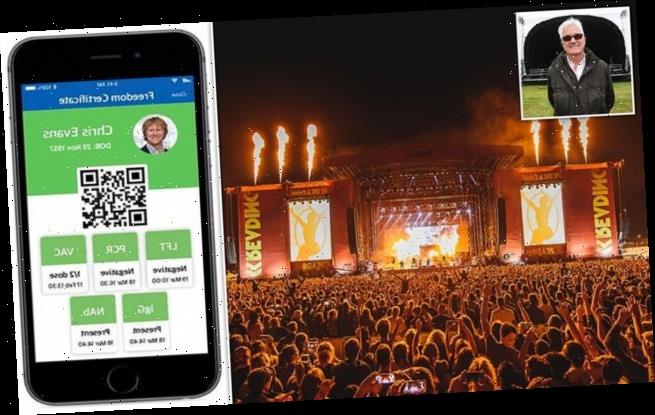 Music fans attending this year’s Reading and Leeds Festival will ‘almost certainly’ need a form of vaccine passport or show proof they do not have coronavirus, the organiser admitted today.

Festival Republic director Melvin Benn said there will be a dedicated Covid-19 medical director and team for the two-site event featuring Stormzy, Liam Gallagher and Queens of the Stone Age on August 27 to 29.

This comes as the organisers of BST Hyde Park announced this year’s event would not be taking place.

Mr Benn told how he was ‘taking the Prime Minister at his word’ that all legal restrictions on social contact would be removed by June 21 – and he was ‘certainly anticipating’ that the festival would go ahead as planned.

Festival Republic has said ticket holders for the event – which is already sold out – who have not received the vaccine are likely to need to have taken a coronavirus test at home before leaving for the events.

They would be sent a test before the festival, which must then be taken in front of a doctor on a screen less than 36 hours before they are due to leave. Attendees would then be sent a QR code for a health pass to grant entry.

The attendee will have to pre-book the virtual doctor’s appointment, which will take around three minutes, and the test is likely to cost up to £10 – although Festival Republic is still determining the final pricing. 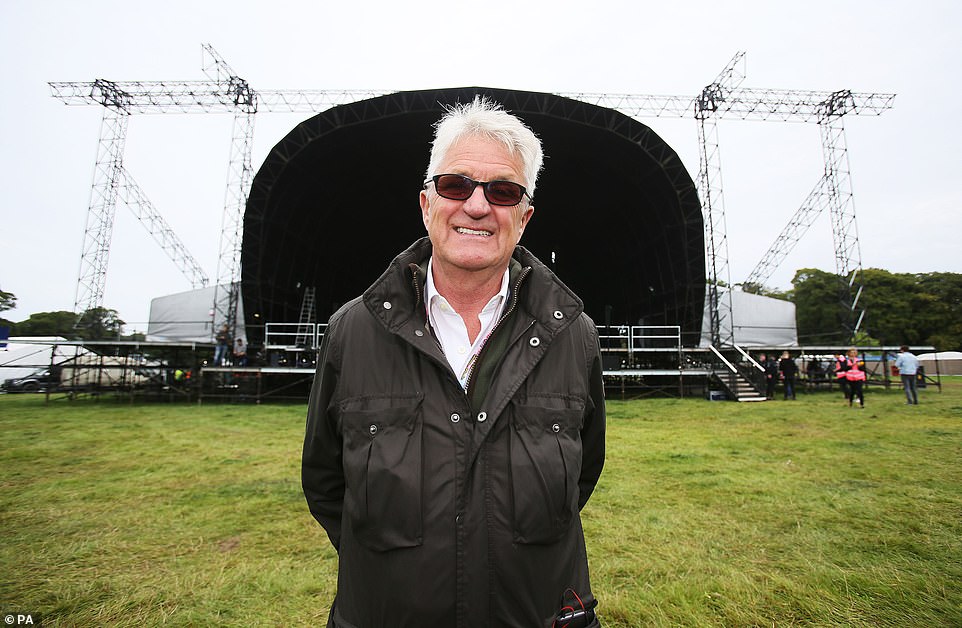 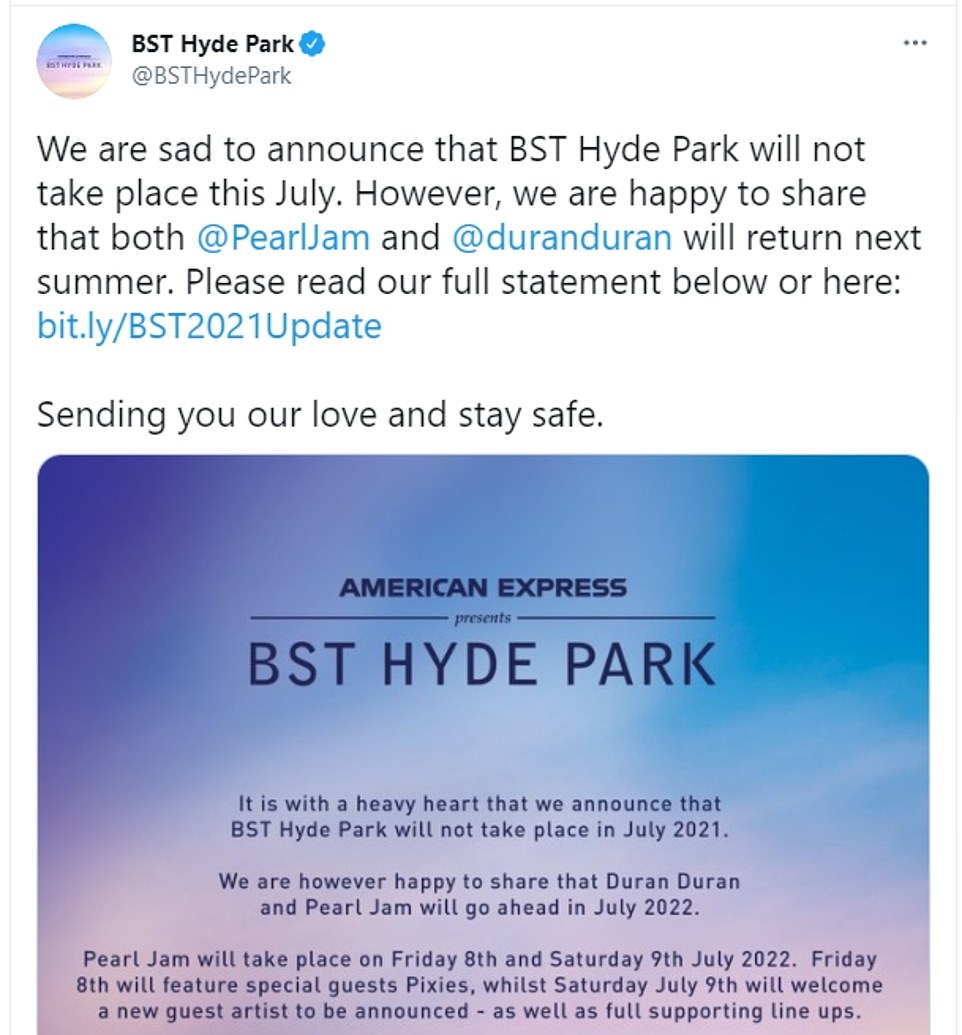 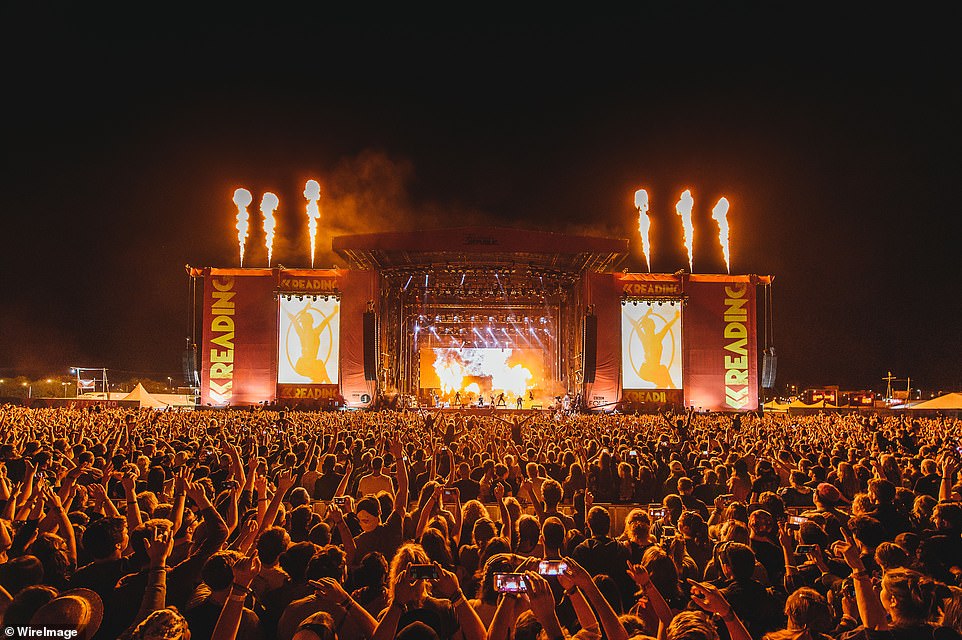 Reading Festival, pictured in 2016, is set to go ahead on the August bank holiday weekend if the roadmap goes to plan 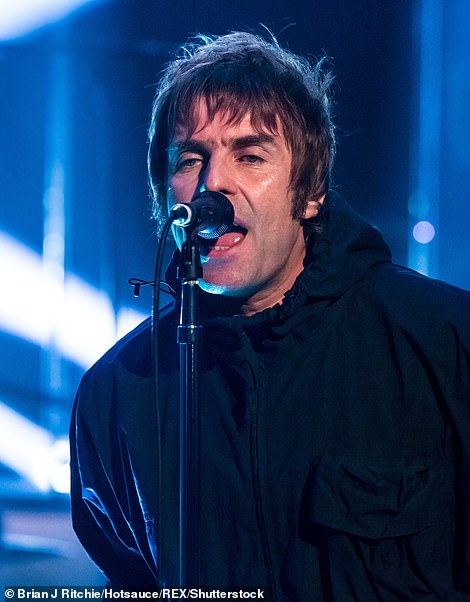 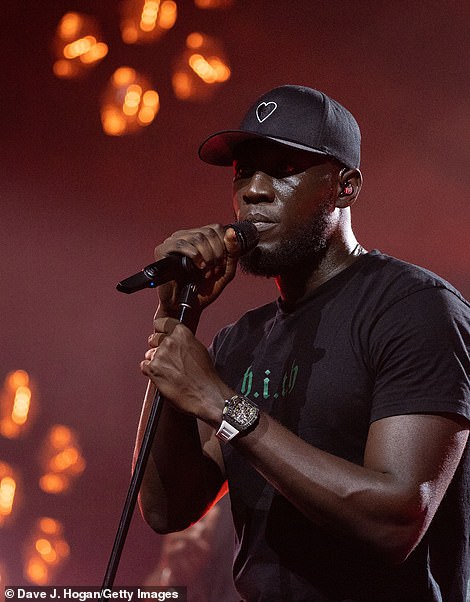 The event itself will feature increased hand sanitation points, teams of on-site medics, emergency testing facilities – and rules on wearing face coverings if the Government requires this in certain situations.

Mr Benn told BBC News that it was difficult to know what safety measures would be required after the rules cease, and that in ‘an ideal world’ people could go about ‘our daily business’ as though it was before the pandemic.

Reading could operate at 13 per cent of capacity while Leeds would be at 23 per cent if the festivals followed social distancing guidelines, a study found.

Geospatial analysis company Esri UK looked at how many people could hypothetically attend the festivals if they had to space out. It found 13,970 festival-goers could fit within Reading’s festival site compared to its 105,000 capacity, while at Leeds, 17,120 could attend instead of 75,000, or 23 per cent of the normal volume. 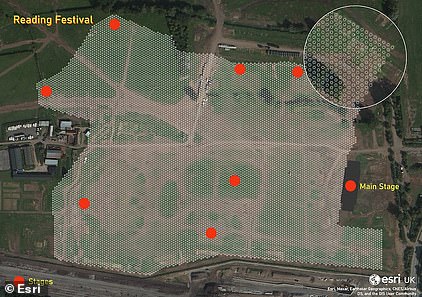 Reading could operate at 13 per cent of capacity – 13,970 instead of 105,000 – if all attendees following social distancing rules

The company also determined that if Glastonbury had gone ahead, only 5 per cent (4,967) of the Pyramid Stage’s estimated 100,000 capacity would have been possible under the same social distancing formula.

The method used placed a single person inside a two-metre diameter circle, following the usual two-metre social distancing guidelines. But this was with an additional two metres of space between each circle, allowing some space for people to move around, to represent a hypothetical estimation of festival capacity. 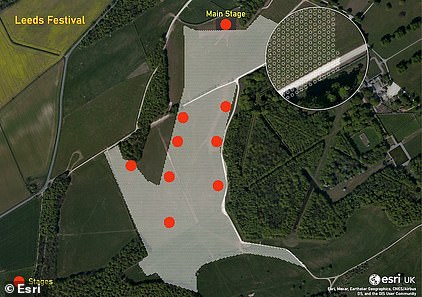 Sam Bark, cartographer at Esri UK, said: ‘We wanted to examine how many people could hypothetically fit within a festival site ahead of the summer festival season. Spatial analysis can help give event organisers an indication of capacity for any type of event, either outdoors or indoors.

‘Obviously, the figures come with some caveats, as most festival goers are in groups of more than one and people don’t remain stationary, but the criteria can be easily adjusted. For example, the size of bubbles can be increased, or additional space could be added between each bubble, which would reduce capacity further.’

He said: ‘I’m taking the prime minister at his word that from June the legal restrictions will be off and as he and the culture secretary said: ‘We are looking forward to a summer of fun’.

‘If it is cancelled everyone gets a refund – that’s pretty normal – but I’m certainly anticipating it going ahead.’

Meanwhile Ministers are considering allowing workplaces to introduce vaccine passports to allow the reopening of offices after the pandemic has passed.

Employers would be able to compel staff to prove they had been vaccinated or had a negative test before entering the building.

Experts say it could help to end more than a year of remote working for millions of employees. Companies which use such schemes could be able to pack more staff into the office.

Yesterday afternoon, MPs held an online meeting with Michael Gove, the minister in charge of a review into vaccine passports, to put their views to him.

The discussions come as business leaders urged the Government to provide clarity on whether workers will be allowed back into offices this summer.

Adam Marshall, director general of the British Chambers of Commerce, said: ‘Companies are concerned about the employment law consequences of these decisions around return to work, the concerns around potential for liability but, most of all, concerns about doing what is right for their people.’

Some bosses are urging the Government to allow them to use vaccine passports to facilitate a return to normal working practice in offices, The Financial Times reported.

A recent survey by the Chartered Management Institute found that more than half of managers wanted to make Covid-19 vaccinations mandatory for staff returning to work.

Boris Johnson had said last week that landlords could introduce the passports in pubs to allow social distancing rules to be relaxed.

Conservative backbenchers, publicans and some scientists have raised concerns over the possible introduction of coronavirus health certificates as England’s lockdown is eased.

Ministers are studying their potential use, which could see access to venues granted only if customers have been jabbed, received negative tests, or developed antibodies through past infection.

Culture Secretary Oliver Dowden argued on Sunday that vaccine passports will not be introduced on a ‘permanent basis’ but they could be a beneficial tool to restart safely in the short-term.

But, writing in the Telegraph, Mr Martin said ‘there is no justification for a passport system’.

The chairman of the pub chain said: ‘For many pubs, hanging on for dear life and devastated by G-force changes of direction, a complex and controversial passport scheme would be the last straw.

‘It would inevitably put pub staff in the frontline of a bitter civil liberties war, with some customers unwilling to be vaccinated or unable to have a jab for medical reasons.’

Mr Dowden, whose brief includes theatres, where certificates could be valuable in relaxing social distancing, had insisted ‘we need to look at all options’ for safely easing restrictions.

‘Of course we would never look to do this on a permanent basis, it’s just whether it might be a tool in the short term,’ he told The Andrew Marr Show on BBC One.

Welsh First Minister Mark Drakeford said he is prepared to consider their use provided they are ‘fair and reliable’. 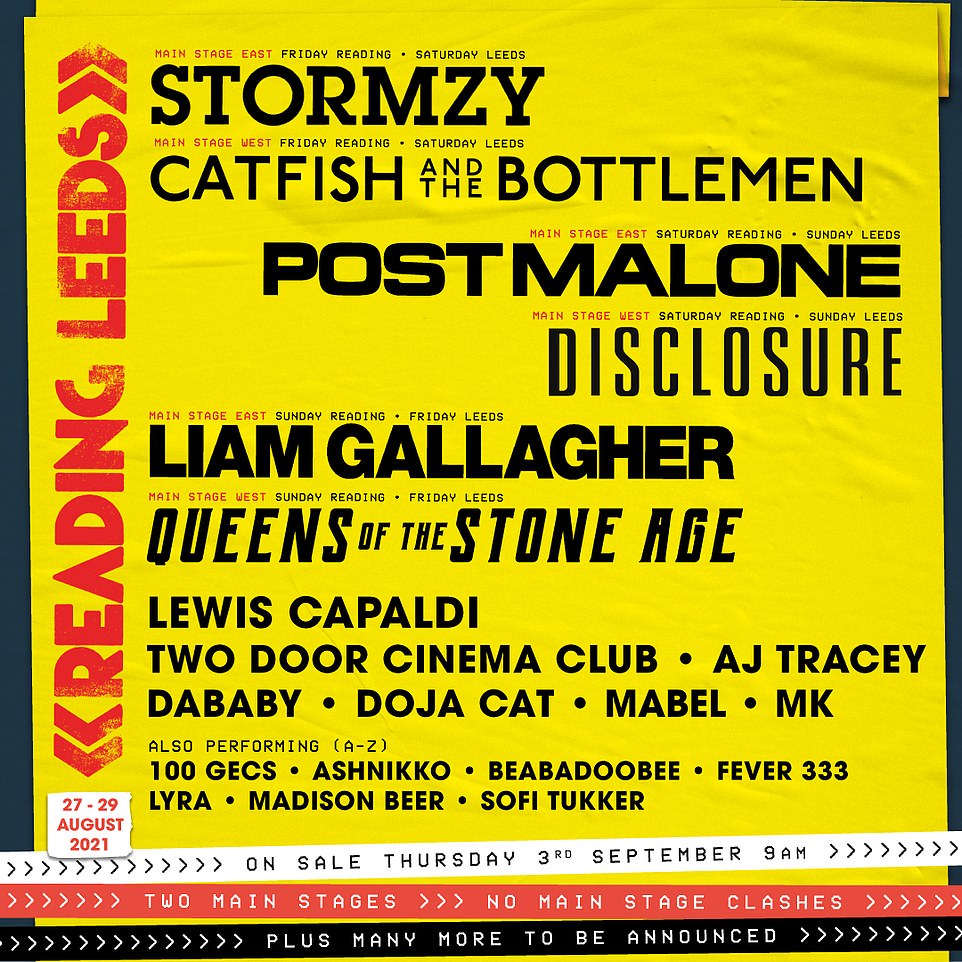 ‘I think there are definitely prizes to be won through domestic vaccine certification, but there are very big practical and ethical challenges to face as well,’ he told Marr. 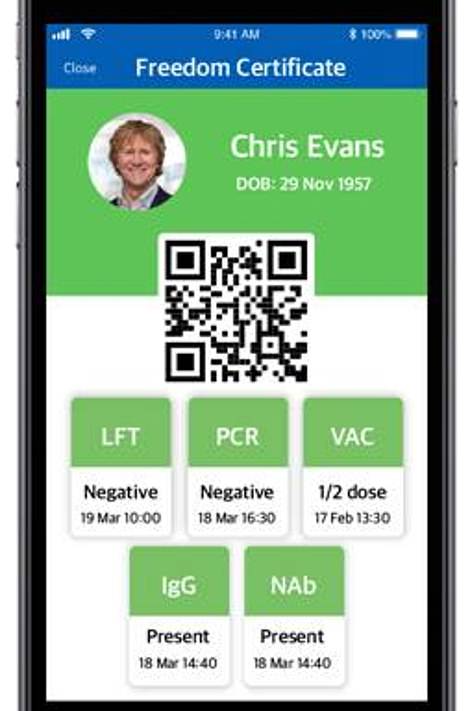 How a coronavirus vaccine passport for Britons could look

Professor Mark Woolhouse, a member of the Government’s Scientific Pandemic Insights Group on Behaviours (Spi-B), said the use of passports ‘certainly’ had to be considered to make post-lockdown life safe.

‘For those activities that it is difficult to make completely safe – I am thinking things like nightclubs, large concerts, mass gatherings – that’s where passports come in, whether it is vaccine passports, test negative passports or even immunity passports,’ he told Marr.

However, his Spi-B colleague Professor Stephen Reicher said on Saturday that certificates could compound hesitancy in those already sceptical of vaccines and could therefore be counterproductive by causing lower uptake.

He also warned they could lead to ‘social division’.

Pub landlords this week rejected Boris Johnson’s suggestion that it could be up to them to decide whether to screen customers’ certificates on entry.

The Prime Minister acknowledged the ‘moral complexities’ around a domestic vaccine passport scheme, on which the Government will set out more details in early April.

A Whitehall source said one possibility being considered is that landlords may be able to scrap social distancing if they check Covid health certificates on entry.

The move would allow them to operate at much higher capacity and could be a strong incentive for them to participate in the scheme.