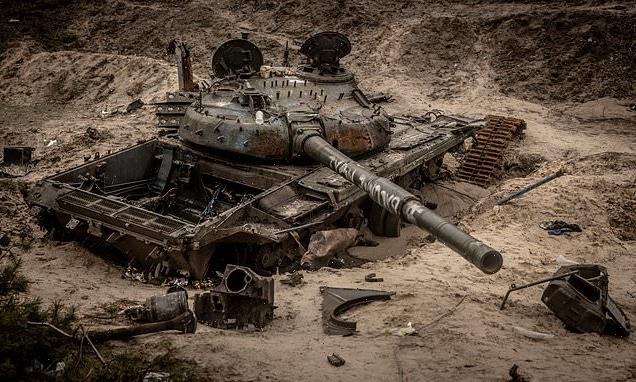 One of Vladimir Putin’s tank commanders deliberately blew up a Russian checkpoint in Ukraine following an argument between units in the latest example of in-fighting that has plagued the President’s war.

The tank commander became so angry after a battlefield argument that he drove his T-90 tank at a group of Russian soldiers, fired at their checkpoint and blew it up.

‘Those types of things happen there,’ Fidar Khubaev, a Russian drone operator who witnessed the attack and fled Russia in Autumn, told the New York Times.

The incident, which took place in the Zaporizhzhia region during the summer, points to how splintered Russian units have fought openly with each other. 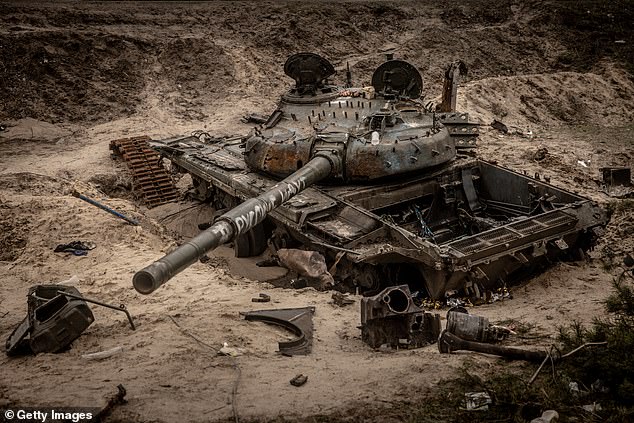 A destroyed Russian tank is seen by the side of the road on December 15, 2022 in Kupiansk, Ukraine

Russian troops have now been driven back in Ukraine’s north, north-east and south – prompting criticism and in-fighting within the ranks of Putin’s military.

After Russian troops were encircled by Ukrainian forces and forced to withdraw from the eastern Ukrainian city of Lyman in October, the leader of Chechnya, Ramzan Kadyrov, blamed the retreat on Russian Major-General Alexander Lapin.

Kadyrov said that Lapin should be stripped of his medals and sent to the front line with a gun to wash away his shame with blood.

Yevgeny Prigozhin, founder of the Wagner private military group, echoed Kadyrov’s sentiment, saying at the time: ‘Send all these pieces of garbage barefoot with machine guns straight to the front.’ 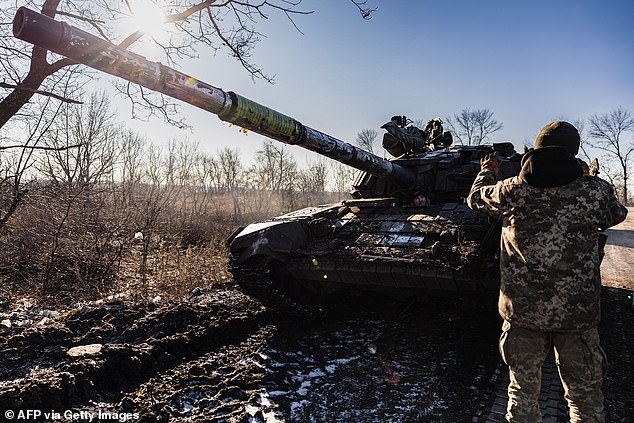 Soldiers from the Ukrainian armed forces’ 10th brigade move a T-72 tank forward as they attempt to repair a track, in the Donetsk region, eastern Ukraine on Monday

Marines from the 155th Naval Infantry brigade wrote a letter claiming they had lost 300 servicemen during a four-day assault in the eastern Ukrainian town of Pavlivka thanks to the catastrophic planning of Generals Rustam Muradov and Zurab Akhmedov.

The marines claimed Russian commanders were ‘hiding’ the mayhem in the Donetsk region and ‘playing down the number of losses for fear of being held responsible’.

This public anger has added to a complete sense of disarray within Russian ranks – but Putin and his commanders are trying to pretend everything is working well, General Budanov, the Ukrainian military intelligence chief, said.

‘They are still trying to maintain the illusion that everything is going well,’ he said.

But Putin has made sweeping changes to his military leadership in the past few months as Ukrainian forces have claimed thousands of square kilometres in the northeast, east and south from Russian occupation. 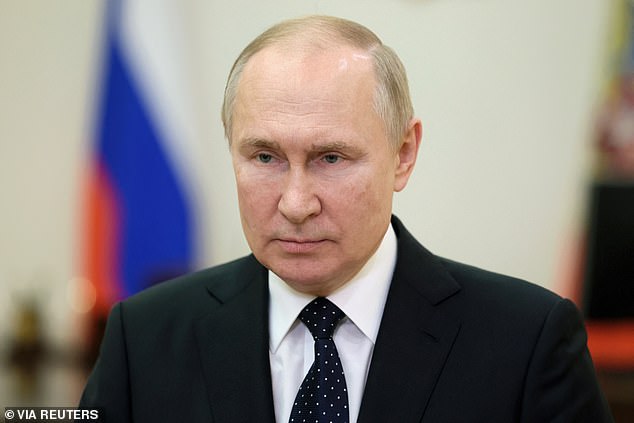 Putin has made sweeping changes to his military leadership in the past few months as Ukrainian forces have claimed thousands of square kilometres in the northeast, east and south from Russian occupation

On October 8 it named Air Force General Sergei Surovikin as the overall commander of Russian forces fighting in Ukraine, shortly after the reported sacking of the commanders of the Eastern and Western military districts.

Meanwhile, Putin today said the situation in four territories that Russia moved to annex in September is ‘extremely difficult’ in a rare admission that the war in Ukraine is not going smoothly.

‘The situation in the Donetsk and Lugansk People’s Republics, in the Kherson and Zaporizhzhia regions is extremely difficult,’ Putin told the Russian security services on their professional holiday.

He ordered FSB to ensure the ‘safety’ of people living there.

‘It is necessary to strictly suppress the actions of foreign intelligence services, to quickly identify traitors, spies and saboteurs,’ he added.

The FSB, the main successor to the Soviet-era KGB, has already been operating in Russia as an expansive surveillance and censorship apparatus and Moscow’s invasion in Ukraine has involved a large swathe of the security services.

Putin in September announced the Russian annexation of four territories in the east and south of Ukraine after Moscow proxies held referendums there, denounced as a sham by Kyiv and the West.

But Russian troops at no point controlled all of any of these regions, and last month were forced out from the regional capital of the southern Kherson region after a months-long Ukraine counteroffensive.

Following setbacks on the ground, Moscow switched strategies and stepped up its aerial campaign, targeting Ukraine’s military and energy facilities.