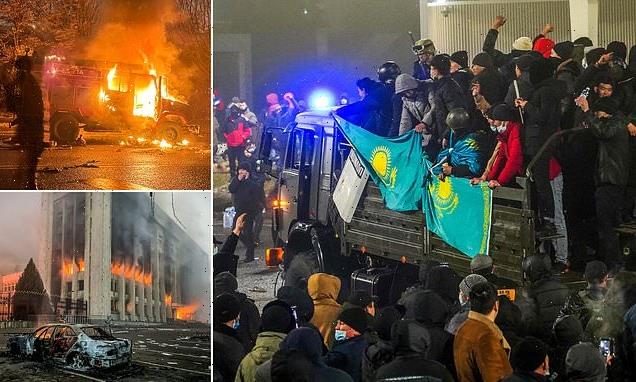 Protesters in Kazakhstan’s largest city stormed the presidential residence and the mayor’s office and set both on fire as demonstrations escalated sharply.

Police reportedly fired on some protesters at the residence in Almaty before fleeing. They have clashed repeatedly with demonstrators in recent days, deploying water cannons in the freezing weather, and firing tear gas and concussion grenades.

The Kazakh interior ministry said eight police officers and national guard members were killed in the unrest and more than 300 were injured.

No figures on civilian casualties were released. 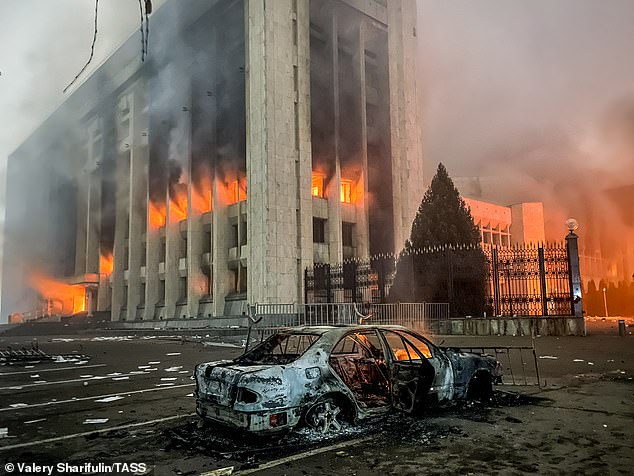 A burnt car is seen by the mayors office on fire. Protests are spreading across Kazakhstan over the rising fuel prices; protesters broke into the Almaty mayors office and set it on fire 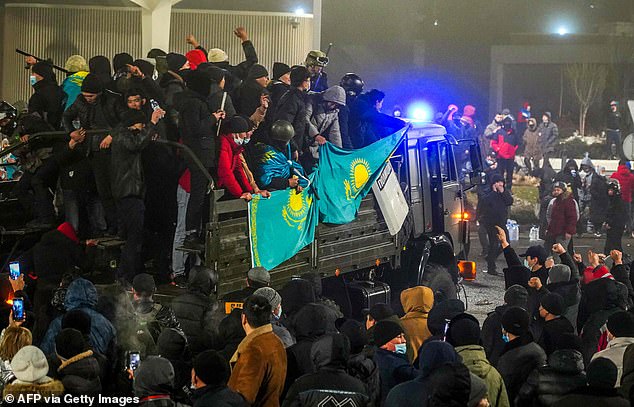 Kazakhstan on January 5, 2022 declared a nationwide state of emergency after protests over a fuel price hike erupted into clashes and saw demonstrators storm government buildings 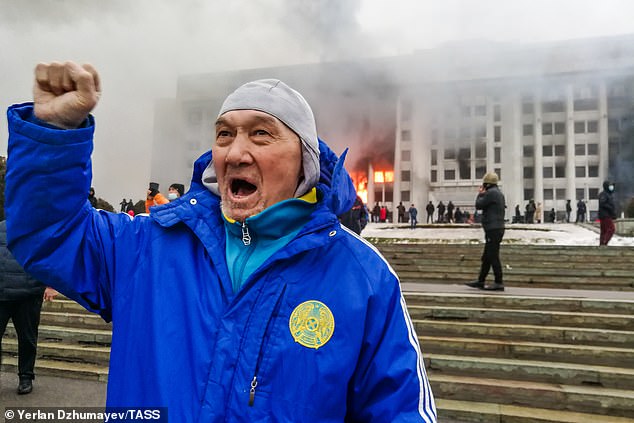 A man rallies outside the burning mayors office. Protests are spreading across Kazakhstan over the rising fuel prices; protesters broke into the Almaty mayors office and set it on fire 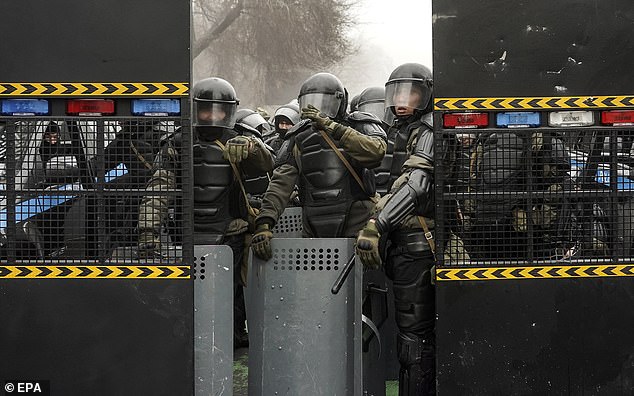 Riot police officers block a street during the protests in Almaty, Kazakhstan, 05/01/2022

President Kassym-Jomart Tokayev vowed to take harsh measures to quell the unrest and declared a two-week state of emergency for the whole country, expanding one that had been announced for both the capital of Nur-Sultan and the largest city of Almaty.

Mr Tokayev appealed to a Russian-led security bloc to help stem the violence and the Collective Security Treaty Organisation responded by sending troops over the borders last night.

‘Today I appealed to the heads of CSTO states to assist Kazakhstan in overcoming this terrorist threat,’ Mr Tokayev said on state television as he blamed ‘terrorist bands’. ‘In fact, this is no longer a threat,’ he added. ‘It is undermining the integrity of the state.’

Moscow leads the CSTO security alliance, which includes five other former Soviet states. The Kazakh government resigned in response to the unrest.

Although the protests began over a near-doubling of prices for a type of liquefied petroleum gas that is widely used as vehicle fuel, their size and rapid spread suggested they reflect wider discontent in the country, which has been under the rule of the same party since gaining independence from the Soviet Union in 1991.

Kazakhstan, the ninth-largest country in the world, borders Russia to the north and China to the east and has extensive oil reserves that make it strategically and economically important.

Despite those reserves and mineral wealth, discontent over poor living conditions is strong in some parts of the country. Many Kazakhs also chafe at the dominance of the ruling party, which holds more than 80 per cent of the seats in parliament.