This is the hilarious moment a cat makes a gagging face after smelling its least favourite food.

Belyash the cat, from Moscow, cannot stand sour cream, according to its owners.

In a video showing the fluffy white moggy sitting on a patterned blanket, its owner places an opened pot in front of it.

The cat appears to have a concerned expression as the pot is brought towards it – even looking away.

But its natural curiosity means it can’t resist leaning in to give the substance a sniff. 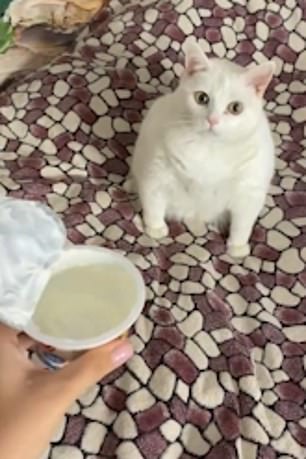 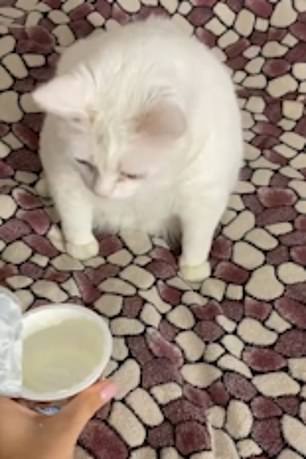 Almost immediately after smelling the sour cream, the cat retches. Its eyes bulge out of their sockets and its tongue comes out of its mouth.

The six-second video, filmed at the cat’s home in Russia on Saturday, November 14, was captioned: ‘The cat ‘Belyash’ does not like sour cream.’

Cats are lactose intolerant and can only stand small amounts of dairy products, including sour cream and milk, despite cartoons often depicting cats being fed a bowl of milk.

If cats consume too much dairy it can cause sickness and diarrhoea but some cats actually love sour cream, and enjoy it in small quantities as a treat. 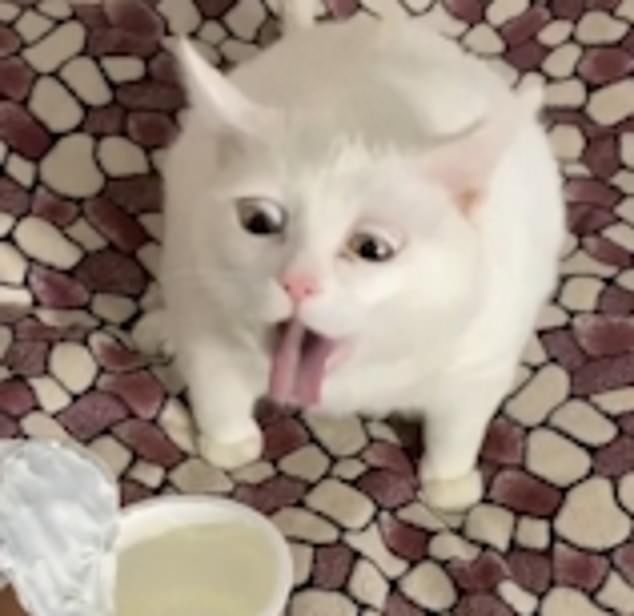 Belyash the cat (pictured retching after smelling sour cream), from Moscow in Russia, cannot stand sour cream, according to its owners

What human foods are actually bad for cats to eat, causing sickness and a number of other health problems?

1) Milk, cheese and other dairy products

For kittens that are too young to eat solid foods and don’t have a source of their mother’s milk, veterinarians recommend feeding kitten-specific milk formulas, which provide essential nutrients. Cow milk is not a substitute for their mother’s milk.

It contains two ingredients that are toxic to cats: theobromine and caffeine. Both milk chocolate and dark chocolate can cause vomiting, diarrhoea, increased body temperature and rapid breathing or heart rate and seizures

In cases of high exposure to theobromine and caffeine, cats can also suffer from heart failure, weakness or a coma.

These raw foods may contain dangerous E. coli and salmonella bacteria, which can cause diarrhoea, vomiting and lethargy in cats. Exposing your cat to these pathogens can even prove fatal.

A steady diet of dog food instead of cat food can cause malnutrition. Cats need vitamin A, taurine and arachidonic acid – all essential nutrients not provided in dog food.

Cats can safely eat bread on occasion, but note that bread contains no nutritional value for them, so it should not replace their normal cat food diet.

Yeast and raw bread dough are not safe for cats – after it’s eaten, the dough can rise in a cat’s stomach and cause dangerous digestive issues.

This fish can serve as an occasional treat for your cat, but you should avoid feeding them a tuna-heavy diet.

Onions, garlic and other members of the allium family like chives and leeks can cause anaemia in cats. They can damage a cat’s red blood cells, and can also cause nausea, abdominal pain, vomiting and diarrhoea.