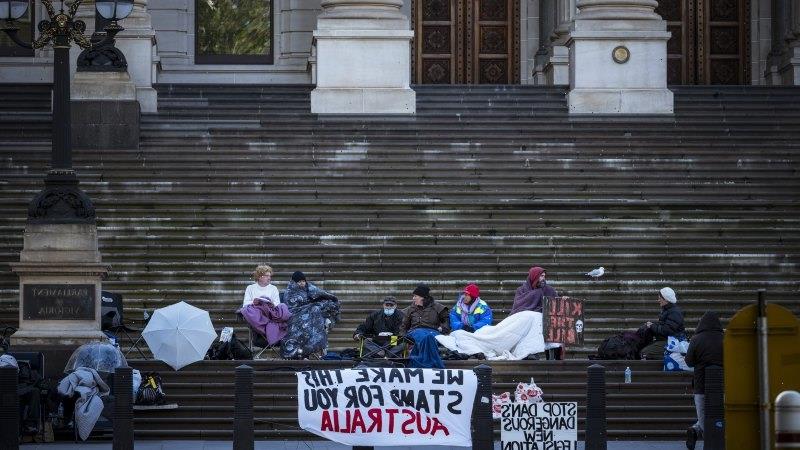 Demonstrators have returned to the steps of Parliament House to continue their protest against the Victorian government’s proposed pandemic laws.

By midday on Monday about 60 protesters had gathered, chanting, listening to music and displaying signs railing against vaccines, mandates, Premier Daniel Andrews and the pandemic response. A handful slept through the night, as the temperature dropped to 8.7 degrees on the steps.

The protest, which organisers have promised would run 24 hours a day, seven days a week, was attended by old and young people, with a few parents bringing children along.

A handful of protesters camped out overnight on the steps of Parliament House.Credit:Chris Hopkins

The proposed legislation has been heavily criticised for being too heavy-handed in giving the Victorian premier and health minister of the day the authority to declare a pandemic and make public health orders, and would mean non-compliant Victorians face the harshest fines in the country.

Mother of two Abigail, who did not want to give her last name, said her concern extends beyond the vaccine mandates to the powers that will be handed over to the government should the bill pass through Parliament.

“The bill is really important, but at the end of the day, it’s just about having choice and being pro-choice. I wouldn’t label ourselves as anti-vaccine … my kids are vaccinated with everything else,” she said.

“We feel like those choices are being taken away in this country.”

A primary school teacher, Abigail says she’s been stood down from duties for refusing to get a vaccine, and brought her two young daughters to the CBD on Monday.

Demonstrators huddled underneath umbrellas just before midday to avoid a small amount of rain. One man stood at the front playing music and people quietly chatted between interruptions from cars driving by honking in support.

People hit drums and chanted as pedestrians watched from the other side of the road.

Dandenong grandmother Jay said she hadn’t protested before the emergence of this bill.

“We do not agree to this bill, any part of it,” she said.

“That’s what this legislation is predicated on,” he told ABC radio Melbourne.

“We’ve looked around the country and, indeed, New Zealand, and based on all the best models that we’ve seen, what this legislation does is makes the public health advice the heart of the decision – it will be published, it will be tabled in Parliament.”

Monday’s demonstrations follow a weekend that saw thousands flood Melbourne’s CBD on Saturday in peaceful protest, voicing opposition to the controversial laws. Though police did not provide an estimate of the size of the crowd, they appear to have been increasing in size in recent weeks.

The Public Health and Wellbeing Amendment (pandemic management) Bill 2021 passed the lower house last month, and the government is now hoping it will pass the upper house next week with the support of three crossbenchers.

The crowd is expected to keep growing before speeches this afternoon.