London: It was the old Prince Harry that we all know and love, game for a laugh and happy to send himself up.

Larking about with chat show host James Corden on an open-top bus tour through Los Angeles, there is no denying the Duke of Sussex’s first interview since leaving the royal family was 17 minutes of television gold. 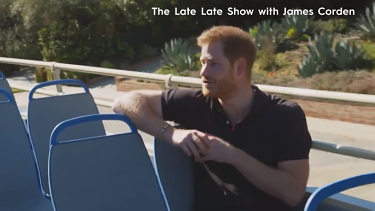 Prince Harry’s interview with James Corden, host of the “Late Late Show” in the United States.

From the revelation that the Queen gave her great-grandson Archie a waffle-maker for Christmas, to the sixth-in-line to the throne rapping the Fresh Prince of Bel-Air theme tune, it was pitched as light entertainment.

But it soon became apparent that the carefully choreographed recording had a much heavier agenda than casual chit-chat over tea and scones.

Borrowing boldly from the Hollywood playbook of mixing business with pleasure, the megabucks deal the Sussexes signed with Netflix in September came along for the ride as Harry extolled the virtues of The Crown.

He said it was “loosely based on the truth”.

“It gives you a rough idea about what that lifestyle, what the pressures of putting duty and service above family and everything else, what can come from that.

“I’m way more comfortable with The Crown than I am seeing the stories written about my family or my wife, or myself, because … that is obviously fiction, take it how you will, but this is being reported on as facts because you’re supposedly news.”

Most of his relatives have been so offended by The Crown’s depiction of the royals as gin-swilling sociopaths that they have refused to watch it, but not, seemingly, the Queen’s grandson.

I’m not quite sure Prince Charles would agree, but then again, he’s not the one paying the bills any more. 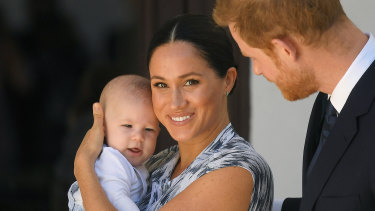 Megan, Duchess of Sussex and Prince Harry, Duke of Sussex, with their son Archie in South Africa in 2019.Credit:Getty Images

Selflessly taking one for the team, Meghan then popped up on FaceTime – a seemingly spontaneous moment that just so happened to coincide with her latest blow dry. Even her husband appeared astonished when Corden had the audacity to refer to the former Suits star as “love” in a slightly cringy moment that only served to remind UK viewers that both men will always carry the “Brits abroad” badge in a place like California.

The former army captain appeared most at home on the assault course with Corden, enthusiastically encouraging The Late Late Show presenter over various obstacles. Whether it was supposed to be a metaphor for the hurdles Harry has had to jump to “find freedom”, we’ll never know.

But what is clear is that the tell-all will now set the tone for the Sussexes’ future forays into the spotlight as they attempt to rewrite the history of their departure from the ‘Firm’ through the medium of philanthropy and self-promotion.

By conveniently making no mention of their desire to “work to become financially independent”, as stated in their original “Megxit” bombshell of January 8 last year, Harry made the blame-the-British-press strategy plain as he complained of a “toxic” environment. It may well prove to be a winning formula in America, where the rich and famous can control a media that largely worships at the altar of celebrity.

“We all know what the British press could be like, and it was destroying my mental health, I was like this is toxic. So I did what any husband and what any father would do is like, ‘I need to get my family out of here.’ ”

Before they moved to California, the couple had complained about the British tabloids’ treatment of Meghan, whose father is white and mother is African American, some of which they said amounted to bullying or racism.

Yet while many will rightly feel sympathetic towards Harry for the mental anguish he has suffered, they are also likely to have more reliable memories than his new-found and famously fickle US audience. They will remember, for instance, the miles of column inches that were written in praise of the 36-year-old’s two tours of Afghanistan and the hugely positive coverage of his charitable work.

They also won’t have forgotten the warm welcome Meghan was given when she first arrived in Britain and how thousands lined the streets of Windsor to applaud the newly-weds’ carriage procession in May 2018. They are also unlikely to lose sight of the fact that beyond all the PR puffery and benign blather with close friends masquerading as grand inquisitors, there are two sides to every story.

By only seeking favourable coverage, while their royal relatives take the rough with the smooth, the Sussexes risk accusations of having ideas above their station, exemplified by the rather negative reaction to their recent suggestion that “service is universal”.

The timing will also have struck some as a little off, coinciding with the 94-year-old monarch making a historic intervention in the coronavirus vaccination drive, while her 99-year-old husband Philip remains in King Edward VII’s Hospital.

Part joker, part deep-thinker, and undoubtedly a sensitive soul, Harry has always been a complex character, which is what has endeared him to the public over the years.

He became one of the most popular members of the royal family precisely because he used to take the work seriously, but not himself.

While we were treated to a shimmer of that familiar sparkle yesterday, the man on the Clapham omnibus could have been forgiven for sensing the slightest hint of regret.