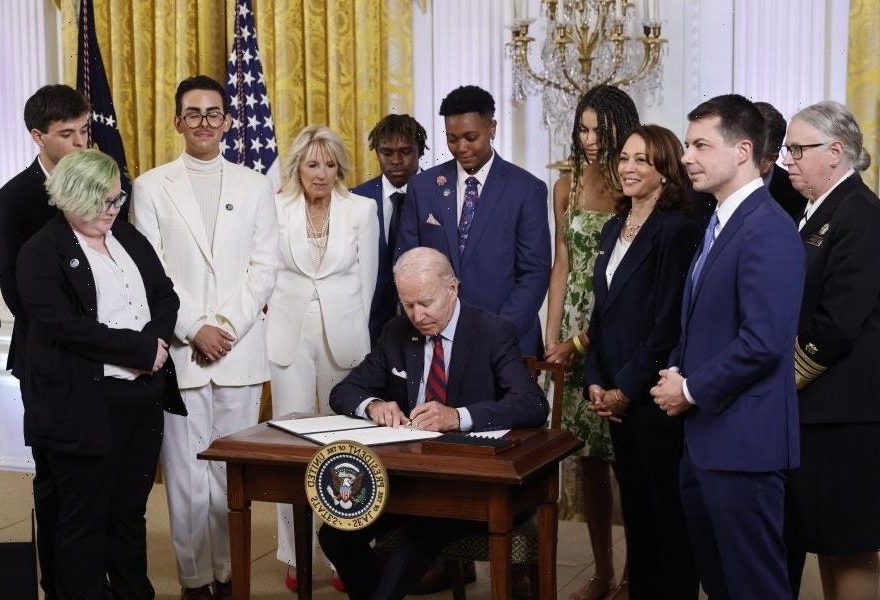 President Joe Biden signed an executive order on Wednesday that aims to combat discriminatory laws and practices against the LGBTQ+ community.

According to CBS News, the executive order will direct the Department of Health and Human Services to work with states to expand access to gender-affirming care and youth mental health counseling, as well as advance LGBTQ-inclusive learning environments at schools. It will also stop federally-funded programs from offering conversion therapy, a widely discredited and condemned practice that aims to change a person’s sexual orientation or gender identity.

“All of you in this room know better than anyone that these attacks are real and consequential for families,” the president said to a group of LGBTQ activists and Democratic lawmakers during a White House Pride event on Wednesday. “We’re in a battle for the soul of the nation. And when I look around this room here and at all of you here today, it’s a battle I know we will win.”

Under the executive order, the Department of Health and Human Services is in charge of expanding resources to address the issue of LGBTQ+ suicide and houslessness. According to NBC News, a committee will be established to strengthen the collection of data on sexual orientation and gender identity.

“It shouldn’t take courage to be yourself,” Jill Biden stated during the White House signing ceremony. “We know that, in places across the country like Florida or Texas or Alabama, rights are under attack. And we know that in small towns and big cities, prejudice and discrimination still lurk.”

The president’s order comes at a time when a record number of anti-LGBTQ laws have been passed. According to the Human Rights Campaign, more than 300 anti-LGBTQ+ bills were introduced in states across the country this year, with many laws specifically targeting transgender youth.

“This historic executive order will advance long-sought, LGBTQ-inclusive policies and practices that will help save young LGBTQ lives,” Amit Paley, chief executive officer and executive director of The Trevor Project, said in a statement to NBC News. “It’s past time that we put an end to the dangerous and discredited practice of conversion ‘therapy,’ and expand access to the affirming care LGBTQ young people actually need to survive and thrive.”

At the beginning of his presidency, Biden signed an executive order that protects queer and transgender people from discrimination in schools, housing, healthcare and the workplace. During Wednesday’s signing ceremony, he also called on Congress to pass the Equality Act, which would amend existing civil rights laws to provide greater legal protections to LGBTQ+ individuals.

“My message to all the young people: Just be you. You are loved. You are understood. You do belong,” Biden said during the White House Pride event. “I want you to know that as your president, all of us on this stage have your back.”