Victoria recorded its lowest daily rise in COVID-19 cases in almost three months on Sunday with 14 new cases. Mr Andrews declared the figure and declining numbers overall was "cause for great optimism and positivity". 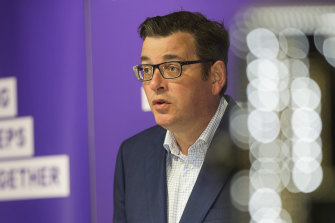 Premier Daniel Andrews says he is confident he will make “significant announcements” on Sunday. Credit:Paul Jeffers

The Premier flagged he would make "significant announcements" on September 27 as Melbourne is set to move into step two of the road map out of lockdown, but urged Victorians not to become complacent.

Nine of the new cases announced on Sunday have been linked to known outbreaks. The Casey cluster in Melbourne's outer south-east has now grown to 43 people, 30 of whom are active cases.

But Mr Andrews is adamant the people at the centre of the Casey outbreak will not be fined. Legal and infectious disease experts are united in backing the decision not to penalise people who admit during contact tracing to having breached coronavirus restrictions.

Debate has been raging about whether those within the cluster who had admitted to breaching COVID-19 restrictions should have been fined. Opposition Leader Michael O'Brien accused the government of hypocrisy and “protecting those who spread the virus while fining others”.

But experts argue that the benefits yielded by frank and honest answers during contact tracing interviews, without the fear of a penalty being imposed, far outweigh the benefits of fining people retrospectively for breaching public health directions.

The new cluster had raised fears that it could compromise the city's road map out of lockdown, when Melbourne moves into step two at midnight on Sunday, September 27, allowing child care centres to reopen, some students return to school, and permitting up to five people to gather together outdoors.

Mr Andrews said the Casey outbreak had been "expertly handled", and he was confident all of the close contacts had been traced and were being monitored for coronavirus symptoms.

"This is a good day, though," the Premier said. "A day where Victorians can be proud of the work that they've done, their commitment, their resolve to see this off; to defeat this virus in its second wave properly, comprehensively and sustainably. We can hope to keep numbers low, and that's where the trend is going."

There have been mounting calls for the government to begin easing restrictions sooner and to open up the state's economy, which has been decimated during the second wave of the pandemic. Critics in business, the federal government and Victoria's opposition have argued the conditions attached to the road map are too stringent.

Mr Andrews has committed to undertaking the biggest economic stimulus package in the state's history to revive the economy when the second wave has been brought under control and coronavirus case numbers are sufficiently low.

"We need to get this health issue dealt with first," he said. "You can't reopen the economy until you've got that COVID-normal, and you've got very good prospects … to lock that in for potentially a very, very long time."

Despite Melbourne's rolling 14-day average falling to 36.2 on Sunday, Mr Andrews said he could neither commit to, nor rule out, lifting restrictions sooner than had been flagged.

However, he said he was confident he would make "significant announcements" on September 27. 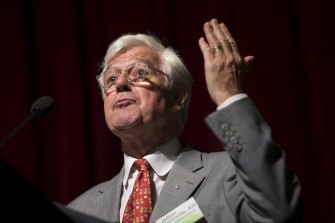 Burnet Institute epidemiologist Professor Mike Toole said people would be less likely to admit to having had contact with someone who had coronavirus, or to breaching restrictions, if they thought doing so would get them into trouble.

"If contact tracers arrive at your door, and you know you've done something wrong and there was a threat of a fine if you admitted to doing something wrong, would you admit it?," Professor Toole asked.

In that instance, he said, fining people "would be counterproductive."

Professor Toole said he did not believe any country had penalised people for admitting to breaching coronavirus restrictions during contact tracing interviews.

Liberty Victoria president Julian Burnside said: "If the punishment reduces the likelihood of obtaining the ultimate objective of the offence – which in this case, is reducing the spread of coronavirus – punishment doesn't always make sense."

Former chief Magistrate Nick Papas, QC said he hated seeing freedoms curtailed, but "as a law-abiding citizen, I accept that if the health advice is that it's better to permit the tracing to occur than to punish what is otherwise illegal activity, I'll wear that health advice".

Chair of Epidemiology at Deakin University, Professor Catherine Bennett said: "This is a really difficult one … from a public health point of view, we've got ourselves in a corner here. If this is the way contact tracing operates, people can get tested without fear or favour. They might know they've done a silly thing, but if they get tested and subsequently interviewed, that info would be protected."

Dr Marion Kainer, head of infectious diseases at Western Health, said the ability to build rapport with people so they would give honest answers about things that they may have done "which were not quite right" was one of the most important skills of contact tracing.

"Only then can we know who potentially is at risk and to protect others," she said. "It's really important not to be judgmental."