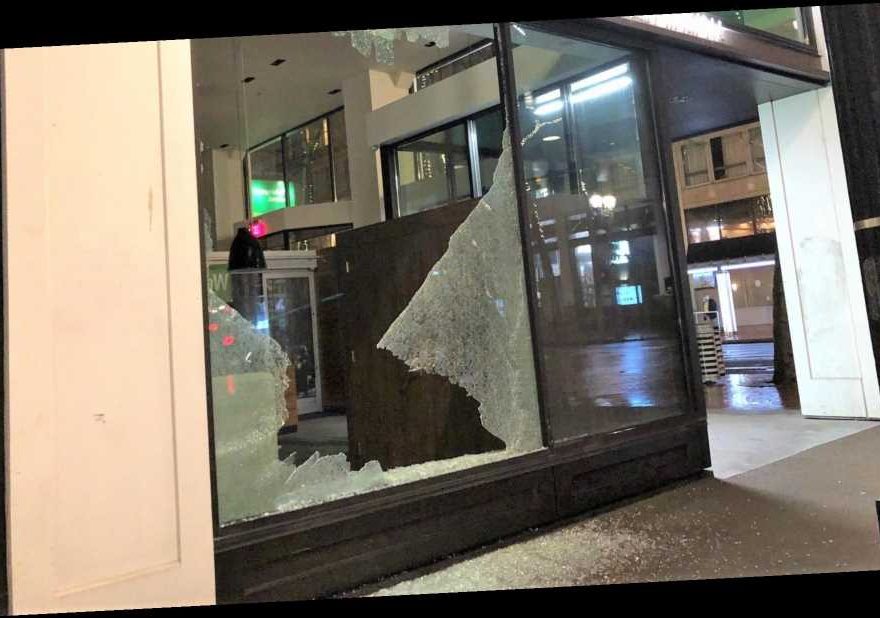 While the nation was still reeling from the raid on the nation’s Capitol on Wednesday, a group of protesters roamed through downtown Portland where they damaged property and smashed a window at the county courthouse before police broke it up.

The protesters gathered in Chapman Square Park around 9:15 p.m. and later, some sprayed graffiti on a police station, authorities said.

The group then marched to the recently opened Multnomah County Courthouse where some members attempted to break down security fencing while others used umbrellas to hide the suspects’ identities.

The protesters smashed a window at the courthouse, and a warning was given over the loudspeaker, police said. They continued to march and broke the windows of multiple businesses.

When Portland police arrived on the scene, they told the crowd it had declared an unlawful assembly; the group broke up and moved away, police said.

By 11:30 p.m., the demonstrators had mostly fizzled out. Police said no force was used, and no arrests were made.

The Multnomah County Sheriff’s Office said earlier it was "aware of a direct action event outside the Justice Center … calling for demonstrators to ‘spread fire.’"

"We will not tolerate criminal activity that jeopardizes or threatens the safety of deputies, officers, adults, in custody, employees and community members," the sheriff’s office tweeted.

Portland police said a bank, a clothing retailer, and a coffee shop were damaged by the protesters. The department is asking anyone who was a victim or whose business was affected by the rioters to call its non-emergency number at (503) 823-3333.

Portland gained national attention during the summer after it became one of the epicenters of nationwide protests that broke out in response to the killing of George Floyd in Minneapolis police custody. For more than 100 nights, the city descended into violent clashes between protesters and law enforcement.

Protests in the city reached a fever pitch in late July when President Trump deployed federal law enforcement agents to stop attacks on a federal courthouse and other U.S. property.