The Vatican released the Pope’s Covid-19 Christmas liturgical schedule on Thursday, which said that the Christmas Eve mass would begin at 7.30pm this year.

Christmas Eve ‘Midnight Mass’ at the Vatican has been celebrated at the earlier time of 9.30pm for years – to spare pontiffs from the late hour – but this year will begin two hours earlier. 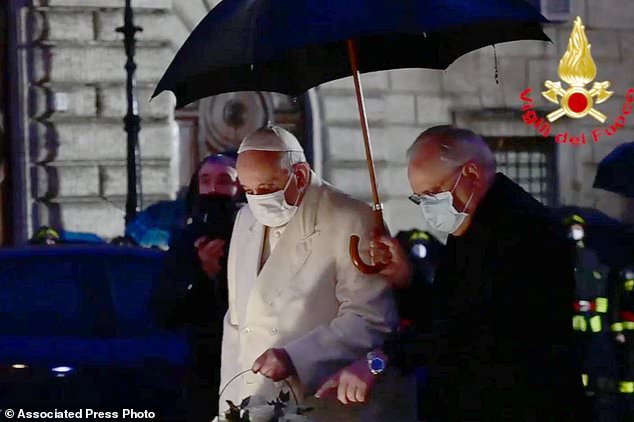 Pope Francis will celebrate Midnight Mass at the earlier time of 7.30pm to avoid Italy’s anti-coronavirus 10pm curfew. Pictured: Pope Francis wears a face mask as he arrives at the Spanish Steps in Rome to pray for people struggling in the pandemic on Tuesday, Dec 8

The change in schedule has been made to comply with Italy’s 10pm nationwide curfew following a second wave of coronavirus infections and deaths this winter.

The curfew, as well as other restrictions including restaurant closures, has been imposed to try to prevent crowds from forming.

Pope Francis’s other Christmas appointments were confirmed today and he will deliver his Christmas and New Year’s blessings in ways that aim to prevent crowds from forming.

The Vatican said his annual December 25 noontime speech and Urbi Et Orbi blessing will be delivered from St. Peter´s Basilica.

However, it wasn’t immediately clear whether he would pronounce it from the altar – as he did at Easter during the peak of Italy’s springtime pandemic – or somewhere else. 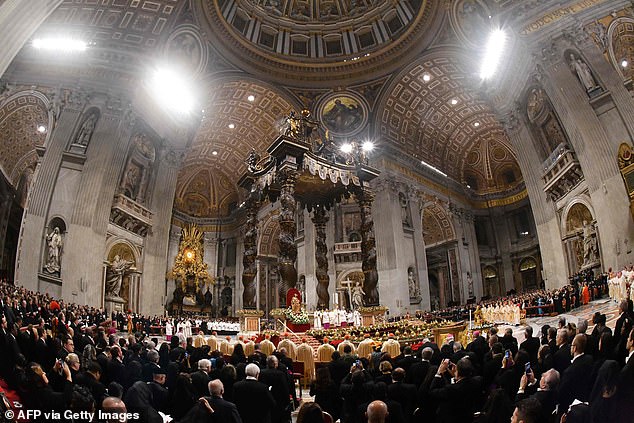 Christmas Eve ‘Midnight’ Mass at the Vatican has been celebrated at the earlier time of 9.30pm for years but this year will begin two hours earlier. Pictured: Pope Francis celebrates mass at St. Peter’s Basilica to mark the nativity of Jesus Christ on December 24, 2019

Popes have traditionally delivered the December 25 speech from the loggia overlooking the piazza, an appointment that would normally draw thousands of people to the square on Christmas morning.

This year however, Covid-19 social-distancing restrictions might make such an appointment difficult to manage.

The Italian government has decided to maintain a hard line on anti-virus restrictions over the holidays in a bid to prevent families from gathering in big groups.

Public health officials have said inter-familial transmission was one of the biggest drivers of new infections in this second wave, which has killed over 25,000 people since October. 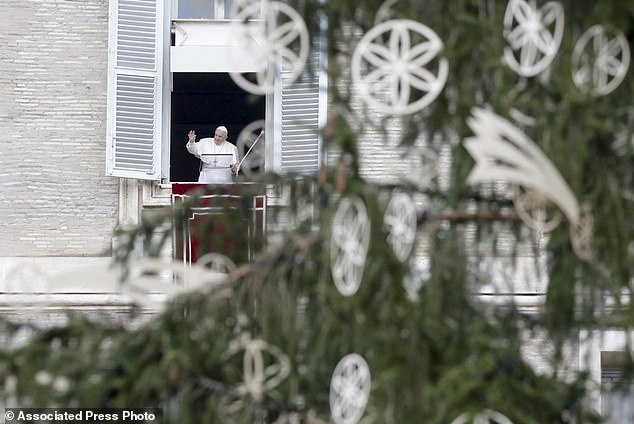 Pope Francis, framed by the Vatican Christmas tree, delivers his blessing as he recites the Angelus noon prayer from the window of his studio overlooking St.Peter’s Square, on the Immaculate Conception day, at the Vatican, Tuesday, Dec. 8

Pope Francis canceled his weekly public general audiences a few weeks ago after infections started to surge, including a cluster of a dozen cases among the Vatican’s Swiss Guards.

He now delivers his Wednesday catechism lessons from his library, as he also did during the height of the pandemic’s first wave when the Vatican was in full lockdown.

None of the services will be open to the public, however, given social-distancing norms. 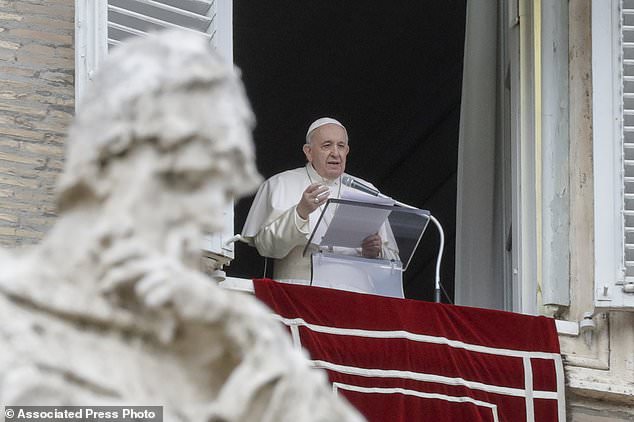 Pope Francis delivers his message during the Angelus noon prayer from the window of his studio overlooking St.Peter’s Square, on the Immaculate Conception day, at the Vatican, Tuesday, Dec. 8, 2020