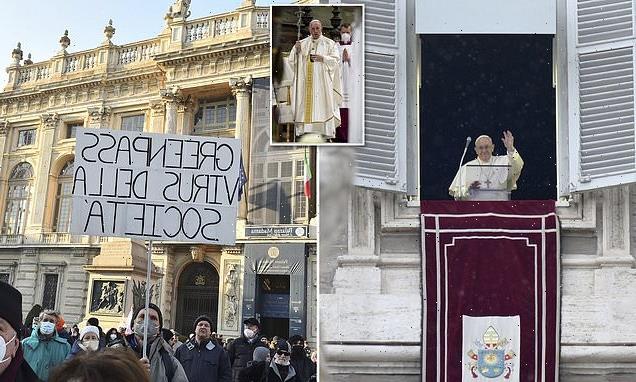 ‘Health care is a moral obligation’: Pope Francis backs global Covid vaccination programmes and denounces those who are swayed by ‘baseless information’ into refusing the jabs

Pope Francis declared today that getting vaccinated against the coronavirus is a ‘moral obligation’ and denounced how people had been swayed by ‘baseless information’ to refuse jabs.

Francis used some of his strongest words yet calling for people to get vaccinated in a speech to ambassadors accredited to the Holy See, an annual event in which he takes stock of the world and sets out the Vatican´s foreign policy goals for the year.

Francis, 85, has generally shied away from speaking about vaccination until now, though his COVID-19 advisory body has referred to it as a ‘moral responsibility.’

The Pope had previously termed vaccination as ‘an act of love’ and that refusing to get jabbed was ‘suicidal,’ but today he went a step further, saying that individuals had a responsibility to care for themselves.

‘This translates into respect for the health of those around us. Health care is a moral obligation,’ he asserted.

‘Frequently people let themselves be influenced by the ideology of the moment, often bolstered by baseless information or poorly documented facts,’ he said, calling for the adoption of a ‘reality therapy’ to correct this ‘distortion of human reason’.

Francis’ comments come days after hundreds of thousands of people protested Covid restrictions in cities across Europe on Saturday, while hundreds of demonstrators took to the streets of Turin in Italy to demonstrate against vaccine passes and rules that make vaccines mandatory for anyone more than the age of 50. 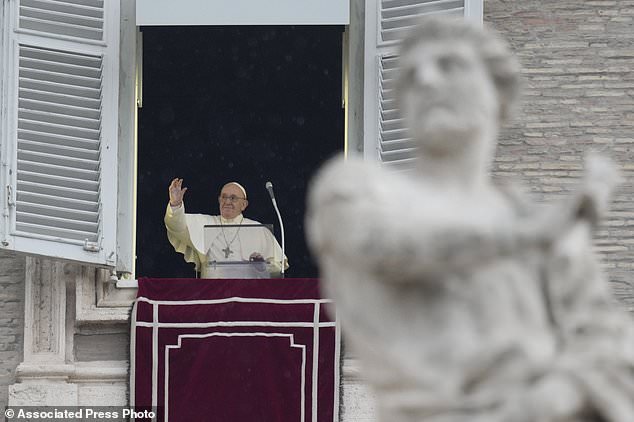 Pope Francis used some of his strongest words yet calling for people to get vaccinated in a speech to ambassadors accredited to the Holy See, an annual event in which he takes stock of the world and sets out the Vatican´s foreign policy goals for the year (pictured: Francis delivers the Angelus noon prayer in St. Peter’s Square, at the Vatican, Sunday, Jan. 9, 2022) 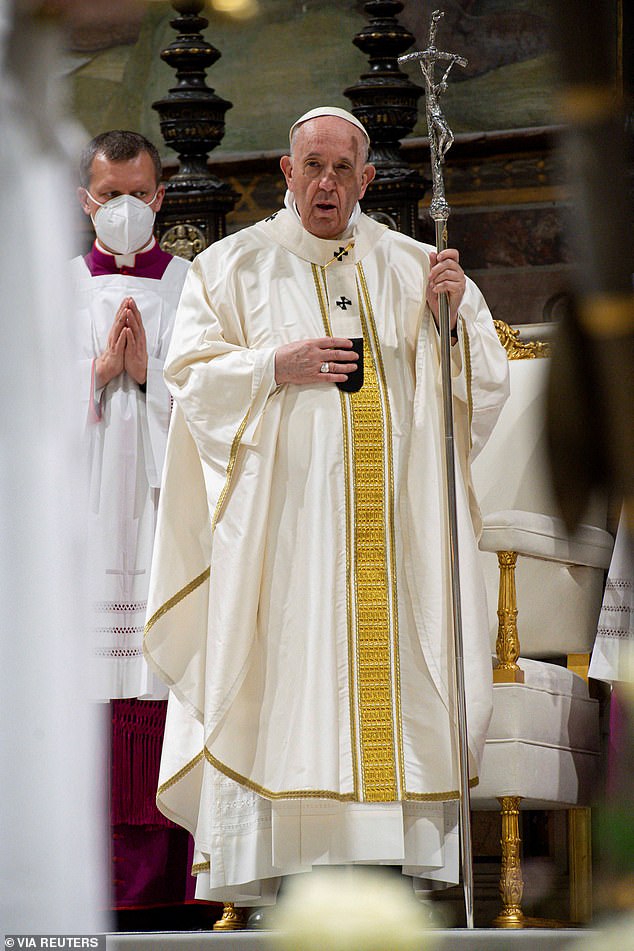 Francis today declared that individuals had a responsibility to care for themselves ‘and this translates into respect for the health of those around us. Health care is a moral obligation,’ he asserted. 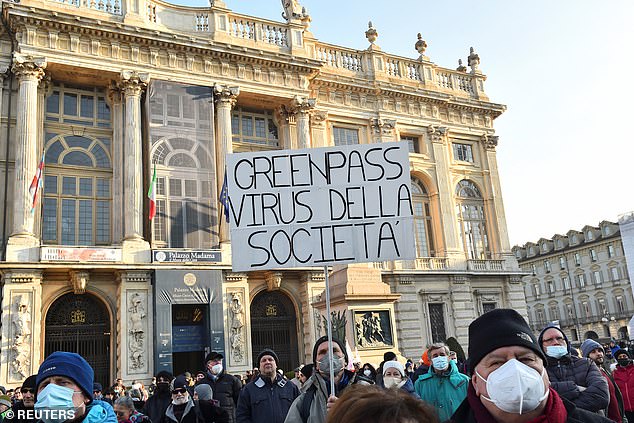 A demonstrator holds a sign that reads ‘Greenpass virus of the society’, during a protest against mandatory vaccinations for people over 50 and stricter rules for the unvaccinated who, under the new regulations, will not be able to do a variety of activities including using public transport and sitting at restaurants, in Turin, Italy, January 8, 2022

‘Vaccines are not a magical means of healing, yet surely they represent, in addition to other treatments that need to be developed, the most reasonable solution for the prevention of the disease,’ Francis said.

Some Catholics, including some conservative U.S. bishops and cardinals, have claimed vaccines based on research that used cells derived from aborted fetuses were immoral, and have refused to get the jabs.

The Vatican´s doctrine office, however, has said it is ‘morally acceptable’ for Catholics to receive COVID-19 vaccines based on research that used cells derived from aborted fetuses.

Francis and Emeritus Pope Benedict XVI have been fully vaccinated with Pfizer-BioNTech shots.

Francis repeated his call for universal access to the shots, particularly in the parts of the world with low vaccination rates, and called for revisions to patent rules so that poorer countries can develop their own vaccines.

‘It is appropriate that institutions such as the World Trade Organization and the World Intellectual Property Organization adapt their legal instruments lest monopolistic rules constitute further obstacles to production and to an organized and consistent access to health care on a global level,’ he said.

Meanwhile, hundreds of thousands of protestors marched through the streets of several European cities this weekend to demonstrate against Covid restrictions in their respective countries.

Major demonstrations were held in France, Germany, Austria and Italy as thousands joined together in protest against what are perceived to be excessively strict restrictions and mandatory vaccinations.

The Pope’s comments came after a protest in Turin, Italy on Saturday railed against new laws that make vaccines mandatory for anyone more than the age of 50.

Italy is targeting the unvaccinated with a host of new coronavirus restrictions which come into force today, with proof of vaccination or recovery from a recent infection required to enter public transport, coffee shops, hotels, gyms and other everyday activities.

The new ‘super’ health pass requirement, which eliminates the ability to show just a negative test to gain access to services, comes as many Italians return to work and school after the Christmas and New Year’s holidays. 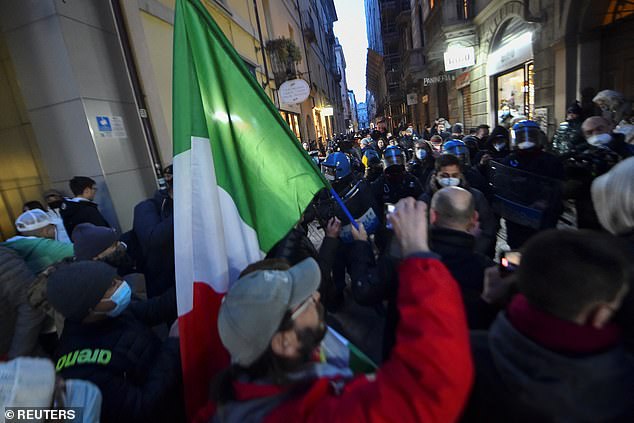 Italian riot police stand in front of demonstrators in Turin, Saturday Jan 8, during a protest against mandatory vaccinations for people over 50 and the banning of unvaccinated people from many public venues 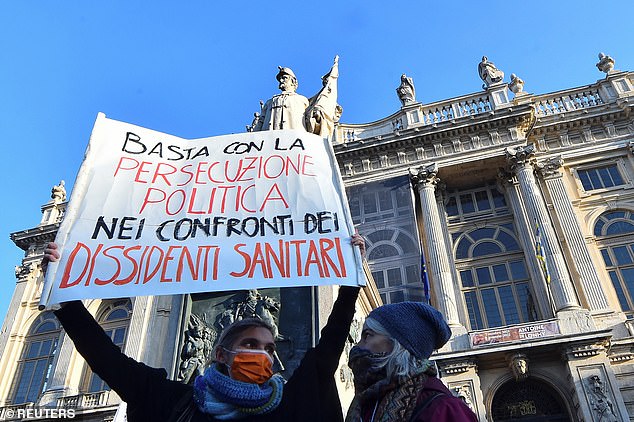 A demonstrator holds a sign that reads ‘Enough with the political persecution of health dissidents’, during the protest in Turin

In his address today, Francis also reiterated his defence of migrants, saying each country should accept as many as possible and that responsibility for their integration should be shared.

On climate change, he said the results of last year’s COP26 summit in Glasgow were ‘rather weak in light of the gravity of the problem’ and hoped that action on global warming could be consolidated at COP27 planned for Egypt in November.

He repeated calls for dialogue in areas of conflict or crisis such as Lebanon, Ukraine and Myanmar as well as his call for a ban on the possession of nuclear weapons.