Work from home U-turn: Boris Johnson tells staff who can ‘work effectively from home’ NOT to return to offices – putting Britain’s city centres in renewed peril

Business leaders last night warned of the ‘crushing blow’ to city centres as the Government told office workers to work from home throughout winter.

In an extraordinary U-turn, Boris Johnson yesterday scrapped plans to get more employees back in to their workplace to help revive the economy and instead told them that they should work from home if they could.

The move left firms scrambling to reverse plans to return thousands of staff to their offices.

Within hours of yesterday’s announcement, Barclays said that 1,000 workers who had gone back in recent weeks would now revert to working from home. 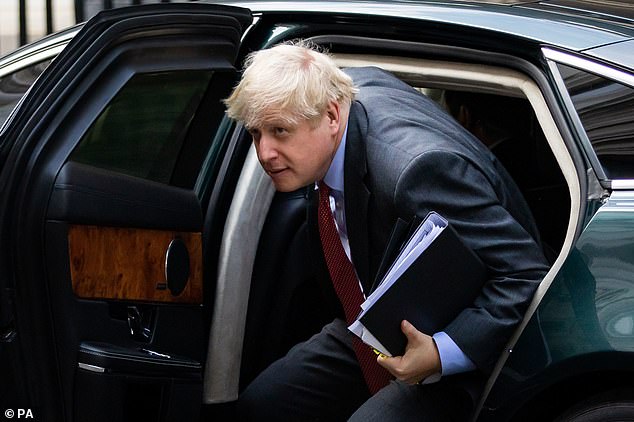 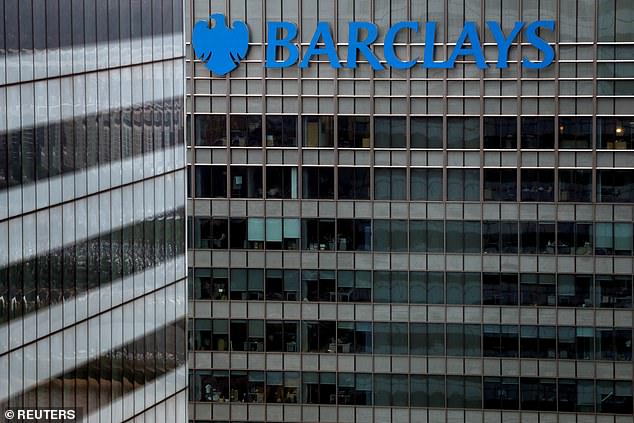 Within hours of yesterday’s announcement, Barclays said that 1,000 workers who had gone back in recent weeks would now revert to working from home

Mr Johnson had been encouraging workers to return to their desks since August, ramping up the pressure on businesses to bring back employees after schools returned at the beginning of this month.

But yesterday in the Commons he said: ‘We are once again asking office workers who can work from home to do so.’

Should I stay or should I go? What is the law on working from home?

Office workers and bosses could be locked in talks about working from home – amid fears some staff could refuse to go in or stay home.

‘We advise employees to speak to employers. Where we talk about what’s possible, the employee could disagree, but if an employer can justify why it’s impossible and asks their employees to still go in, to not do so could be failure to follow reasonable management instructions.

‘At the moment it’s not like last time when people weren’t able to leave their homes. The approach at the moment emphasises that the economy needs to keep going and with furlough stopping, it’s about people keeping their jobs.

‘If someone said they weren’t going in because Boris Johnson said it was better to work from home, the employer would have to explain why this wasn’t possible. If they can prove it’s not possible, the employee should still go in.

‘I think there will be a lot of conversations like this tonight and tomorrow. The use of the word ‘possible’ means that the employer seems to have more decision making power than before.’

Downing Street later said those who could ‘work effectively from home should do so over the winter’.

The Prime Minister stressed this was not a ‘general instruction to stay at home’.

He told MPs: ‘In key public services – and in all professions where homeworking is not possible, such as construction or retail – people should continue to attend their workplaces.’

‘The new restrictions must be regularly reviewed to minimise the damage to the economy while safeguarding the health of the nation – not just physical health, but mental health and economic health.’

Speaking on BBC Radio 5 Live, she warned there ‘can be no avoiding the crushing blow new measures bring for thousands of firms, particularly in city centres’.

She added: ‘Renewed advice to work from home where possible will keep our town and city centres under great economic pressure, just as people were starting to make their way back.’

In the Commons, former cabinet minister Stephen Crabb said there would be ‘dismay amongst those people for whom the return to Covid-secure workplaces has been so important for mental, physical, social wellbeing’.

He told MPs: ‘While working from home has been great for many – for senior managers living in larger properties with nice gardens – that hasn’t been the experience for a great many others living in cramped, overcrowded accommodation.’

Tory MP Richard Drax added: ‘What we are doing is causing undue harm to our economy. Towns and city centres are dead – no one’s there, all the shops have gone, jobs have gone.’

Parliament is expected to carry on sitting in the way it has done since new coronavirus procedures were introduced.

‘There isn’t any change in regard to the advice for MPs, I think we would treat that grouping as one which is providing an essential service,’ the Prime Minister’s spokesman said. 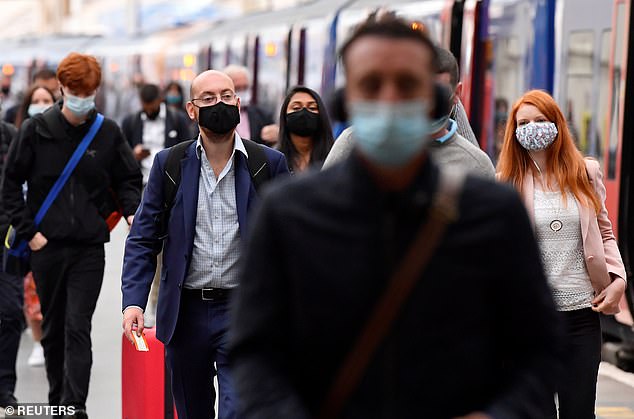 The move left firms scrambling to reverse plans to return thousands of staff to their offices  (pictured, Waterloo station earlier this month)

But efforts to get 80 per cent of civil servants back in Whitehall, announced less than three weeks ago, have been abandoned.

Permanent secretaries will agree with their ministers who needs to be in the office to maintain ‘full delivery of public services’.

Those who are working in essential services will be told to continue going in to their Covid-secure offices – for example those administering passport and driving licence applications.

The PM’s spokesman said the new advice was part of a package to ‘help to reduce contact, break transmission between different households and limit outbreaks’.

Just as the sun was rising on business, we’re back in darkness, says RUTH SUNDERLAND

Driving into work at 7.30 on Monday morning along the M4, I was delighted to find myself stuck in a traffic jam. After the preternaturally quiet motorways and half-empty rail carriages of recent months, gridlock felt like welcome normality.

Nobody loves commuting, but for a brief moment it seemed the rush hour and the bustling, noisy, vibrant, creative commercial life that goes with it might just have begun to return.

Fat chance. Any such hopes have been brutally quashed. Economics was never a strong suit for the Prime Minister. But now he appears to be utterly in thrall to his scientific advisers, no matter how dubious their statistics or how tenuous their grasp of the harm they will inflict on businesses and jobs.

What is truly heartbreaking is that the latest version of lockdown comes at a point where firms were getting back on their feet. The economy was doing better than most had dared to predict, but those green shoots have been trampled back into the ground.

As recently as last month, the Bank of England’s chief economist, Andy Haldane, wrote in this newspaper that Britain was on course for a rapid revival. 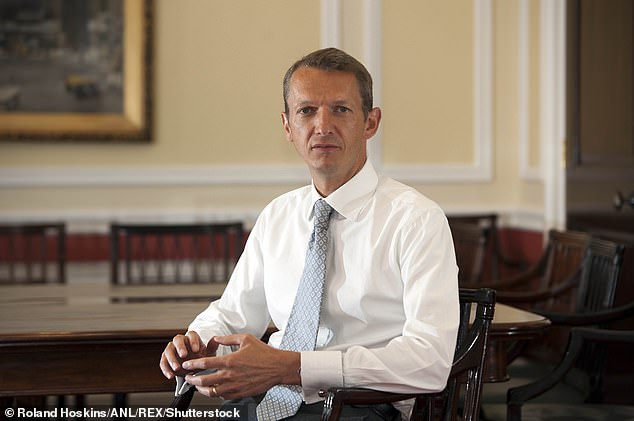 As recently as last month, the Bank of England’s chief economist, Andy Haldane (pictured), wrote in this newspaper that Britain was on course for a rapid revival

Not any more. That recovery depended on consumer spending in shops, restaurants and pubs, boosted by employees returning to their workplaces. The Government’s efforts to get workers back in to their offices were always far too half-hearted. The guidance has now screeched into full reverse, to the delight of the Work From Home warriors.

This irrational and ill-judged clampdown has taken a sledgehammer to confidence in the business world, where many have begun to harbour serious doubts about Boris and his handling of the pandemic. There is very little in the way of light at the end of this long, dark tunnel.

The new restrictions, according to Boris, could last six months. That takes us to March 2021 and means we will have been living under some form of lockdown for an entire year.

Very few businesses can withstand such a marathon of pain.

The advice to resume working from home is particularly perilous. Not only is it a slap in the face for employers who have spent fortunes making their premises Covid-secure, it also risks the permanent corrosion of the country’s work ethic.

As an emergency measure it was highly effective. But the speed with which many employees have seized on it to argue they should be allowed to work where they please in perpetuity raises questions as to their commitment. For hundreds of thousands of people, sadly, the issue is not going to be working from home but whether they have a job at all.

Whitbread, which owns Premier Inn, announced yesterday it is cutting 6,000 jobs and Wetherspoon said it is slashing 450 of its staff – and these are before the new measures. 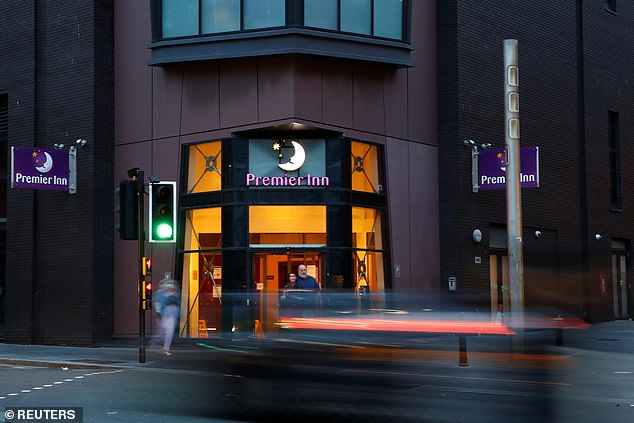 Whitbread, which owns Premier Inn (pictured in Liverpool), announced yesterday it is cutting 6,000 jobs and Wetherspoon said it is slashing 450 of its staff – and these are before the new measures

There is no ducking the fact there will be many, many more.

Bad though all of this is, the psychological toll is even worse.

Just when relief seemed to be in sight, firms are crushed again. This is simply soul-destroying for business people, most of whom have responded with huge grit and generosity to the pandemic.

Entrepreneurs are sometimes given a bad name but plenty have emerged with flying colours.

Legions of firms, large and small have pitched in to the national effort to beat the virus, switching production to PPE and helping local hospitals and communities.

They have strained every sinew to adapt to life with the virus but they have been kicked in the teeth and betrayed by the Government’s inconsistent and poorly thought-out handling of the crisis.

Business people are under no illusions they must comply with any sensible measures to protect the population from the virus.

They know it is in their self-interest to do so, because the sooner we conquer Covid, the sooner they can get their cash-tills ringing.

So if they were presented with rules that were clear, consistent and rational then they would find a way to cope. Unfortunately, this is far from the case.

One minute ministers are urging us in to restaurants to ‘eat out to help out’, and the next we are being treated like naughty children who can’t be trusted to behave sensibly in a bistro after our 10pm bedtime.

As the mood across the country darkens and descends into fear, it is hard to remember that only a few months ago Britain was an open, entrepreneurial and freedom-loving country.

These are qualities which are conducive to a vibrant, confident economy and which attracted investors from around the world.

Now, with its misbegotten Covid regime of curfews and even drafting in the Army, the atmosphere is chilling.

It is hardly an exaggeration to say it is starting to feel redolent of a repressive regime, with a cowed population too petrified to venture out for work or leisure.

Apart from the direct economic costs, which will be vast – £100billion and counting in Government support – if we drift in this direction much further we will pay an even heavier price. For centuries our economy has thrived through openness and liberty.

Allowing ourselves to be ruled by fear is inimical to everything that has made us a great trading nation and it threatens to ruin our chances of prosperity post-Brexit. How can we embark on a future outside the EU in a state of national funk?

I am not qualified to pass judgment on the medical prowess of Whitty and Vallance, at whose behest the PM has imposed his new curbs, though their views are disputed by rival experts in their own field.

What I can say with certainty, however, is that this is a very dangerous – and quite probably needless – gamble with our already enfeebled economy.