Pizza Express to shut 73 restaurants with 1,100 jobs at risk as the chain struggles to stay afloat following the coronavirus lockdown

Pizza Express will shut 73 of its restaurants across Britain with the potential loss of 1,100 jobs in a bid to stay afloat in the wake of the coronavirus shutdown, the chain has announced.

The company, which currently has around 454 restaurants in the UK, said on Tuesday it has finalised a proposal to reduce its restaurant and rental costs via a company voluntary arrangement (CVA).

It said that although the majority of its restaurants were profitable before lockdown was imposed, earnings had been declining across the Pizza Express estate for the last three years. 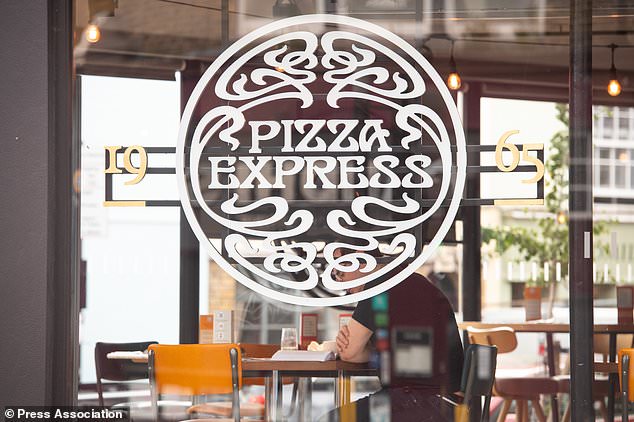 Up to 1,100 jobs could go at Pizza Express as it announced plans to shut 73 stores (Dominic Lipinski/PA)

It added that the reduction in revenue caused by the enforced closure of all restaurants, the cost of reopening and the UK’s uncertain economic future meant its rental costs were no longer sustainable.

Pizza Express, which is majority owned by Chinese firm Hony Capital, also confirmed it had hired advisers from Lazard to lead a sale process for the business.

It said it would hold a virtual meeting for its creditors on September 4 to seek approval for the measures set out in the CVA.

Zoe Bowley, Pizza Express’s managing director for the UK and Ireland, said: ‘Unfortunately, the impact of the global pandemic has meant that we have had to make some incredibly tough decisions to safeguard Pizza Express for the long term.

‘Today we have confirmed that 73 of our pizzerias are proposed to close permanently.’

Ms Bowley said that in most cases, the stores selected for closure are near to another Pizza Express that has already reopened or will be reopening soon.

She added: ‘Our focus is on our people whose jobs are impacted and we will be doing everything we can either to redeploy them or to support them in finding roles elsewhere.

‘Hard as this process is, it will protect the jobs of over 9,000 of our colleagues and provide a strong footing for Pizza Express to meet future challenges and opportunities.’

Melanie Leech, chief executive of the British Property Federation, said: ‘These situations are never easy, particularly now for the retail, hospitality and leisure businesses on our high streets at the sharp end of the Covid-19 pandemic.

‘Property owners, however, need to take into consideration the impact on their investors, including the millions of people whose savings and pensions are invested in commercial property, as they vote on any CVA proposal.’

The news comes after Marks & Spencer announced it would axe 7,000 jobs as part of a further shake-up of its stores and management in the face of the coronavirus crisis.

The London-based retail giant revealed the bulk of the cuts would be made across its stores, hitting around 12 per cent of its 60,000 shop-based staff, as well as a smaller number of support centre and regional management workers.

M&S, which employs 85,000 people worldwide, expects a ‘significant’ number of roles will be cut through voluntary departures and early retirement.

The group said it will also create some jobs through investing further in online warehousing and its new ambient food warehouse.

M&S had already begun a significant restructuring before the pandemic hit, shutting under-performing stores and boosting its online sales.

The coronavirus outbreak has now accelerated those plans.

The job losses add to many thousands already announced across the retail sector as the pandemic wreaks havoc on Britain’s high street, with department store chain Debenhams last week announcing another 2,500 staff cuts.

It brings the total number of cuts and roles at risk in Britain’s battered retail sector to more than 41,000.

According to figures compiled by the PA news agency, the retail bloodbath has claimed or put under threat at least 41,391 UK jobs since the lockdown in late March.

The company announcement of 95 potential redundancies comes two months after it announced more than 600 jobs were to be lost at its operations in the east of the city – 400 core staff and 200-plus contractors.

It has been predicted some 6.5 million jobs in total will go in the UK because of the coronavirus disaster.

It has led to calls for a targeted support scheme for the sector amid concerns the Government’s action will not be enough to save jobs or specifically help or retrain those in retail who have lost their roles.

The Government’s furlough scheme for workers comes to an end in October and while it has launched the back to work bonus, offering firms £1,000 for every furloughed staff member a business retains, there are fears there will still be thousands more retail jobs axed.

Chancellor Rishi Sunak unveiled his Plan for Jobs in the summer statement alongside a 15% cut in VAT to add to the 100% business rates relief already available for eligible businesses.

It comes as M&S revealed total sales in its hard-hit clothing and home arm plunged 29.9 per cent in the eight weeks since shops reopened.

Store sales fell 47.9 per cent but online surged 39.2 per cent. It said sales declines were improving but that it was ‘clear that there has been a material shift in trade’. 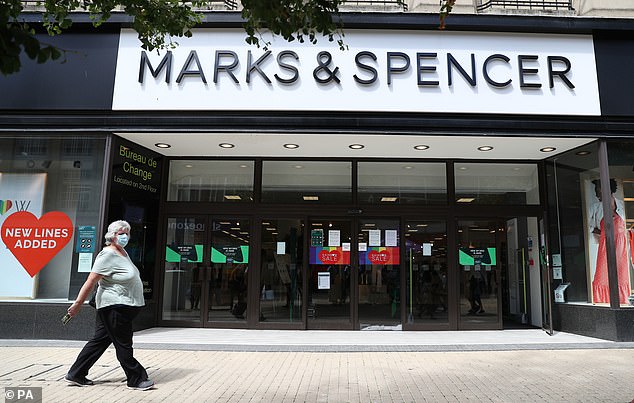 The news comes after Marks & Spencer announced it would axe 7,000 jobs as part of a further shake-up of its stores and management in the face of the coronavirus crisis

It comes ahead of a new partnership between M&S and Ocado, set to launch next month.

The venture will see M&S products become available on the online supermarket from September 1.

With online sales surging amid lockdown, the partnership is expected to be a significant boon to the business.

A spokesman said: ‘Whilst it is too early to predict with precision where a new post-Covid sales mix will settle, we must act now to reflect this change.’

The group said the pandemic had shown staff can work ‘more flexibly and productively’ and are able to multi-task and move between food, clothing and home departments.