A pilot has been banned from flying for life after inviting a female passenger into the cockpit during a flight in China.

The passenger, reported to be the pilot’s girlfriend, posed for a picture in the captain’s seat before writing ‘I am really so happy’ in a social media post.

The incident occurred during a domestic flight operated by Chinese carrier Air Guilin. 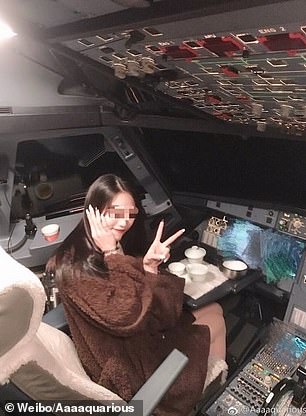 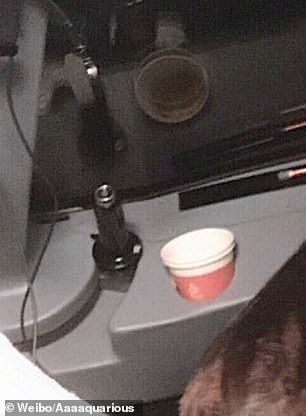 A passenger has been allowed to enter the cockpit during a flight by the captain, who is said to be her boyfriend. While sharing the images on social media, the woman said: ‘Super thankful for the captain. I am really so happy’. The incident took place on an Air Guilin plane in China

The airline has also grounded other members of the cabin crew and launched an investigation.

The company’s Chairman, General Manager and four other senior executives have been penalised over the matter as well.

The carrier, based in the southern Chinese city of Guilin, said it had zero tolerance policies towards inappropriate and unprofessional behaviour that may threaten aviation safety.

The news came to light when a popular aviation blogger on China’s Twitter-like Weibo shared two pictures uploaded by an air passenger.

In one of the images, a young woman wearing a brown dressing gown can be seen flashing a V-sign while sitting in what appears to be a cockpit.

A second picture purports to show a paper drinking cup in the cockpit. 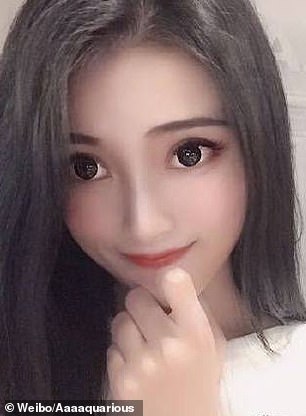 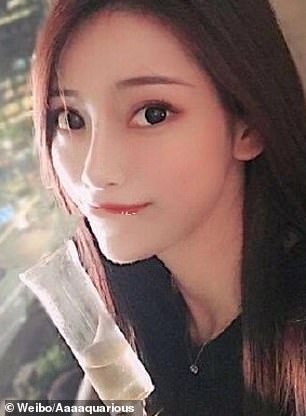 The female passenger, a student at the Guilin Tourism College, is dating the pilot, reported news outlet The Paper. The photos in question have been removed by her from social media

The now-deleted post came with the caption: ‘Super thankful for the captain. I am really so happy.’

The blogger wrote: ‘[I] can’t believe that things like letting irrelevant passengers sitting in [the captain’s] seat during a commercial flight should happen to civil aviation in China.’

The blogger urged the authorities to investigate the matter. 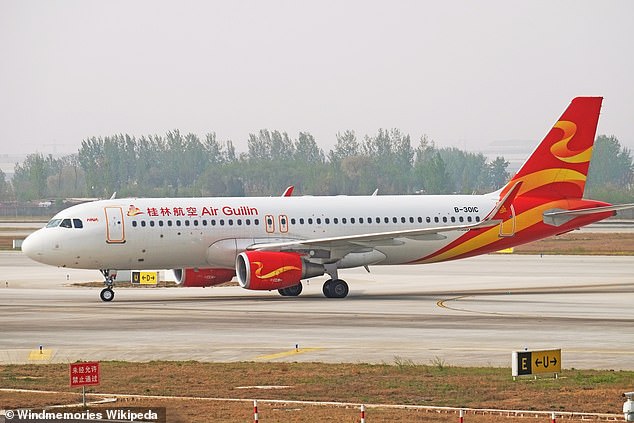 ‘Air Guilin prioritises the safety of passengers at all times,’ the Chinese carrier said yesterday

Air Guilin yesterday confirmed that the incident had taken place during a domestic flight earlier this year.

Flight GT1011 was en route from Guilin to Yangzhou, in eastern China, on January 4.

The female passenger is a student at the Guilin Tourism College and the girlfriend of the pilot, reported news outlet The Paper.

In a statement on Monday, Air Guilin vowed to ‘reflect deeply’ over the incident and improve the company’s management ‘earnestly’.

‘Air Guilin prioritises the safety of passengers at all times,’ the statement said.

According to another internal document, the airline has revoked the captain’s pilot license and grounded him for life.

The flight’s co-pilots, cabin manager, one stewardess and one on-board security officer were banned from flying for 12 months.

The carrier’s Chairman was given a serious warning and had three months’ of salaries deducted.

The General Manager was demoted and also had three months’ of salaries deducted.

The carrier has vowed to prevent any similar incidents from happening in future.