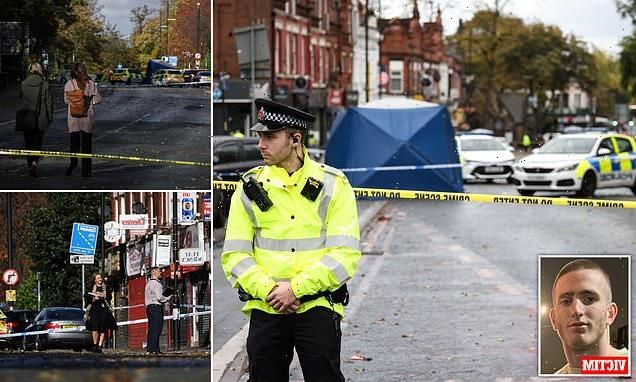 PICTURED: Manchester student, 19, who was stabbed to death in a ‘random attack’ near university halls as he walked home from a party is named, as his family pay tribute

The family of a student who was stabbed to death by a stranger while walking home from a party in Manchester has paid tribute to the ‘loved’ 19-year-old who they described as a ‘gentle giant’.

Luke O’Connor was stabbed in a ‘random attack’ in an area close to student halls in Fallowfield in the early hours of yesterday morning.

Police have now released an image of Mr O’Connor, who was in his second year of studying Business Management at Manchester Metropolitan University.

Paying tribute to him, his family said: ‘Our hearts yearn for the loss of Luke; we are truly devastated by this tragedy. Luke was loved by so many people, and he knew how much he was loved in return. 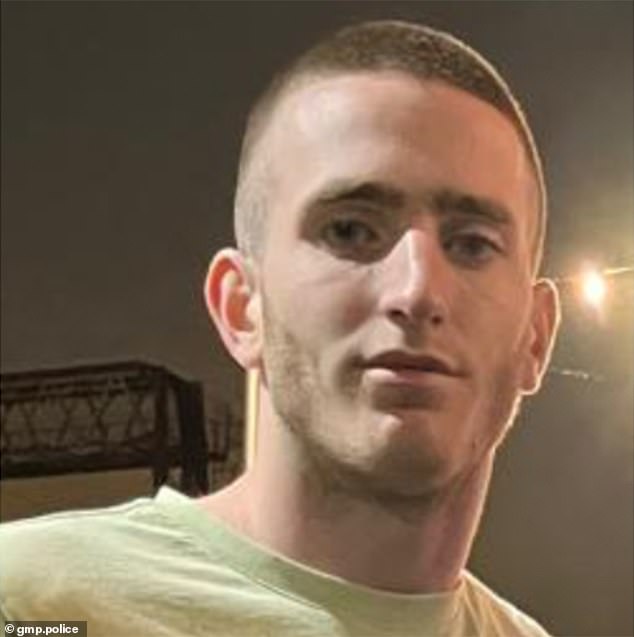 Luke O’Connor, 19, was stabbed in a ‘random attack’ in an area close to student halls in Fallowfield in the early hours of yesterday morning

‘He was a second year Business Management student at university. He loved the freedom of student living and studying and was loving life in Manchester.

‘Luke was the youngest of three boys in our family and was a gentle giant with big hopes and dreams for the future.

‘His biggest dream was to travel the world, but now Luke will never be able to fulfil that dream.

‘Luke loved music, football and was a big supporter of Liverpool Football Club, who he followed religiously from a young age.

‘He had a profound impact on so many people throughout his life. He was truly one of a kind, who’s presence would light up any room.

‘Luke’s friends also adored him, as he adored them. They often called Luke a ‘Legend’ and ‘the life and soul’ of everything he did. Everyone who met him, truly loved him. 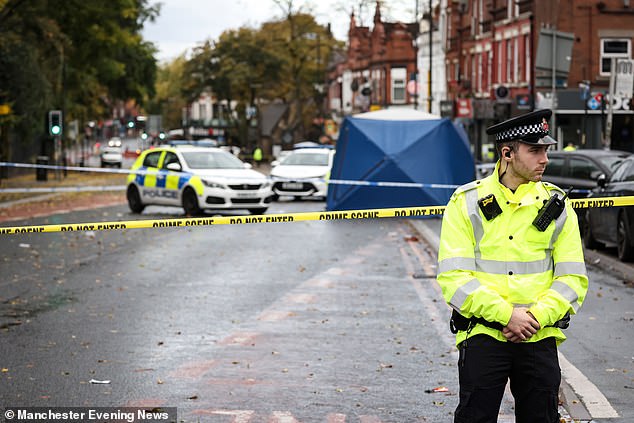 Detectives have launched a murder investigation, as they work to ‘to find the person responsible’ for Mr O’Connor’s killing.

His family’s statement went on: ‘Our lively, bubbly, beautiful boy has been taken from us and our family are now left with a hole in our hearts that will never be filled.

‘Justice needs to be served as we have lost our beautiful young Luke, who was robbed of life.

‘We will continue to honour his name for as long as we are all here, and his legacy [will] go on forever.’ 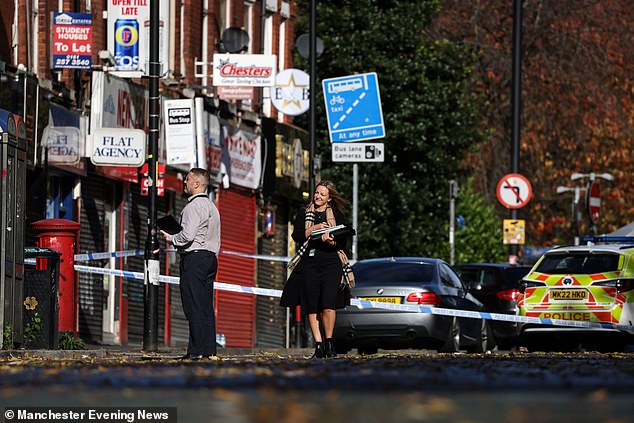 Yesterday morning, Mr O’Connor was stabbed in a ‘random attack’ in an area close to student halls in Fallowfield. Pictured, police at the scene

Greater Manchester Police (GMP) officers attended the scene of the stabbing on Wilmslow Road at around 2am on Wednesday, where they found him with stab wounds and gave him CPR.

Mr O’Connor was taken to hospital, where he later died.

Neighbours heard ‘screams and shouting’ when the young man was stabbed to death by a stranger while on his way home from a party yesterday.

Locals recalled hearing a commotion in the early hours of the morning, before helicopters could be heard overhead.

Police cordoned off Wilmslow Road between the junction with Mabfield Road and Wilbraham Road at around 2am, which remained in place until Wednesday evening. 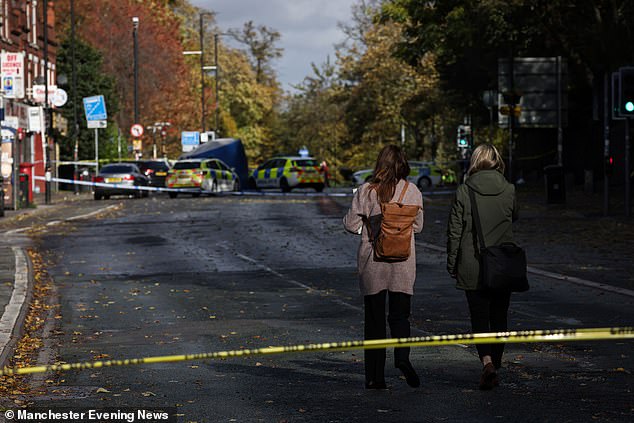 People living nearby recalled hearing a commotion in the early hours of the morning, before helicopters could be heard overhead

Cordons were also in place on Furness Road and Cawdor Road for much of the day, where neighbours recalled hearing ‘screams and shouting’ in the early hours of Wednesday morning followed by police helicopters.

‘I didn’t know what had happened, but it sounded horrible,’ one resident said told Manchester Evening News, with another adding that they don’t feel safe living there. 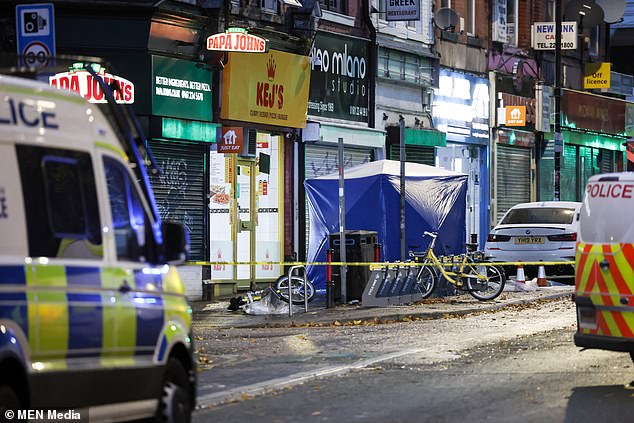 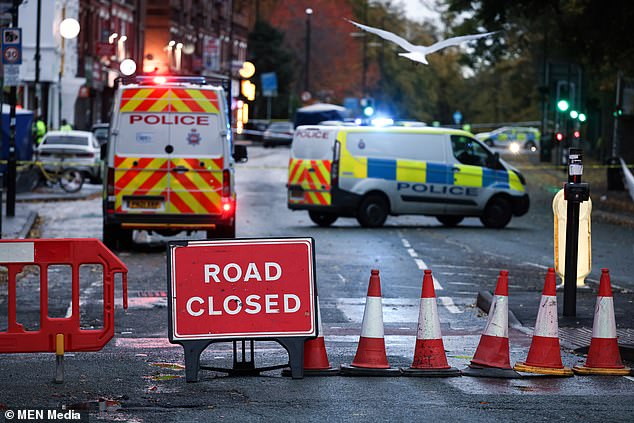 A MMU spokesperson said previously: ‘We can confirm that Greater Manchester Police has informed us that one of our students died in an incident in Fallowfield in the early hours of Wednesday morning.

‘Our thoughts are with their family and friends at this difficult time. We will be contacting them to offer our help and support.

‘This will be a terrible shock to our whole community and we will be arranging for professionally trained counselling staff to support any students and staff who are affected by the incident. We cannot offer further comment at this time.’

In a statement, the University of Manchester confirmed it will also be increasing safety patrols in the area, and offered counselling and support to any affected students.

Detective Superintendent Neil Jones of Greater Manchester Police South Manchester Division said: ‘I know that people in Manchester will be shocked and concerned by this incident.

‘I share this concern and assure you that there is a dedicated team of specialist officers in the area who are investigating at pace to find the person responsible.

‘Local officers will be patrolling the areas and I urge anyone with information or concerns to speak to those officers who are on hand to help and support you.’ 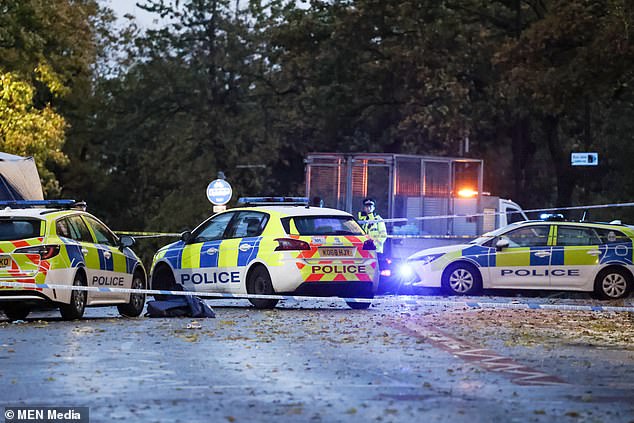 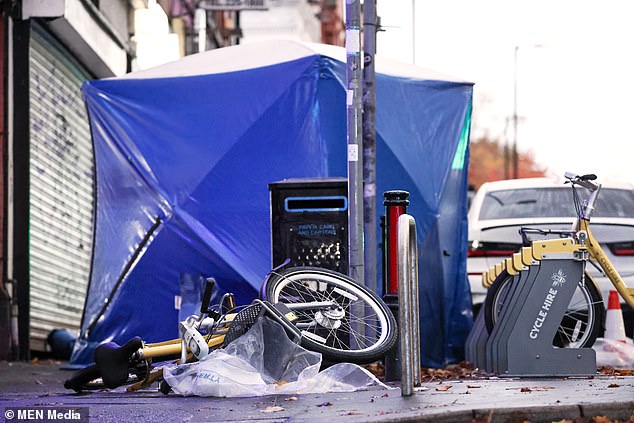 It is understood that Mr O’Connor was attacked by someone he did not know while on his way home from a house party. Pictured, the scene on Wednesday 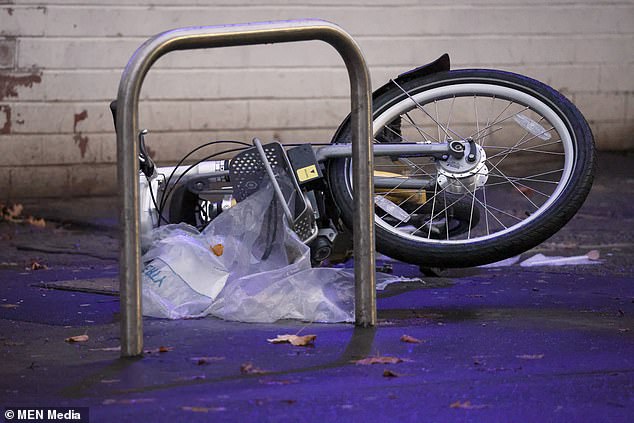 Police officers were alerted to the ‘seriously injured’ student, 19, at around 2am on Wednesday morning and attempted CPR before he sadly died near the University of Manchester’s Owens Park halls

Yesterday the Detective Superintendent said: ‘The investigation is in its early stages, but I can assure you that our officers are working round the clock and carrying out extensive enquiries to establish the full circumstances surrounding this incident.

‘We are actively pursuing leads and will relentlessly pursue the offender to ensure they are brought to justice.’

He added: ‘There will be more officers out on the streets in Fallowfield and the surrounding area over the coming days conducting high visibility and plain clothes patrols to gather intelligence and reassure the community.

‘Greater Manchester Police operates a Student Safe Operation with our partners on Wednesday, Friday and Saturday nights where our officers patrol the student areas at night, and these efforts will ramp up and be given extra resources.

‘I hope this goes some way to reassure the community and if anyone has any information about this incident or has any concerns, I urge you to speak to these officers. They are there to help and support you.’

Information related to the investigation can be shared with the force via its Major Incident Public Portal.