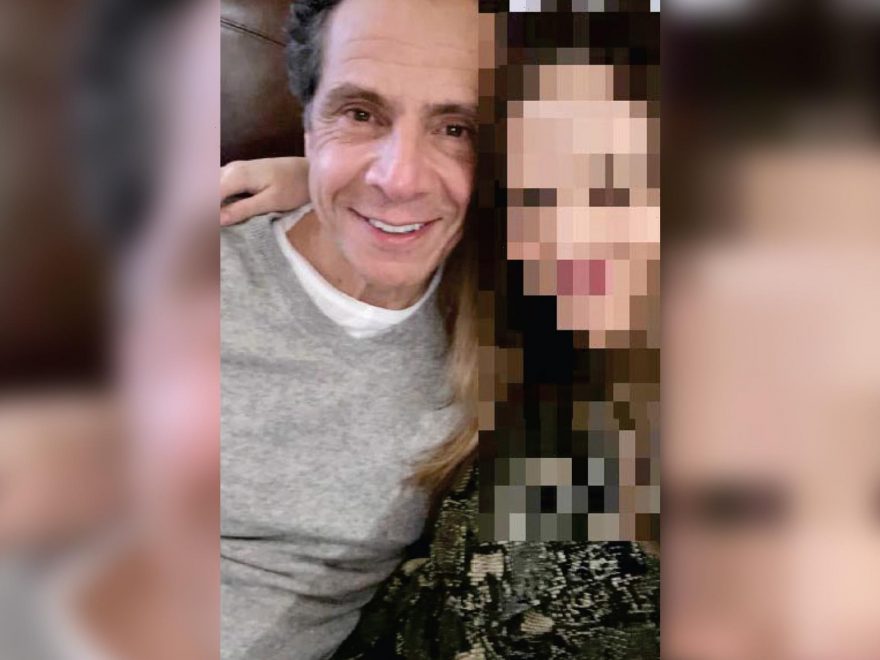 The women who accused Gov. Cuomo of sexual harassment — and what he allegedly did

This takes Candid Camera to a whole new level.

This snapshot of New York Gov. Andrew Cuomo was taken right after he allegedly groped an executive assistant in his home.

The photo, released Tuesday as part of the official report into sexual harassment allegations against Cuomo shows the governor smirking while he sits back on a couch with an aide.

The staffer, named only as “Executive Assistant #1,” one of the primary complainants in the report, told investigators that the governor had asked her to snap selfies as the two worked together inside his office at the Executive Mansion in Albany on Dec. 31, 2019.

As she held up the camera, Cuomo “moved his hand to grab her butt cheek and began to rub it” for at least five seconds, the report alleges.

The assistant, who is in her 30s, “was shaking so much during this interaction” that the photos came out blurry — and Cuomo suggested the two sit down to take one more.

He then allegedly told the woman to send the picture to another aide, Alyssa McGrath — — who has also spoken out about sexual harassment in the governor’s office — and said “not to share the photograph with anyone else.”

The sickening selfie was included in the bombshell report, which concluded that Cuomo sexually harassed several women in violation of state and federal law.

The unnamed aide told investigators that she immediately deleted the blurry selfies, because she was “embarrassed” and didn’t want Cuomo “to see how nervous she was,” the report states.

Investigators tried to retrieve the deleted images, but were not able to.

The woman said she didn’t report what happened because she was terrified.

“[T]he way he was so firm with [me] that I couldn’t show anyone else that photo, I was just terrified that if I shared what was going on that it would somehow get around,” she told investigators.

“And if Stephanie Benton or Melissa [DeRosa] heard that, I was going to lose my job,” she added, referring to two of the governor’s top aides.

In an interview with investigators, Cuomo admitted that he and the staffer took a photo together, but said it was her idea, because “he does not like to take selfies.”

The assistant also alleged that Cuomo groped her breast in the Executive Mansion on Nov. 16, 2020.

She was trying to leave the home and return to the Capitol, but the governor allegedly pulled her in for a close hug before slamming the door to his home office shut.

“You’re going to get us in trouble,” the woman said she told Cuomo, who replied, “I don’t care,” according to the report.

His demeanor “wasn’t like ‘ha ha,’ it was like, ‘I don’t care.’ . . . It was like in this—at that moment he was sexually driven. I could tell and the way he said it, I could tell,” the woman testified.

The governor then “slid his hand up her blouse, and grabbed her breast, ‘cupp[ing her] breast’ over her bra,” the report alleges.

“I mean it was—he was like cupping my breast,” the staffer recalled to investigators. “He cupped my breast. I have to tell you it was—at the moment I was in such shock.”

“I just remember looking down seeing his hand, seeing the top of my bra and I remember it was like a little even the cup—the kind of bra that I had to the point I could tell you doesn’t really fit me properly, it was a little loose, I just remember seeing exactly that.”

Cuomo has maintained that he “never touched anyone inappropriately.”