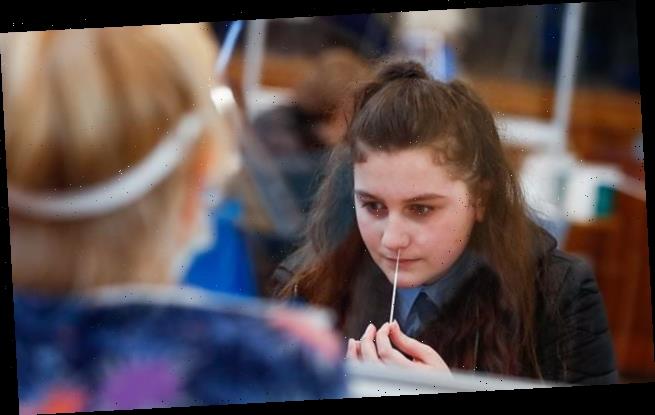 Public Health England has today published a study claiming the controversial rapid tests being used to test millions of schoolchildren for Covid are ‘very good’, despite fears the kits may be hugely inaccurate.

The research looked at lateral flow tests, for which people swab their own noses and throats and put the samples into small cassettes to get results in 15 minutes.

Millions of lateral flow tests are being used among NHS and care home staff, across businesses, schools, asymptomatic testing sites and at-home testing for the families of school pupils.

Critics have blasted the Department of Health and PHE for putting too much trust in the cheap kits, which they say are bad at detecting the virus, and for not being clear with people that a negative result is not a certain sign they are virus-free.

But in a report published today – produced by PHE’s own medical adviser Dr Susan Hopkins, who has fiercely defended the use of the tests, and two members of staff from NHS Test & Trace – officials said rates of false positive results were very low.

Scientists had been concerned that false positive results – when a test says someone is infected but they aren’t – would lead to entire classrooms being sent home for no reason and to families being forced into isolation.

But the PHE paper claims only 0.03 per cent of all test results are false positive. This is the equivalent of 450 people wrongly told they have the virus for every 1.5million tests carried out.

Health Secretary Matt Hancock added: ‘These rapid tests are extremely accurate and are helping dramatically curb Covid cases.’ Health Minister Lord Bethell said: ‘People should use them reassured there’s a minimal chance of a false positive and that they are helping us fight the virus.’ 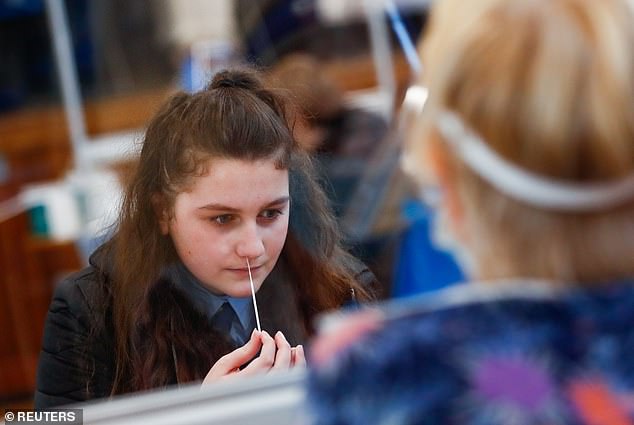 School pupils all over the UK now regularly carry out rapid swab tests for coronavirus (Pictured: A student at a high school in Cheshire)

The PHE report said it found the specificity of the rapid tests was, on average, 99.97 per cent.

Specificity measures how successfully a test detects people who don’t have the virus.

A specificity rate of 100 per cent means everyone who gets a negative result is truly negative for the virus.

Whereas 60 per cent specificity would mean 40 per cent of results that should be negative come out as positive because the test wrongly detected the virus.

The 0.03 per cent specificity found in the study means three in a thousand tests would be false positives.

PHE experts assessed the accuracy of the Innova lateral flow test, on which ministers have spent more than £800million.

They did not look at the sensitivity of the test, which considers the proportion of positive people that it successfully picks up.

Dr Hopkins said: ‘Lateral flow devices are effective at finding people with high viral loads who are most infectious and most likely to transmit the virus to others.

‘We’ve looked very carefully at the evidence that’s emerging from LFD tests that have been delivered at home and in testing sites over recent weeks, and real life scenarios suggests they are at least 99.9 per cent specific which means that the risk of false positives is extremely low – less than one in a thousand – which is a very good test.’

The use of rapid tests in schools has been fiercely debated by scientists.

The Department of Health is repackaging controversial rapid coronavirus tests as NHS self-tests in what critics claim is a ‘bizarre’ move to get around manufacturer instructions which say they are for professional use.

One of the main tests being used only detected 41 per cent of Covid cases in a trial in Liverpool where people swabbed themselves, and the manufacturer insists they are only ‘intended for use by trained clinical laboratory personnel’.

MailOnline revealed that the kits are being bought and repackaged as a self-test by the Government. Ministers have spent more than £825million buying the lateral flow tests from American firm Innova.

Innova says that a medic should use the test on someone with Covid-19 symptoms within five days of those symptoms starting, but the Department of Health is rolling them out for the public to test themselves when they don’t have any symptoms at all.

This is despite Public Health England’s own study finding the tests are at least 20 per cent less accurate when people do them themselves, and top scientists urging the Government to stop using them, warning they are unfit for purpose as self-tests.

In order to override the original instructions, the Department of Health has listed itself as the manufacturer – despite the fact it plays no part in making the device – so it could have ‘flexible’ use of the test with the blessing of the regulator, the MHRA.

Scientists described the move as ‘bizarre’ and warned that the use of low quality rapid testing will potentially give tens of thousands of people a false sense of security by wrongly telling them they are negative when they actually have coronavirus.

Testing experts including Professor Jon Deeks, from the University of Birmingham, have repeated called for the Government to stop using the Innova test – Professor Deeks said today that officials are suggesting to people the test is better than it is.

Some experts worried that the tests were not sensitive enough and would miss out people who were infected but didn’t get spotted by the kits – government scientists said those people wouldn’t have been tested any other way so nothing was lost.

Researchers also warned that people would be lulled in a sense of false security by testing negative, when the result was not a certainty – but Whitehall experts insisted people testing negative would not get any extra freedoms.

Ministers have pressed ahead despite the concerns and the tests are now used twice a week by all teaching staff and school pupils, as well as being offered to the families of school children.

They are also available to members of the public through their workplace or through local council testing centres in some areas.

NHS and care home staff also use the swabs, and care home visitors are also allowed into the homes if they regularly test negative with rapid kits.

The Department of Health, defending plans for the ambitious Operation Moonshot, said today: ‘Testing using LFDs should be a regular habit. Clinical advice is to be tested twice a week every week, which is the same policy for NHS and care home staff.’

Teaching unions had been sceptical about the plan and angered that it was happening, but yesterday appeared to row back and admit the system had gone smoother than expected.

But last night she said the return to schools appeared to have ‘gone very, very calmly’ and the use of rapid lateral flow tests seemed to be ‘going well’.

She said that ‘maybe this is one occasion where Gavin Williamson [the Education Secretary] is right and I am wrong’.

Secondary school pupils are being asked to take three voluntary Covid-19 tests on-site and one at home over the first fortnight.

They will then be sent home-testing kits to use twice-weekly. Primary school children are not being asked to carry out Covid-19 tests.

Some unions had previously called for home testing kits to be supplied in order to avoid schools being turned into ‘field hospitals’.

Ms Bousted was asked during an interview on Times Radio what she had picked up about how the first day back had gone.

She said: ‘Very good news, actually. The reports we are getting is that it has gone very, very calmly.

‘The children are delighted to be back, the teachers are really pleased to see them.

‘And the new thing in secondary schools is mask wearing, generally that appears to be going well as well.’

Lateral flow tests are only accurate at diagnosing coronavirus when administered by trained professionals, studies have repeatedly shown.

The tests, which give results in as little as 15 minutes, use swabs of the nose or throat. Samples are then mixed in a testing liquid and put into a plastic cassette which can detect the presence or absence of coronavirus and then produce an image of a line, the same way as a pregnancy test, to indicate whether it is positive or negative.

The Department of Health and NHS are instructing people to use the tests on themselves, despite manufacturers of some kits saying they shouldn’t be used as DIY swabs.

Both the swabbing procedure and the use of the test cassette can easily be done wrong and affect the accuracy of the test.

If the swab isn’t done for long enough, or deep enough into the nose or throat, it may not pick up fragments of virus. Medical professionals are also able to use nasopharyngeal swabs, which go right to the back of the nostril, whereas this is not advised for people who test themselves.

And if the sample isn’t properly inserted into the cassette the result might be wrong, or people may misread the display when it produces a result.

A University of Oxford and Public Health England evaluation of the Innova lateral flow test, which is being widely used in the UK, found its sensitivity – the proportion of positive cases it detected – fell from 79 per cent to 58 per cent when it was used by untrained members of the public instead of lab experts.

Based on this evaluation, officials pushed ahead and used it for a real-world self-testing trial.

PILOT IN LIVERPOOL FOUND FEWER THAN HALF OF POSITIVES

When the same Innova test was trialled on members of the public in Liverpool – with people taking their own swabs and trained military staff operating the tests – the swabs picked up just 41 per cent of positive cases.

In the study the rapid tests detected 891 positive results, compared to lab-based PCR swabs that found 2,829 positives in the same group. This means 1,938 people got a wrong negative result from the rapid test.

The study didn’t compare this to professionally done rapid tests, but the manufacturer Innova claims its test is 95 per cent sensitive in lab conditions.

…BUT TESTING DONE BY MEDICS IN SLOVAKIA ‘REDUCED INFECTIONS’

Despite rapid lateral flow tests getting bad press, officials in Slovakia used them on 5.2million people – almost the entire population of 5.5m – in a trial that a study later estimated to have cut the country’s infection rate by 60 per cent.

The tests used were between 70 and 90 per cent accurate and all the swabs and evaluations were carried out by trained medical workers. They used deep nasopharyngeal swabs, that go to the back of the nose, whereas self-testing generally relies on a swab of only the nostril.

London School of Hygiene & Tropical Medicine researchers said that the scheme successfully weeded out coronavirus cases that wouldn’t have been found otherwise, slashing the number of cases by over half in a week during a lockdown.

HOW RAPID TESTS ARE DIFFERENT TO LAB-BASED PCR SWABS

Lateral flow tests are an alternative to the gold standard PCR test – known scientifically as polymerase chain reaction testing – which is more expensive and more labour-intensive but more accurate.

PCR tests also use a swab but this is then processed using high-tech laboratory equipment to analyse the genetic sequence of the sample to see if any of it matches the genes of coronavirus.

This is a much more long-winded and expensive process, involving multiple types of trained staff, and the analysis process can take hours, with the whole process from swab to someone receiving their result taking days.

It is significantly more accurate, however. In ideal conditions the tests are almost 100 per cent accurate at spotting the virus, although this may be more like 70 per cent in the real world.