Exiled former Pakistan military leader Pervez Musharraf has dismissed his death sentence for treason, saying the ruling was the result of a ‘personal vendetta’.

Tuesday’s decision marked the first time a former leader of the armed forces has been convicted of the crime and sentenced to death in Pakistan.

Speaking in a video released on Wednesday, Musharraf, 76, said: ‘This case was taken up and proceeded due to a personal vendetta by some people against me.’ 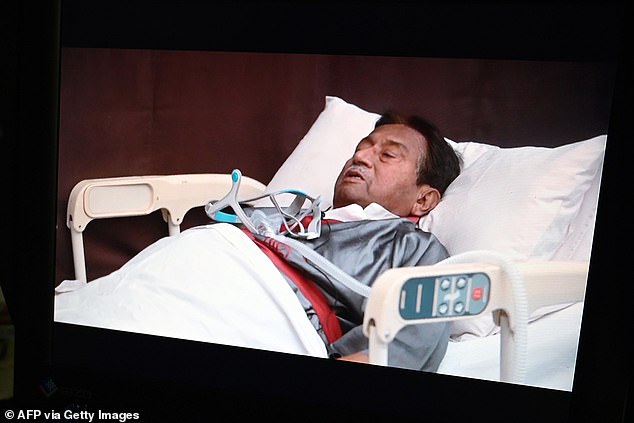 Former Pakistan military leader Pervez Musharraf, 76, has said  his death sentence for treason is the result of a ’personal vendetta’ in a video filmed from his hospital bed in Dubai (pictured is the clip being shown on a screen in Islamabad)

Musharraf – who is reportedly in Dubai and in poor health – appeared in a hospital bed in the clip looking frail and was straining to speak.

The former general however said he remained undecided on his next move or whether his legal team was planning to appeal the conviction.

The treason case – which is one of several involving Musharraf – centred on his decision to suspend the constitution and impose emergency rule in 2007.

It was first launched against Musharraf by old foe Nawaz Sharif – who Musharraf ousted in a 1999 coup – in 2013 and the case went on for years amid repeated delays until Tuesday’s surprise announcement. 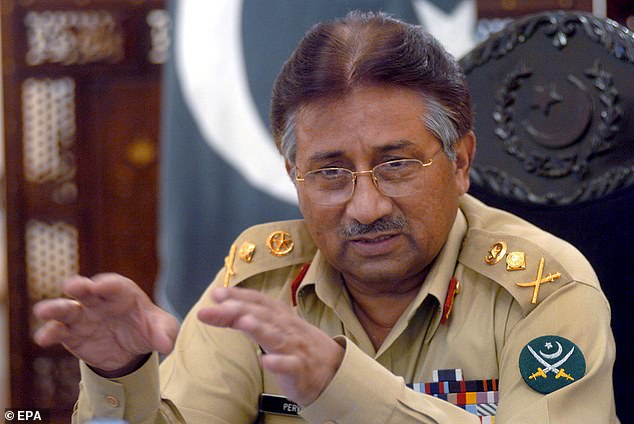 Musharraf (pictured in 2004) was found guilty of treason and sentenced to death on Tuesday, making him the first former leader of the armed forces to be convicted of the crime in Pakistan

In 2013 Musharraf was charged with high treason for declaring a state of emergency and placing several senior judges under house arrest in 2007.

All civil liberties, human rights and democratic processes were suspended from November 2007 to February 2008.

The rise and fall of Pervez Musharraf

1964: Joins an artillery regiment after graduating from a military academy.

October 1999: Comes to power a bloodless military coup launched after Sharif, who had fired him, tries to prevent his plane from landing when it was dangerously low on fuel.

April 2002: Nearly a year after declaring himself president, he wins a much-criticised referendum allowing him to stay on for five more years.

November 2007: Declares a state of emergency and suspends the constitution, citing a surge in Islamist attacks and interference by the judiciary. It sparks widespread protests and is repealed nearly six weeks later.

August 2008: Resigns in the face of impeachment proceedings by the new governing coalition. Goes into exile in London and Dubai.

March 2013: Returns to Pakistan intending to run in presidential elections but is barred from the polls and from leaving the country.

August 2013: Formally charged with three counts over the 2007 killing of his political rival, Benazir Bhutto.

December 2019: Sentenced to death in absentia for treason related to his 2007 imposition of emergency rule.

Musharraf portrayed it at the time as a necessary step to fight the growing Taliban insurgency in Pakistan which had led to a wave of militant attacks and suicide bombings.

However, his opponents said he had sacked the judges to stop them challenging his re-election as President earlier that year.

Prosecutors accused Musharraf of failing to consult Pakistan’s prime minister and said the state of emergency was illegal.

The treason charge is one of a raft of court cases which Musharraf has faced since leaving office, including a murder charge of which he was acquitted in 2016.

Musharraf was also accused of involvement in the assassination of his political rival and former prime minister Benazir Bhutto, who was gunned down in Rawalpindi in 2007.

At the time, his government blamed the assassination on then-Pakistani Taliban chief Baitullah Mehsud, who denied any involvement.

In 2017 Musharraf was declared a ‘fugitive’ in the Bhutto murder trial, which ended with charges against five alleged Taliban militants being dismissed.

However the death sentence ruling has infuriated Pakistan’s security establishment, with the military’s spokesman swiftly condemning the verdict.

He said that the armed forces were in ‘pain and anguish’ over the decision.

‘An ex-Army Chief, Chairman Joint Chief of Staff Committee and President of Pakistan, who has served the country for over 40 years, fought wars for the defence of the country can surely never be a traitor,’ the military said Tuesday.

Prime minister Imran Khan – a former rival of Musharraf – has stayed largely quiet since the ruling.

Khan is broadly considered to be pro-military and several ministers in his administration had previously served in Musharraf’s military government. 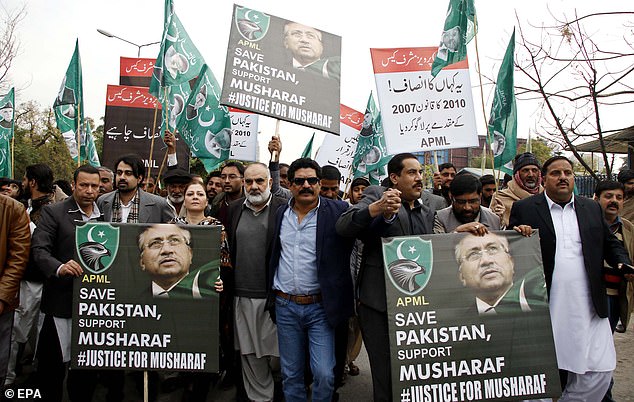 The treason case was first launched by Nawaz Sharif – who Musharraf ousted in a 1999 coup – in 2013 and the case went on for years amid repeated delays. Former Pakistani prime minister Sharif is pictured leaving court in Lahore in October last year

The military wields enormous power and has ruled the country for roughly half its 72-year history.

Musharraf is currently thought to be in Dubai and the UAE has no extradition agreement with Pakistan, meaning Emirati authorities are unlikely to arrest him.

How Pervez Musharraf seized power in a bloodless coup

Musharraf had been appointed army chief in 1998 but his relationship with Sharif quickly deteriorated.

Matters became particularly strained during the 1999 Kargil border conflict with India which was widely seen as a disaster for Pakistan.

Sharif tried to sack Musharraf in October 1999 while the general was on his way back from Sri Lanka.

But the army came to Musharraf’s defence, shutting down the airport and state television network and placing politicians under house arrest.

Sharif was accused of trying to kill the army chief after soldiers had to intervene to allow Musharraf’s plane to land with fuel running out.

Musharraf declared himself the new leader and suspended the constitution, forcing Sharif out.

The ousted PM was placed under house arrest and later sent into exile in Saudi Arabia after a court convicted him of conspiracy against Musharraf.

Musharraf initially took the title of chief executive before becoming President in 2001.

Pakistan was virtually bankrupt at the time and the coup was relatively popular.

Musharraf promised to return Pakistan to democracy, but opponents say he stifled political freedom over the following years.

Yesterday Musharraf’s lawyer Akhtar Shah said he was ‘still in Dubai and sick’ and not well enough to return to Pakistan – meaning he is likely to avoid the sentence.

‘Musharraf today sent me a message, saying he is ready to come to Pakistan but his doctors are not allowing him to travel,’ the lawyer said following the ruling.

The lawyer added that Musharraf offered to give a statement to the court through a video link but the request was denied.

Musharraf’s doctors say he is suffering from amyloidosis, a rare condition which affects the body’s organs and tissues.

Last month, Musharraf issued another video recording from a hospital bed in Dubai in which he said he was not being given a fair hearing in the case.

‘I served the nation and made decisions for the betterment of the country,’ Musharraf said in the video clip.

Musharraf has a residence in Dubai and, according to reports, has also received regular treatment in London since leaving Pakistan in 2016.

The former president can also appeal to the Supreme Court and the attorney general announced at a press conference last night that Imran Khan’s government would defend Musharraf.

‘If the person who is accused is not getting justice this government will stand against that injustice,’ Mansoor said.

The three-man court convicted Musharraf by a 2-1 verdict yesterday and ordered the death penalty by hanging, which is the only method of execution used in Pakistan.

The long-awaited verdict was initially due on November 28 but was postponed until yesterday to allow for further legal submissions.

A cigar-smoking, whisky-drinking moderate, the general became a vital American ally in the ‘war on terror’ after the September 11 attacks and escaped at least three Al-Qaeda assassination attempts during his nine years in office. 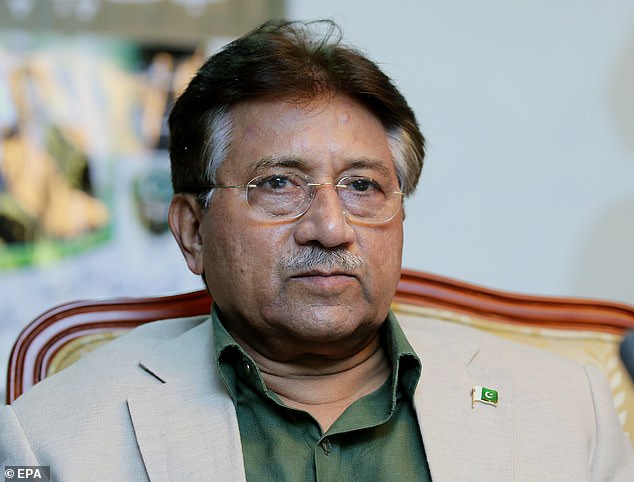 Speaking from his hospital bed, Musharraf (pictured in 2013) said he remained undecided on his next move or whether his legal team was planning to appeal the conviction

His rule faced no serious challenges until he tried to sack the chief justice in March 2007, sparking nationwide protests and months of turmoil that led to the imposition of a state of emergency.

After the December 2007 assassination of former prime minister Benazir Bhutto, the national mood plunged and he was left increasingly isolated by the crushing losses suffered by his allies in February 2008 elections.

Musharraf finally resigned in August 2008 in the face of impeachment proceedings by the new governing coalition and went into exile.

He returned to Pakistan in 2013 in an attempt to contest elections, but was barred from taking part in the polls and from leaving the country as a barrage of legal cases mounted.