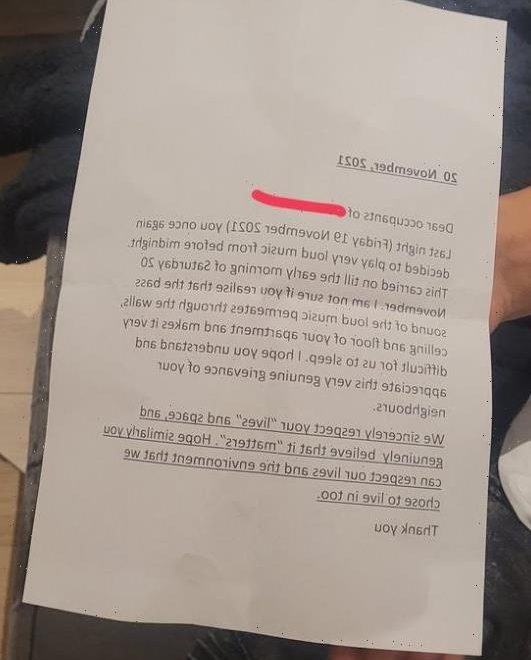 A PASSIVE aggressive noise complaint divides the internet after it's shared by an outraged resident – but some claim it's polite.

A man who took to social media to share the letter his friend received from their neighbour has sparked a heated debate about racism. 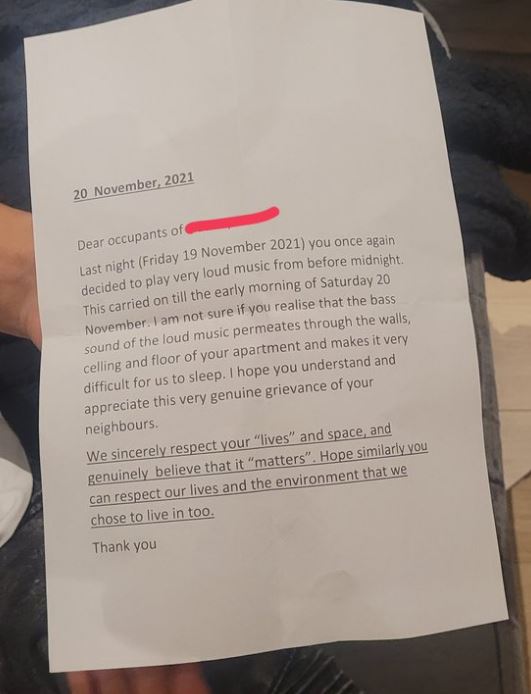 Posting under the handle @ElPapishow, a London man said the letter felt like an insult and asked his thousands of Twitter followers if they could spot the racist comment.

Responses to the post were torn over the bottom paragraph of the letter, which seemed to make to the reference to the Black Lives Matter movement, by saying: "We sincerely respect your 'lives' and space and genuinely believe that it 'matters".

"Hope similarly you can respect our lives and the environment that we chose to live in too."

Many people argued the noise complaint would've been phrased differently if it was being sent to a white tenant, but others said those offended should stop "running to the race card".

The man posted a photograph of the letter with the caption: "Look at this renk facety [Jamaican patois for disgustingly rude] letter my friend got from his neighbour? Can anyone spot the racism or isit us?"

The letter reads: "Dear occupants. Last night (Friday 19 November 2021) you once again decided to play very loud music from before midnight. This carried on till the early morning of Saturday 20 November.

"I am not sure if you realise that the bass sound of the loud music permeates through the walls, ceiling and floor of your apartment and makes it very difficult for us to sleep.

"I hope you understand and appreciate this very genuine grievance of your neighbours.

"We sincerely respect your 'lives' and space, and genuinely believe that it 'matters'. Hope similarly you can respect our lives and the environment that we chose to live in too. Thank you."

A number of responses to the post argued the letter isn't racist and the recipient should focus on showing mutual respect.

One person wrote: "Stop being an inconsiderate neighbour then running to the 'race' card.

"Respect your neighbours, loud music from my neighbours would definitely warrant them a letter from me as well. Respect is two way!"

Another said: "Nope not racist one bit, if anything it's asking for mutual respect.

"Can people like you stop blaring racism at every chance you get. Direct racism for sure do so but this is not racism."

However, the majority of responses to the thread agreed that the letter seemed racist and argued it would've been phrased differently if it was being given to someone of a different race.

"People are missing the fact that more than one thing can be true here. Yes, the receiver could have been too loud and inconsiderate.

"HOWEVER that doesn't mean you send a letter with racial puns in it. The last paragraph was unnecessary and cowardly. The letter was fine without it," one person wrote.

Another said: "To those saying this isn't racist, or questioning whether or not it is, do you think that last paragraph would have been included or phrased like that if the recipients of the letter were white?"

A third added: "The racism jumped out in the last paragraph. The way it is all underlined and the fact they put 'lives' and 'matters' in quotations marks is pure racism."