An image of an airplane passenger’s leg oozing with pus has gone viral after disgusted followers reacted to one of the more stomach-turning images they’d seen on a popular Instagram account so far.

Passenger Shaming posted the snap of a hairy leg crammed between rows of seats as the thick liquid poured from beneath a patch covering up a wound.

The picture was shared with approximately 837,000 followers on what Rolling Stone named on their list of 100 Best Instagram Accounts.

However the airline name and details of those involved in taking the photo are unknown. 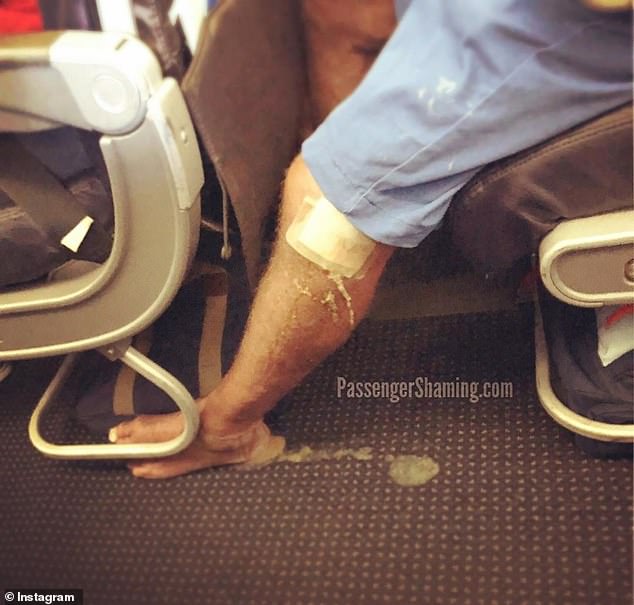 A passenger in an adjacent seat appears to have captured the opaque white stuff running in numerous directions prompting a social media user to label it ‘dis-pus-ting!’.

While former flight attendant and ‘Sassy Stew’, Shawn Kathleen, who created the account has shared numerous alarming things in his 957 posts, many fans agreed the one shared on Tuesday was a revolting sight.

Even the poster admitted the image like 15,000 times by Friday was his most shocking visual yet.

‘It finally happened, a photo legit broke me. WHAT IN THE GANGRENE IS GOING ON?! #faints #passthetourniquet #medicalmonday,’ the caption read.

A follower hinted there might be a wider problem at hand: ‘Forget the pus, what in the hell is wrong with his big toe nail.’

The barefoot passenger is photographed with his tootsies freely wriggling on the aircraft’s dark patterned carpet.

‘The puss is bad enough. But tomorrow he will have ringworm from being barefooted,’ an Instagram user predicted.

Various people who could not unsee the image referenced how they make sure to bring anti-bacterial wipes with them when traveling. It was also suggested the passenger should have been kicked off the plane.

White gunk is visible on his blue shorts that just skim the injured area.

So much pus is seen dripping down the limb that it pools around the heel area which seems to show a watermark.

Some questioned whether the bizarre image was in fact real.

One joked: ‘8oz of puss is okay to be cleared by security, but they kept my toothpaste??’

Some followers expressed outrage and others questioned whether the photograph liked 15,000 times was in fact real