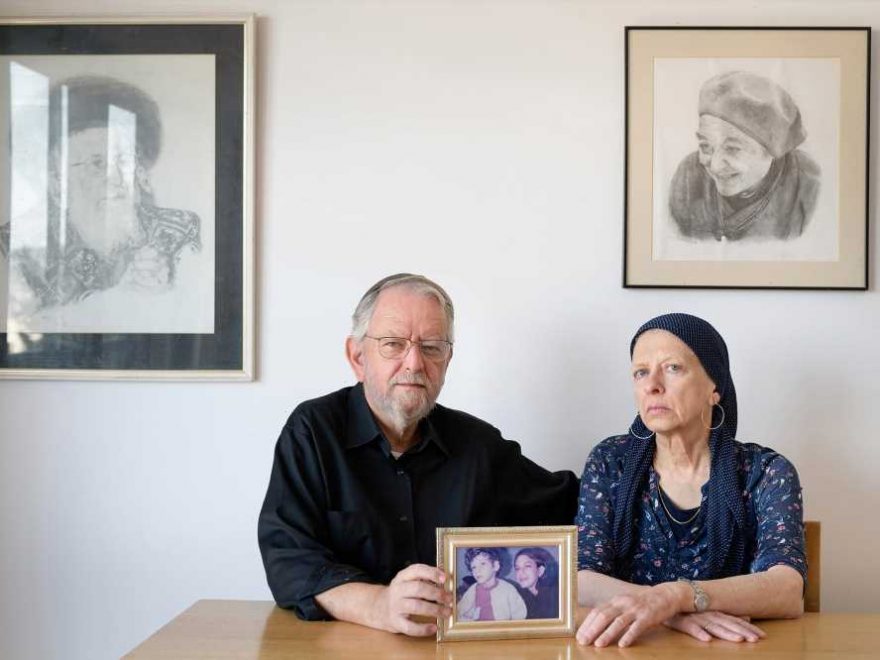 US launches first airstrike in Somalia under Biden

Malki Roth was a bubbly 15-year-old who loved her family and friends, playing the flute and visiting her grandparents in Queens. She also loved pizza, which is what brought her to a popular central Jerusalem Sbarro’s on Aug. 9, 2001, to have lunch with a friend.

Among the seven children murdered was Malki, an American living in Jerusalem with her parents and six siblings. The family buried their daughter the next day alongside her closest friend, Michal Raziel, also killed in the attack.

“We knew the first part of our lives had come to an end,” Malki’s father, Arnold Roth, 69, told The Post. It’s a struggle to hold myself back from imagining how her life might have worked out.”

“I sometimes imagine how different the grief would be had [Malki been old enough] to marry and have children [first],” said her mother, Frimet Roth, 67. “A piece of her would have remained with us. But we are left with nothing of her.”

The Roths are appalled that one of the architects of their daughter’s murder walks free, enjoying the life Malki wasn’t allowed to live.

Ahlam Tamimi, a Jordanian, was 20 when she helped scout the Sbarro location — chosen because it was popular with kids and American tourists — and drove bomber al-Masri on the day of the attack. It was a year into the deadly second intifada, the Palestinian rising against Israel that brought terror to buses, restaurants and other populous locales.

Tamimi confessed to all the charges — always with a smile on her face — and was sentenced in Israel to 16 life sentences. But she ended up unexpectedly freed to Jordan in 2011 as part of prisoner swap for an Israeli soldier held hostage by Hamas.

Since then, Tamimi, now 40, has bragged about killing children. “I wanted to hide my smile, but I just couldn’t,” she said in a 2012 interview of her journey from the restaurant. “On the way back [to Ramallah on a public bus], we passed a Palestinian police checkpoint, and the policemen were laughing. One of them stuck his head in and said: ‘Congratulations to us all.’”

She has shot to fame in Jordan, hosting the talk show “Breeze of the Free” which has aired all over the world, glorifying “resistance.” She also pens weekly columns for the Arabi21 news platform and makes frequent appearances on Arabic-language TV, including Al Jazeera and BBC Arabic, espousing pro-terror views.

“She had a huge following. [The bombing] made her a national icon,” said Arnold. “The woman who set out to murder Malki and the other children that day, a savage whose every public utterance reminds her audiences of how much hatred she holds inside her, is dancing on Malki’s grave.”

Rabbi Binny Freedman, a native New Yorker who survived the attack, feels the same. “It’s simply mind-boggling that this woman is a personality and is protected in Jordan,” Freedman, who was uninjured because he was sitting at the back of the restaurant, told The Post. “I can still close my eyes and hear and see it all, like it was yesterday.”

For the past decade, the Roth family has lobbied for Tamimi’s extradition from Jordan to the US to face federal charges — appealing to officials in Israel, DC and Jordan.

Although an extradition treaty between Jordan and the US was established in 1995, “Justice has been totally overshadowed by politics,” said Arnold. “And the politics of [choosing not to extradite Tamimi] seem to be about preventing [Jordan’s King Abdullah II] from looking bad in the eyes of the majority of the Jordanian population, who are Palestinian Arabs.”

Jonathan Schanzer, senior vice president for Research at the Foundation for Defense of Democracies, a DC think tank, said that Jordan finds itself in a difficult position: caught between its geopolitical considerations and its predominantly Palestinian population.

“They’re trying to figure out a way of doing this without setting off a storm inside Jordan,” Schanzer said. “I think the Jordanians are playing this slow for fear of domestic backlash, at a time when the government doesn’t feel particularly stable.”

Legal expert Jacques Semmelman, who specializes in extradition, told The Post, “There’s a treaty that obligates Jordan to extradite this woman. There’s absolutely no reason why she should not be extradited to the US to stand trial.”

Before a visit to the US by the king in July, the Roths sent a letter to Secretary of State Tony Blinken, asking the Biden administration to question Jordan’s breach of the treaty.

It read, in part: “Tamimi remains a lightning rod for hateful, even genocidal, sentiments that fester in Jordan and other parts of the Arab and Muslim world. Her freedom and celebrity validate the notion that if Jordanians will only push back hard enough against US pressure, the legitimacy of extreme violence in the service of the Palestinian Arab cause will prevail.”

Except for a confirmation of receipt, Arnold said there’s been “no response.”

“It’s just infuriating. What King Abdullah is doing is allowing this person to be famous,” Arnold told The Post. “You can’t build peace this way. Yet no one calls [the king] into account … he protects her [but] is received in the Oval Office with a red carpet reception.”

It was reported in 2020 that the Trump administration considered putting the pressure on the kingdom to extradite Tamimi by cutting aid, but that did not happen.

The Roths are hopeful that the new Israeli prime minister, Naftali Bennett, will bring more muscle to the campaign. “We are in contact with key figures in Israel’s new post-Netanyahu governing coalition,” said Arnold. “It’s too soon to say.”

A spokesperson for the State Department told The Post: “Tamimi is on the FBI’s Most Wanted Terrorists list for her role in a 2001 Hamas terrorist attack in Jerusalem. The United States will continue to seek her extradition and work to ensure she faces justice.”

One congressman has stepped up. Rep. Brad Sherman of California met with King Abdullah in the House Foreign Affairs Committee last month and recounted to Jewish Insider about pressing him on the extradition of Tamimi, saying the king “didn’t give a substantive response.”

“[Our family’s] frustration is rising on a daily basis as the anniversary nears,” Arnold said. “What the US State Department should have done, years ago, was raise its voice to the Jordanians.”

Upper West Side resident Sarri Singer survived an Israeli terror attack in 2003 and is the founder of Strength to Strength, an advocacy group that supports terror victims and their families. “As an American, I would think my government would have my back, no matter where I am in the world, and seek justice on my behalf,” she said. “My government should be the one protecting me, bringing a terrorist to justice for what they’ve done.

Singer said she raises the Tamimi extradition issue every time she talks to the state department and US officials.” The US hasn’t taken full responsibly to make this happen,” she said. “[Tamimi has] American blood on her hands.”

Three years ago, Arnold, an attorney focusing on technology, grew so disenchanted that he gave up practicing law. “Law lost its meaning for me these last few years,” he said, adding that he retired to focus on the fight for his girl.

He and his wife recalled how, the day before the attack, Malki came home after volunteering at a camp for kids with special needs and Frimet took her out for an ice pop.

“The memory of her reaction to it is painfully vivid to this day. She was very impressed with it and said ‘sha’ve,’ which is Hebrew slang for terrific or cool,” Frimet said. “It typifies her outlook on life — her deep appreciation of every small pleasure it granted her.”

Not long before the attack, Malki called her mom to check. in Her final words: “I love you.” “It was how we ended most phone calls,” said Frimet.

After the bombing, Arnold recalled, “The police found Malki’s backpack and her cell phone inside … You can see the nails that were embedded in the protective case I had given her. Those nails were the shrapnel that the satanic bomb-maker, Abdullah Barghouti, had packed into the guitar case to magnify the flesh-ripping capability of the weapon he custom-made for the Sbarro attack.

“The Hebrew words Malki had written on the mouthpiece mean: ‘Don’t speak ill of people,’” he said. “She underscored her determination by decorating the rest of the phone with happy little ladybugs.”

For the Roths, she will always be their little girl.

Said Arnold: “I’m simply a father driven by the need to do the little that remains for me to do after failing to protect Malki and keep her safe from monsters.”