A TEAM of Meghan Markle's ex-aides dubbed the "Palace Four" can "shed light" on her letter to her dad – with one allegedly "fact-checking" explosive book Finding Freedom.

The Duchess of Sussex, 39, is suing the Mail on Sunday for privacy copyright and data protection over five articles published in February 2019. 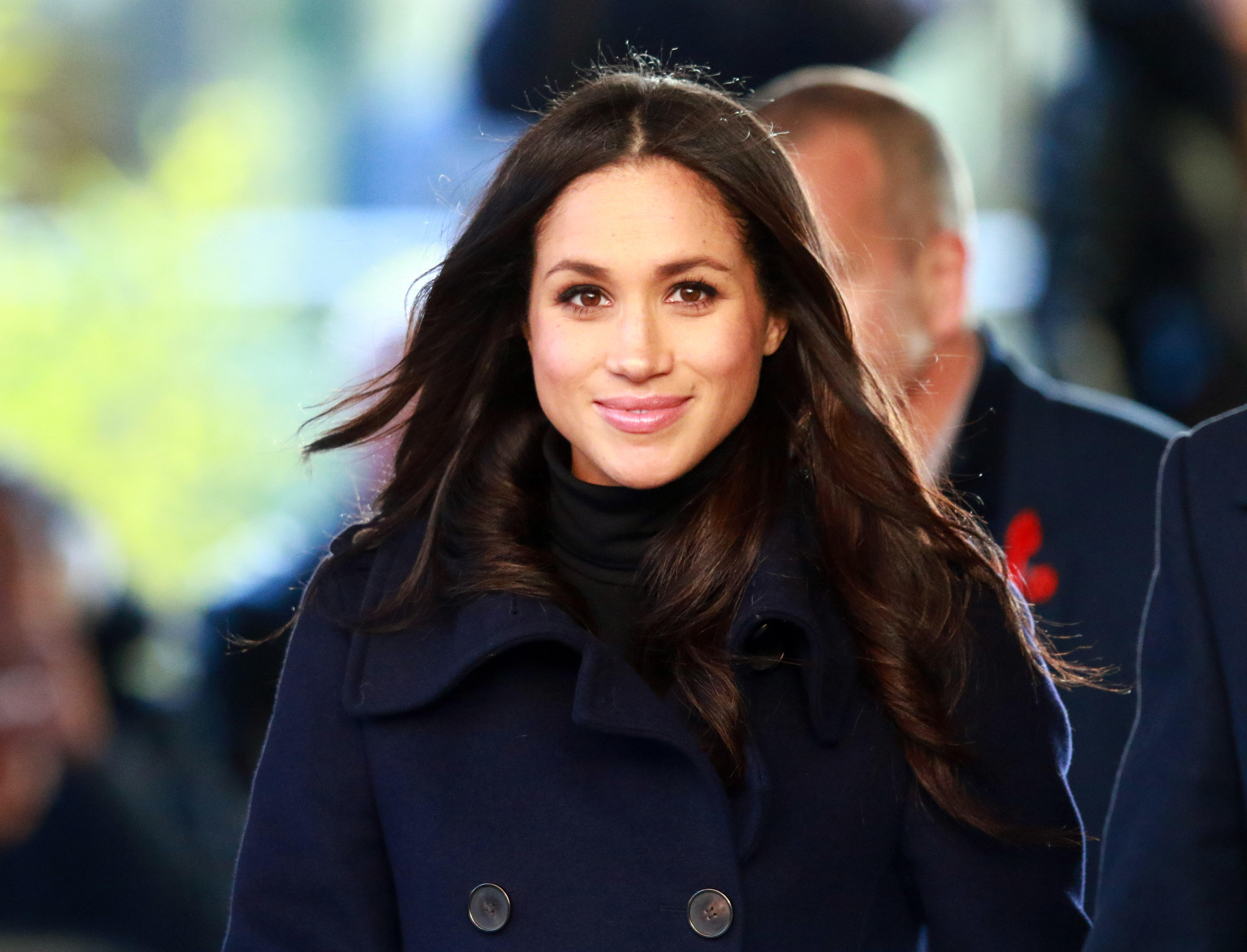 The High Court heard today how 'Palace Four', who used to work for Meghan, may be asked to give evidence if the trial goes ahead.

They include Sara Latham, who is said to have "assisted" Finding Freedom authors Omid Scobie and Carolyn Durand to "make sure they got nothing wrong".

Mail on Sunday editor Ted Verity claims in his witness statement a senior Royal source told him Ms Latham, who at the time was the Sussexes’ director of communications, "assisted the authors of Finding Freedom by performing a role that was essentially fact-checking".

He also claims the Palace source told him “a woman called Keleigh” at Sunshine Sachs had been responsible for “making calls to open doors” to the authors.

Meghan has faced claims she and Prince Harry co-operated with Scobie and Durand on the favourable biography, which she denies.

Scobie claimed in his own witness statement it was "false" to suggest the couple collaborated on the book and insists the information comes from friends and sources. 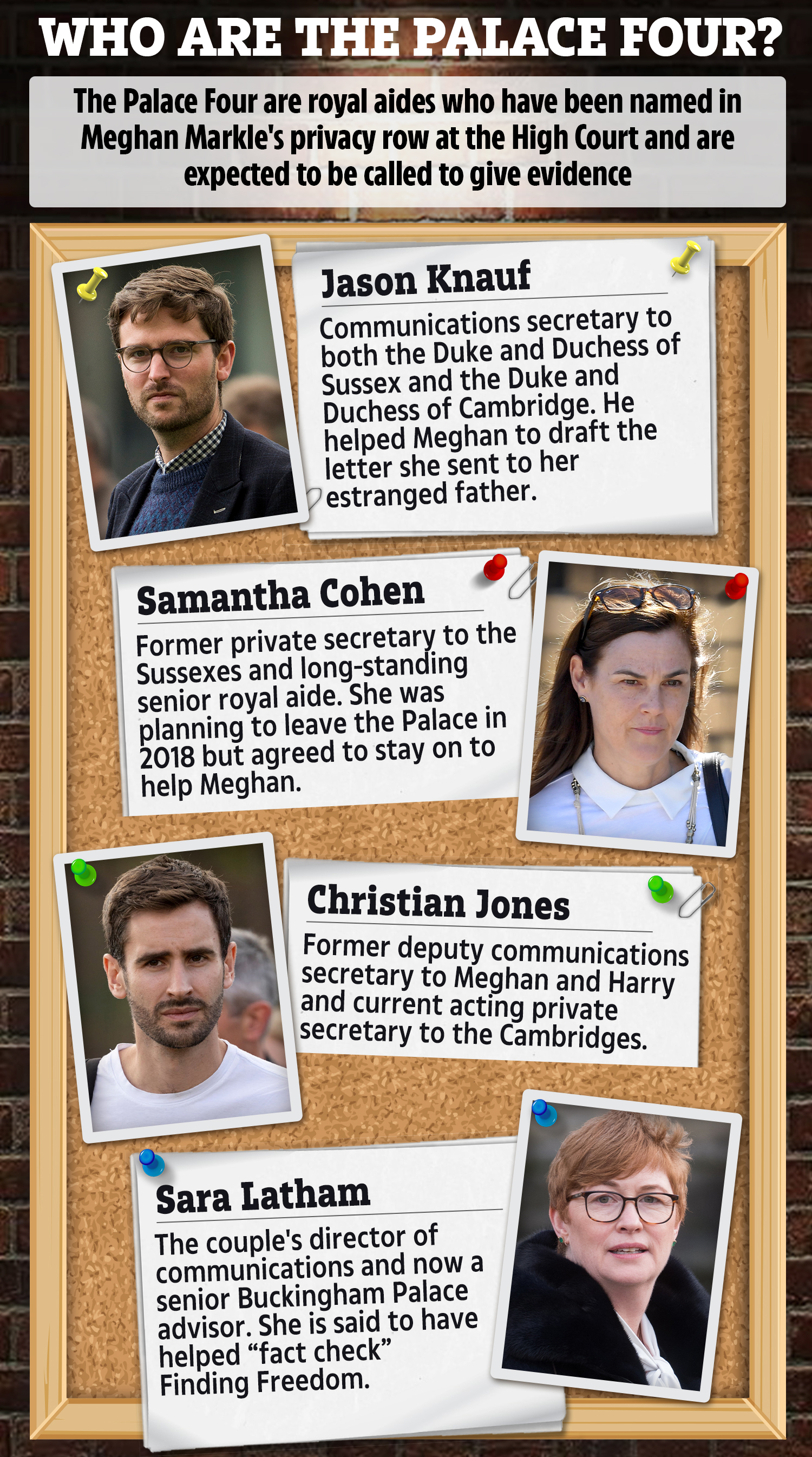 ANL's lawyer Anthony White QC today told the court a letter from lawyers representing the Palace Four said they would be able to "shed some light" on the drafting of Meghan's letter to her father, which forms part of the privacy case.

He told the court it was also "likely" there was further evidence about whether Meghan "directly or indirectly provided private information" to the Finding Freedom authors.

In the letter sent on their behalf, their lawyers said they did not "wish to take sides in the dispute" and remain "strictly neutral"

Ms Latham, who is now a senior Buckingham Palace advisor working on the Platinum Jubilee, is one of those named. 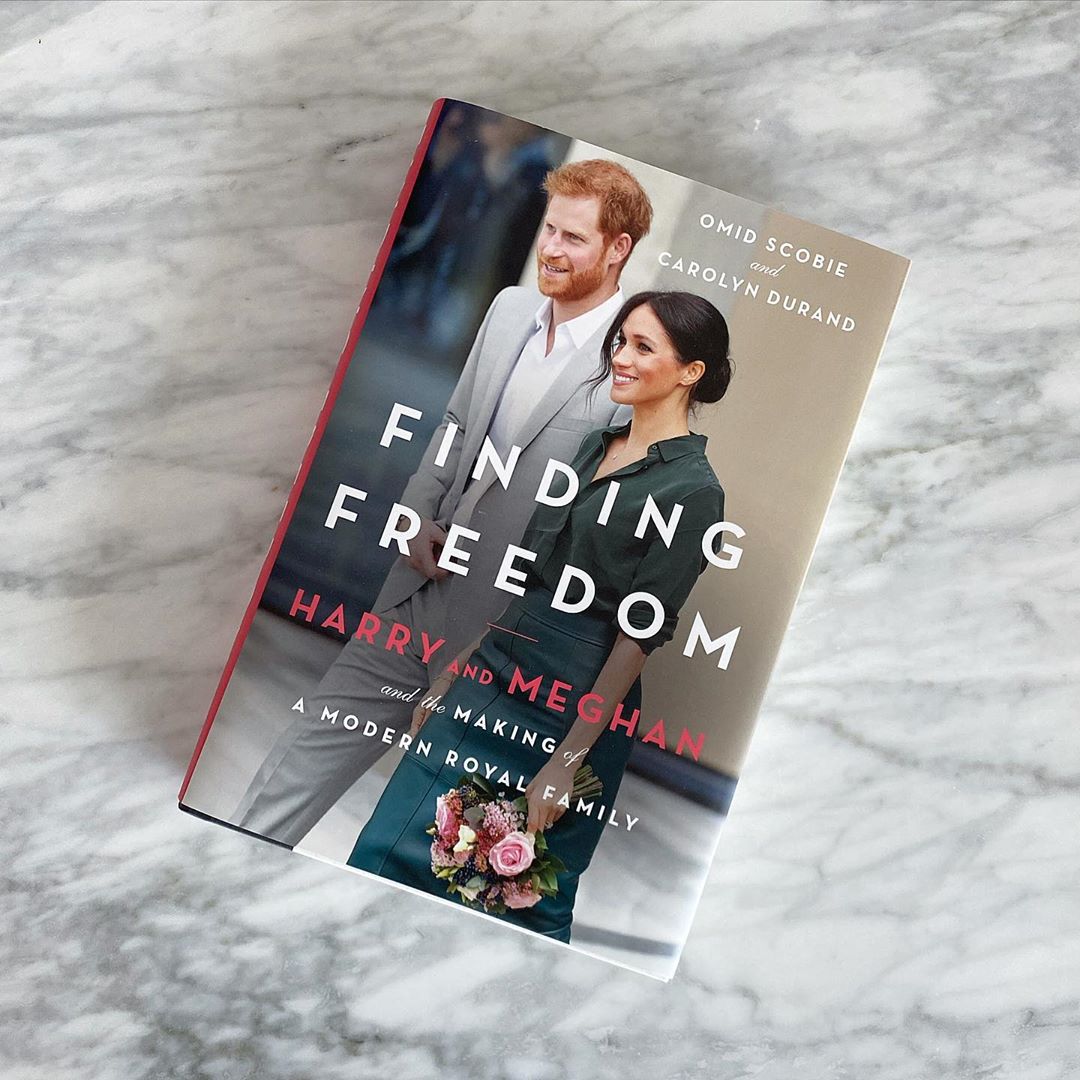 He is said to have helped Meghan work on the letter to her dad Thomas Markle.

The Duchess has admitted Mr Knauf "provided feedback" in the form of "general ideas".

Meghan is fighting for a "summary judgment" which would scrap the need for a high-profile trial and witnesses – including her estranged father.

This crux of her privacy row centres around extracts from the handwritten letter she sent to her dad Thomas, 76, in August 2018.

She is said to have felt forced to write the "painful" letter after they reached "breaking point".

And her lawyer Justin Rushbrooke QC yesterday described the 1,250-word letter as "a heartfelt plea from an anguished daughter to her father".

But in a sensational witness statement, Thomas Markle claimed the letter was a "criticism" of him.

He also referred to an article five anonymous friends gave to People magazine in which the letter was mentioned.

The article included a quote from a pal, saying: "After the wedding she wrote him a letter.

"She's like, 'Dad, I'm so heartbroken. I love you. I have one father. Please stop victimizing me through the media so we can repair our relationship.'"

But Thomas Markle branded this a "total lie" and claims the article was "expressly authorised by Meg or she had at the very least known about and approved of its publication".

Writing in his witness statement, he said: "[The People quote] suggested to people that Meg had reached out to me with the letter, saying in the letter that she loved me and that she wanted to repair our relationship.

"That suggestion was false. The letter was not an attempt at a reconciliation. It was a criticism of me.

"The letter didn't say she loved me. It did not even ask how I was. It showed no concern about the fact I had suffered a heart attack and asked no questions about my health.

"It actually signalled the end of our relationship, not a reconciliation."

Mr Markle also said the article in People magazine wrongly accused him of telling "mistruths" and "contained other inaccuracies about me".

He said: "It was wrong for People magazine to say I had lied about Meg shutting me out – she had shut me out, as the letter from her showed."

'I HAD TO DEFEND MYSELF'

The dad also slammed People for suggesting he was "to blame for the end of the relationship" as he had "ignored her".

He added: "That was false. I had repeatedly tried to reach her after the wedding but I couldn't find a way of getting her to talk to me."

Thomas Markle claims he "never intended" to publicly speak out about the letter but once he saw the article, he wanted to "set the record straight".

He also said it was "important" to publish it so readers would know they were "getting the truth".

Thomas said: "The article had given an inaccurate picture of the contents of the letter and my reply and had vilified me by making out that I was dishonest, exploitative, publicity-seeking, uncaring and cold-hearted, leaving a loyal and dutiful daughter devastated.

"I had to defend myself against that attack."

In his statement, Thomas Markle also said he chose not to allow the entire letter to be published in the Mail on Sunday as it made "Meg look terrible".

He added: "I do not want to attack or hurt her."

Lawyers for the Duchess earlier told the High Court the publication of the "intrinsically private, personal and sensitive" letter was a "triple-barrelled invasion of her privacy rights".

He said it was not "a vicious or unwarranted attack" on her dad but was instead "a message of peace".

The last line – included in court documents – read: "I ask for nothing other than peace and I wish the same for you."

The papers add: "It is a heartfelt plea from an anguished daughter to her father (the word 'pain' or 'painful' appears no fewer than five times), begging him to stop talking to the press."

Mr Rushbrooke said: "It was written, in short, by a daughter who felt she had reached a breaking point with her father."

The barrister told the court Meghan had sent it to Thomas Markle "at his home in Mexico via a trusted contact … to reduce the risk of interception".

He described its subsequent publication as a "plain and serious invasion" of privacy.

But lawyers for Associated Newspapers Limited (ANL) claim it was written "to defend her against charges of being an uncaring or unloving daughter".

Antony White QC argued "there is a very real question as to whether the claimant will be able to establish that she had a reasonable – or any – expectation of privacy".

He said Meghan having a "fear" her letter might be intercepted showed she "must, at the very least, have appreciated that her father might choose to disclose it".

But Mr Rushbrooke argued the publication of the letter breached the duchess's right to "respect for her correspondence", as well as her right to "her private and her family life".

He said the publication of the letter was a "triple barrelled invasion of her privacy."

The barrister told the court that ANL's defence raised "a disturbing question about who has the right of control over the contents of a private letter".

Mr Rushbrooke added: "Is it the writer of the letter or the editor of the Mail on Sunday?"

He continued: "There can only be one answer to that question and the answer would be the same irrespective of whether or not the writer of the letter is a duchess or any other citizen, and the answer is it is not the editor of the Mail on Sunday."

Ian Mill QC, also representing the Duchess, argued "she and she alone" created a draft of the letter to her father "which she then transcribed by hand" in regards to her copyright claim.

He argued the letter was "an original literary work in which copyright subsists and is owned by the claimant" and asked the court to "grasp the nettle and decide the issue at this hearing".

This was disputed by ANL, who say Jason Knauf – ex-communications secretary to Harry and Meghan – had "involvement" in writing it.

Mr White claimed there is a "real prospect" the Duchess "will fail to establish she was the sole author in the copyright sense".

The barrister added: "No truly private letter from daughter to father would require any input from the Kensington Palace communications team."

Meghan's lawyers also applied for a "summary judgment" to be handed down, which would swerve the need for a trial and witnesses.

Top judges at the High Court in London will now decide whether to push on or decide on Meghan's claims now.

But ANL say the facts of the case can only be determined by a trial.

If the case goes ahead, both Thomas Markle and Meghan could take to the stand in the high-profile trial.

In a witness statement previously read before the court, Thomas said: "I am a realist and I could die tomorrow.

"The sooner this case takes place the better."

The blockbuster case – one of several brought recently by the Duke and Duchess of Sussex against media organisations – was filed by Meghan's lawyers in September 2019.

It was due to be heard at the High Court this month but was adjourned for nine months due to a "confidential" reason.

A string of pre-trial skirmishes have erupted in the build-up – including Meghan's claims ANL had an "agenda" of publishing intrusive or offensive stories about her being struck out as "irrelevant" last May.

In return, a bid to name five of Meghan's pals who gave an anonymous interview to People magazine were dismissed in August.

But in a sensational move, the MoS was given permission to rely on the unauthorised biography of Harry and Meghan, Finding Freedom by Omid Scobie and Carolyn Durand, in its defence.

ANL claimed the Duchess had "compromised" any expectation of privacy in relation to the letter by allowing details of her private life to be published in the biography. 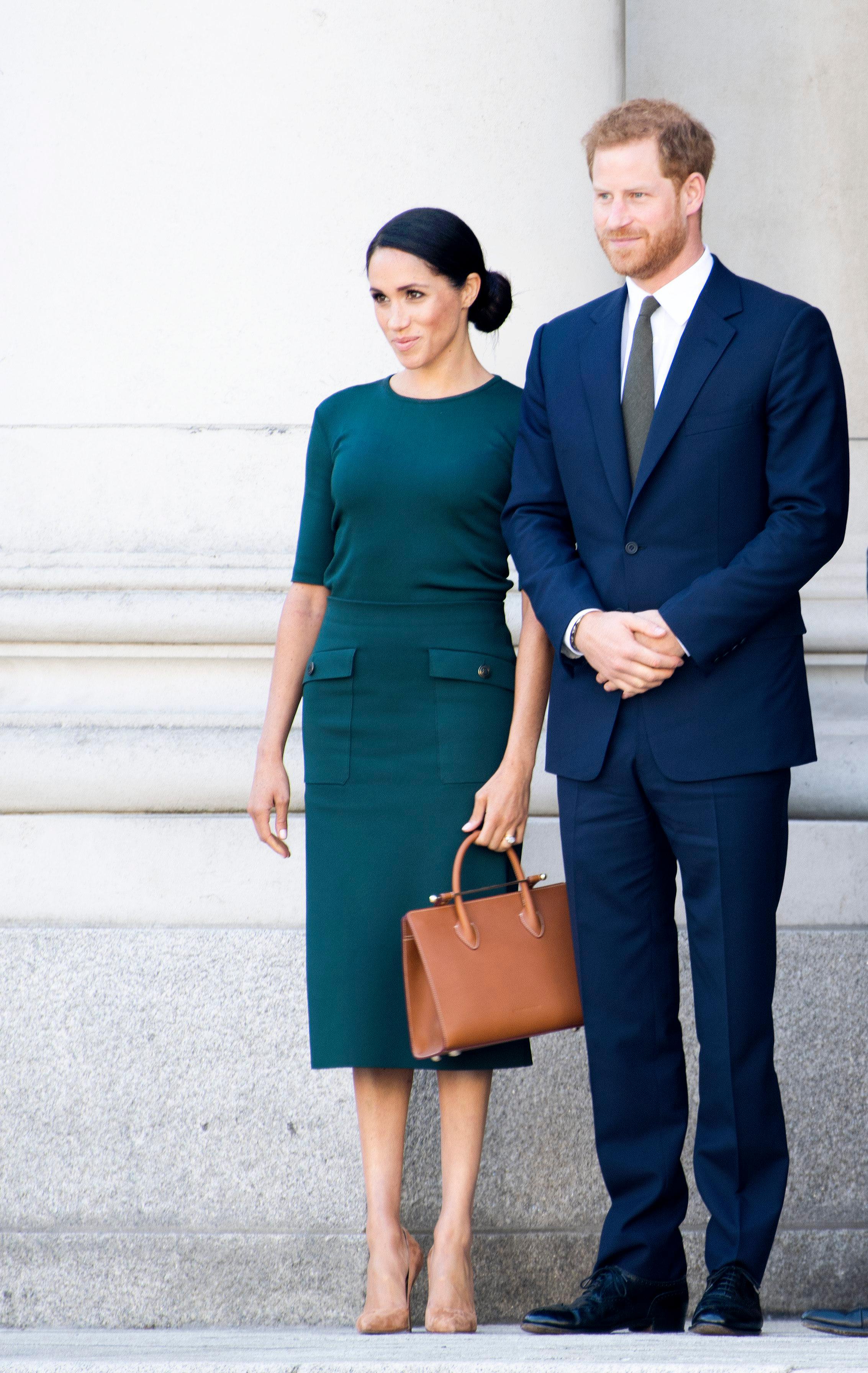 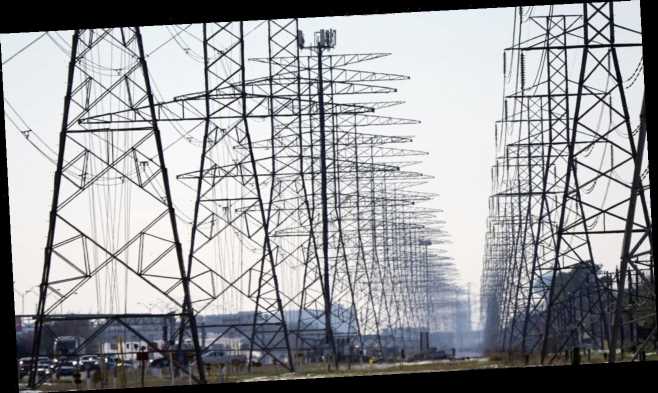