Djokovic, you might recall, had the marvellous idea last year of reviving the COVID-struck tennis circuit with a Balkan tournament called the Adria Tour 2020. 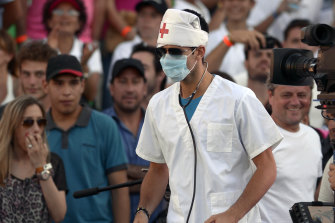 Players and officials in Djokovic's circus did not wear masks and took to hugging and high-fiving, shooting hoops during downtime and partying into the night with such abandon – and we were all amazed at this – that coronavirus broke out among the star players.

Djokovic himself got the virus, as did his wife. The tournament had to be abandoned before it reached a final.

A near miraculous side benefit involved Australia's Nick Kyrgios. He stayed away and transformed himself from clown prince to international tennis' voice of reason by firing off an arch tweet: "Prayers up to all the players that have contracted COVID-19. Don't @ me for anything I've done that has been 'irresponsible' or classified as 'stupidity' — this takes the cake."

Now, amid the shambolic triumph that is the so-called preparation for the Australian Open, Djokovic has reportedly penned a six-point prescription to make life more pleasant for the increasing numbers of players locked away in hotel rooms.

He wants fitness and training materials in all rooms, which sounds sensible … unless you're a hotel proprietor already growing restive about the sound of tennis balls being smashed into walls and windows and are perhaps dubious about turning suites into power-lifting gyms.

There is the matter of food, too.

"Decent food suitable for elite players" is required under the Djokovic plan.

Given that each player can expect a cheque for $90,000 for simply making it to round one (and $20,000 for merely turning up for the first round of qualifying), may we suggest a few calls to Uber Eats with instructions to seek a spot of elite tucker from, say, Rockpool, with a sizeable tip thrown in?

There's a bit more about reducing time in isolation and allowing visits by coaches and personal trainers, but the final demand is pure genius.

"Relocation of as many tennis players as possible to private houses with a tennis court for their isolation period."

Would that come with a convoy of chefs, party organisers and DJs hurrying to Portsea, by any chance?

Unfair as it may sound, Premier Daniel Andrews took about two minutes on Monday to tell Djokovic he was dreamin'.