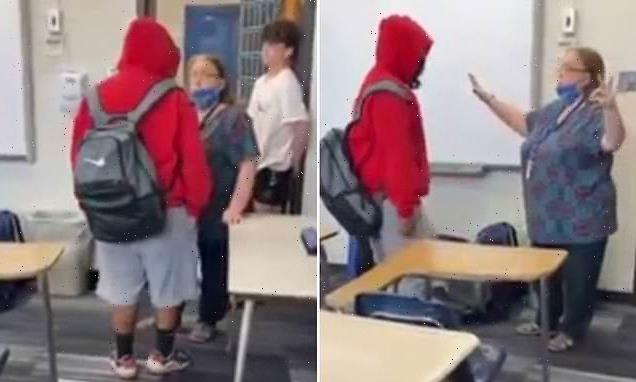 A teacher at a high school in Oklahoma has been placed on administrative leave after she was seen using the N-word in a tense standoff with a black student on Friday.

The incident at Holdenville High School has gone viral after it was posted on Facebook, with social media users identifying the teacher as a Diane Bennett.

Superintendent Randy Davenport issued a statement obtained by KWTV-DT noting that the teacher, whose name was not revealed by the district, had been placed on administrative leave.

‘Holdenville Public Schools’ main priority is the safety and well-being of our students. The district is fully aware of the incident that occurred at our high school on Friday, April 9, 2021,’ Davenport said in the statement.

‘At this time, the staff member in question has been placed on administrative leave and will be through the duration of a full investigation is completed.’

DailyMail.com has reached out to Bennett and Davenport for more information and additional comment about the incident. 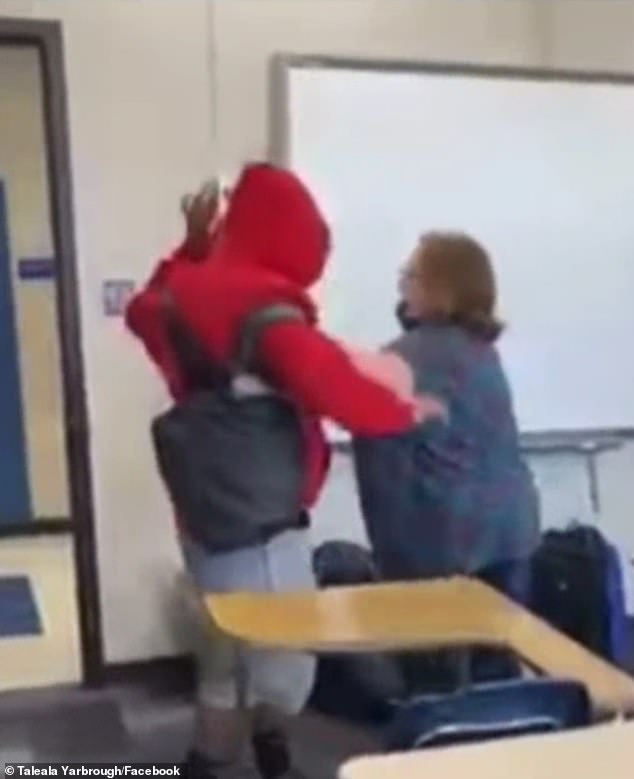 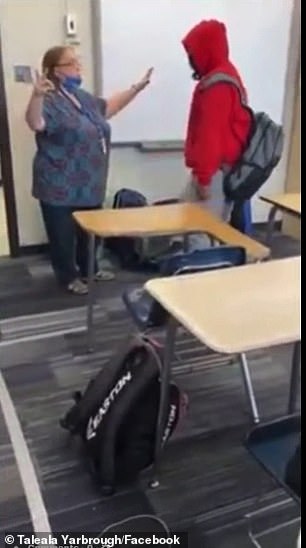 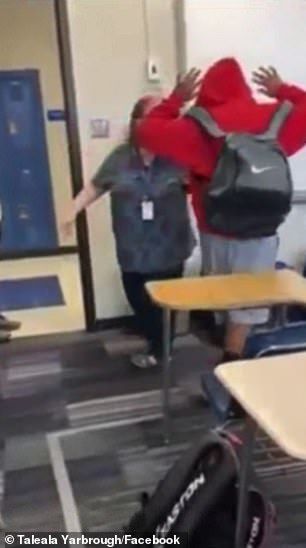 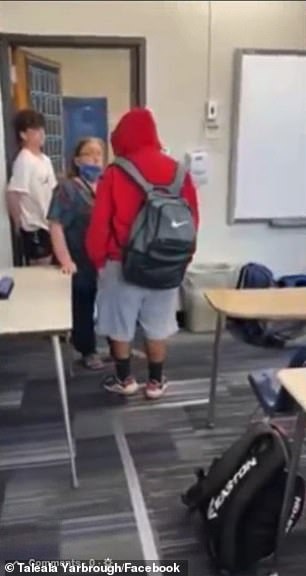 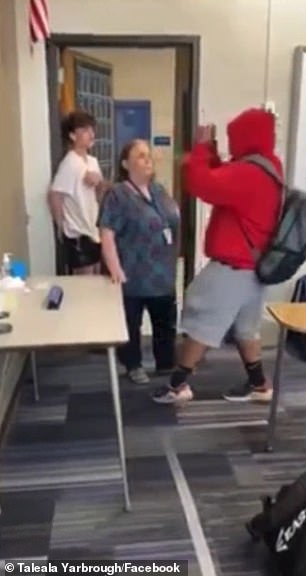 At the start of the video, the student is seen wearing the hood from his sweatshirt over his head as he paces back and forth while talking to someone on the phone.

‘I’m going to walk home,’ the student says in the video, while telling the person on the other end of the line that the teacher had been yelling at him.

‘He may not be home soon,’ the teacher says, before telling him that she would be keeping him at the school.

The student then calls the teacher a ‘b****’ before then telling her to ‘watch her tongue’ as he tries to push through her to get out of the classroom.

The teacher then tries physically stop the student from leaving, grabbing him by the shoulders and pulling on his backpack while students sit on top of desks recording the standoff.

‘You better watch the f*** out,’ the student tells the teacher.

The teacher warns him ‘don’t you hit me’ and directs him to stand at a distance away from her.

After breaking free, the student says: ‘Watch where you touch me. I’ll knock your a** out.’

The teacher then tells the student that she will visit him ‘in juvie.’

‘You better be watching who you touching, n***a,’ the student tells the teacher.

The teacher then says: ‘You better get home then, n***a.’

Other students were heard gasping after the teacher used the racial expletive. One white student in the background covers his mouth with his hands.

The teacher then appears to reference a conversation that happened before the camera started recording about the student’s apparent use of the expletive.

‘I asked you. I said, ‘What would happen if I said it?’ Right? And so, you didn’t think it was OK,’ the teacher says.

The student then rips the teacher’s glasses from her face and throws them on the ground while a student in the background shakes his head in warning.

The teacher then directs other students to call the police while the student is escorted out of the classroom.

In comments made to the original post, another Facebook user alleged that the teacher had called them a ‘f*g.’

Taleala Yarbrough, who posted the video to Facebook, said that the teacher had been with the school ‘for years’ while slamming people defending her actions.

‘The fact that people are tryna defend Mrs. Bennet is beyond me! When you’re a teacher you sign up to deal with kids,’ Yarbrough wrote.

‘NOBODY but the kids in the classroom knows what she said or did to make him feel like he had to call his mom and tell her he was walking home. Yes he was cussing BUT he tried to leave and SHE put HER hands on him FIRST.’

Yarbrough continued: ‘But no let’s just say he’s a bad disrespectful kid right? Mrs. Bennet has been a teacher for YEARS and you’re telling me this is how she chose to go about this situation?’

‘Sounds to me like she needs a new job. and the fact y’all are tryna excuse her behavior, GTFOH.’

According to a LinkedIn believed to belong to Bennett, she has been a teacher at Holdenville Public Schools since 1998. An alumni listing notes that she graduated from the same high school in 1978.