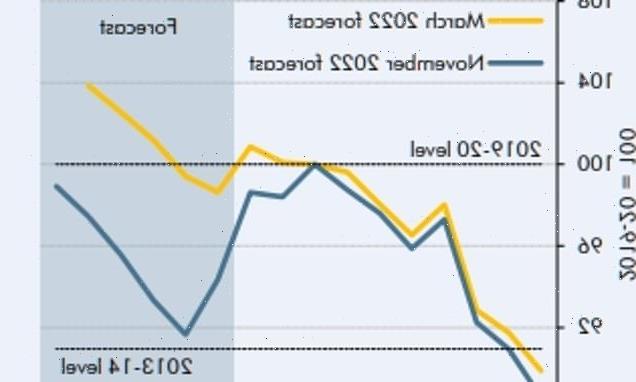 OBR watchdog predicts year-long recession as unemployment spikes to 1.7m and house prices tumble by 9% – as Britons face biggest fall in living standards since 1950s with EIGHT YEARS of progress wiped out

Britons are facing the biggest fall in living standards since the 1950s as the economy enters a year-long recession, official forecasters said today.

The Office for Budget Responsibility estimated the cost-of-living crisis would reduce living standards – the real purchasing power of households’ incomes – by a staggering seven per cent over two years.

This means families are set to suffer declining living standards for two consecutive years for the first time since the aftermath of the 2008 global financial crisis.

WHAT IS IN THE AUTUMN STATEMENT

The ultimate stealth tax will rake in billions as a four-year freeze on income tax and national insurance allowances and thresholds is extended to six years. The basic rate threshold will stay at £12,571 until 2028, while the starting point for 40p tax will be held at £50,271.

Liz Truss’s energy price ‘guarantee’ to cap average bills at £2,500 for two years will now be raised to around £3,000 from April. A universal one-off payment of £400 this winter will not be repeated, meaning millions will be an average of £900 worse off.

Cornwall Insights estimates that without government help the level would rise to £4,245.

The 25 per cent levy introduced on oil and gas profits this year is being increased to 35 per cent and extended until March 2028.

That means firms will face a 65 per cent to 75 per cent charge on profits from UK operations.

There will also be a 40 per cent tax on profits of older renewable and nuclear electricity generation, together raising around £14billion next year.

The Chancellor delayed the flagship cap on social care costs by two years, with officials predicting it will save £1billion next year.

The Chancellor said from April pensions and benefits will rise in line with the September inflation figure of 10.1 per cent, which will see the new state pension rise by £18.70 to £203.85 a week.

Cost of living payments for vulnerable

The Government will introduce additional cost-of-living payments for the ‘most vulnerable’, with £900 for those on benefits, £300 for pensioners and £150 for those on a disability benefit.

Electric vehicles are set to be charged vehicle excise duty for the first time.

Mr Hunt said the reduction in the UK’s international development spending from 0.7 per cent to 0.5 per cent of national income will stay in place for longer, potentially another five years.

The decade-long cap on council tax increases is being lifted so town halls can impose 5 per cent without holding a referendum. It could put £100 on an average Band D bill.

The OBR also forecast that, even by 2027-28, the living standards enjoyed by Britons would still remain more than one per cent below pre-Covid levels.

In their gloomy fiscal outlook published today, the watchdog said the squeeze on real incomes, rising interest rates and falling house prices had tipped Britain into a recession lasting just over year.

From this autumn, the OBR forecast a ‘peak-to-trough’ fall in GDP of 2.1 per cent.

The economic misery was further compounded by an OBR forecast that house prices will fall by nine per cent between this autumn and the summer of 2024.

This was blamed on ‘significantly higher mortgage rates as well as the wider economic downturn’.

Average interest rates on outstanding mortgages are expected to peak at five per cent in the second half of 2024 – the highest level since 2008.

The OBR forecast coincided with Chancellor Jeremy Hunt’s unveiling of his Autumn Statement, in which he outlined a fresh £54billion package of tax rises and spending cuts.

Speaking in the House of Commons, Mr Hunt pointed to how the OBR said his actions would lead to a ‘shallower’ recession and a reduction in inflation.

He told MPs: ‘We are not alone facing these problems but today our plan reflects British values as we respond to an international crisis.

‘We are honest about the challenges and fair in our solutions. Yes, we take difficult decisions to tackle inflation and keep mortgage rises down.

‘But our plan also leads to a shallower downturn; lower energy bills; higher long-term growth; and a stronger NHS and education system.’

The Chancellor added that the OBR had confirmed the Government’s actions ‘help inflation to fall sharply from the middle of next year’.

‘They also judge that the UK, like other countries, is now in recession. Overall this year, the economy is still forecast to grow by 4.2 per cent,’ he continued.

‘The OBR says higher energy prices explain the majority of the downward revision in cumulative growth since March.

Mr Hunt added the fiscal package he set out today would see lower unemployment than there would otherwise have been and protect 70,000 jobs.

He also noted his decisions would see Government borrowing more than halved over the next five years.

Mr Hunt blamed ‘global factors’, Russia’s invasion of Ukraine and the cost of Britain’s response to the Covid crisis for the depressing economic forecasts.

He said: ‘The OBR confirms global factors are the primary cause of current inflation.

‘Most countries are still dealing with the fallout from a once-in-a-century pandemic.

‘The furlough scheme, the vaccine rollout, and the response of the NHS did our country proud – but they all have to be paid for.

‘The lasting impact on supply chains has made goods more expensive and fuelled inflation, this has been worsened by a “Made in Russia” energy crisis.’ 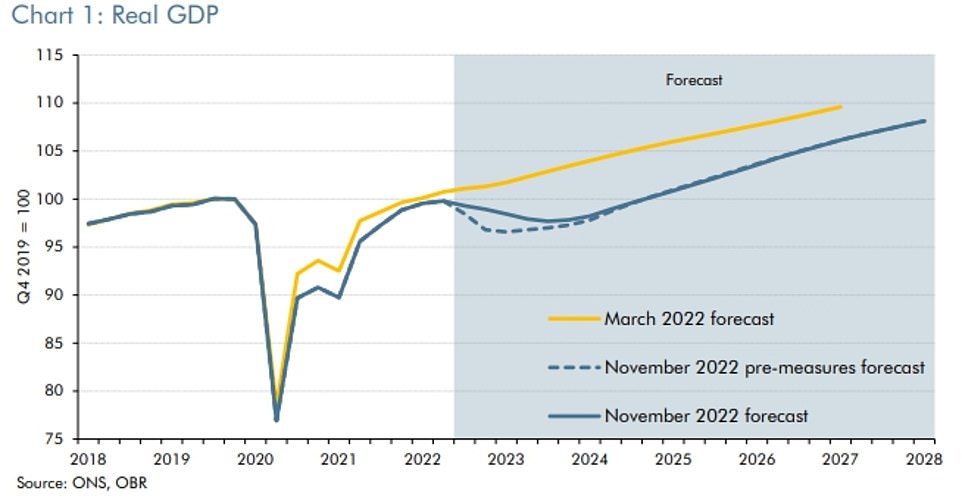 The OBR said the squeeze on real incomes, rising interest rates and falling house prices had tipped Britain into a recession lasting just over year 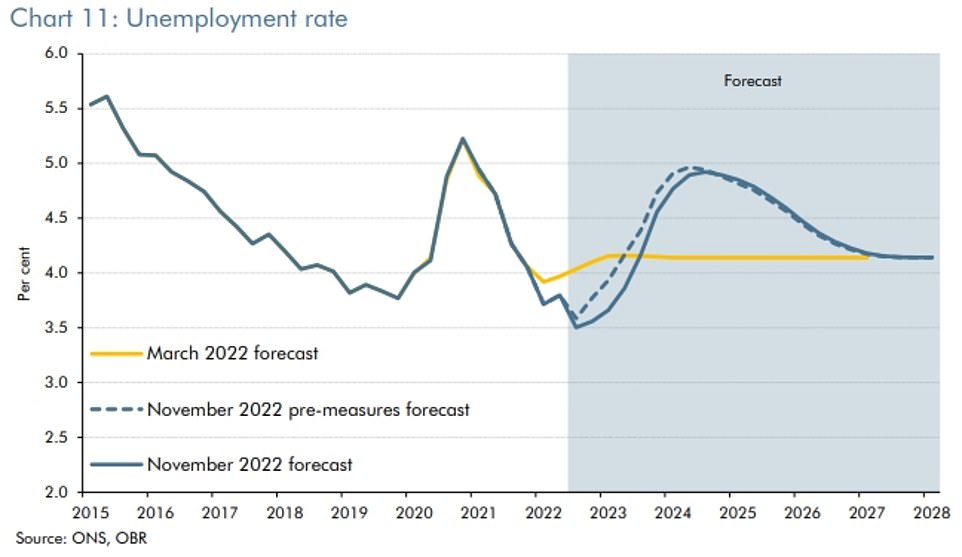 House prices will fall by nine per cent between this autumn and the summer of 2024, according to the OBR. This was blamed on ‘significantly higher mortgage rates as well as the wider economic downturn’ 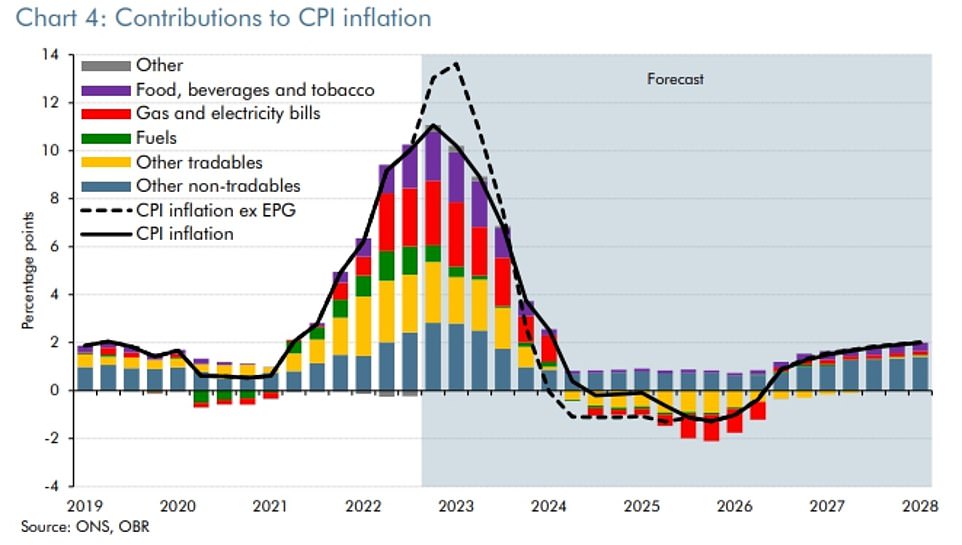 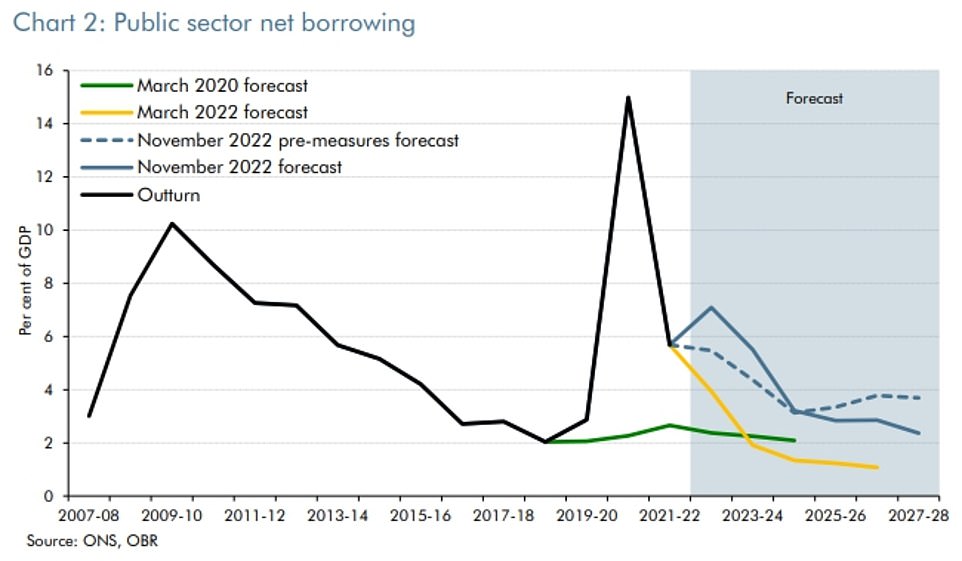 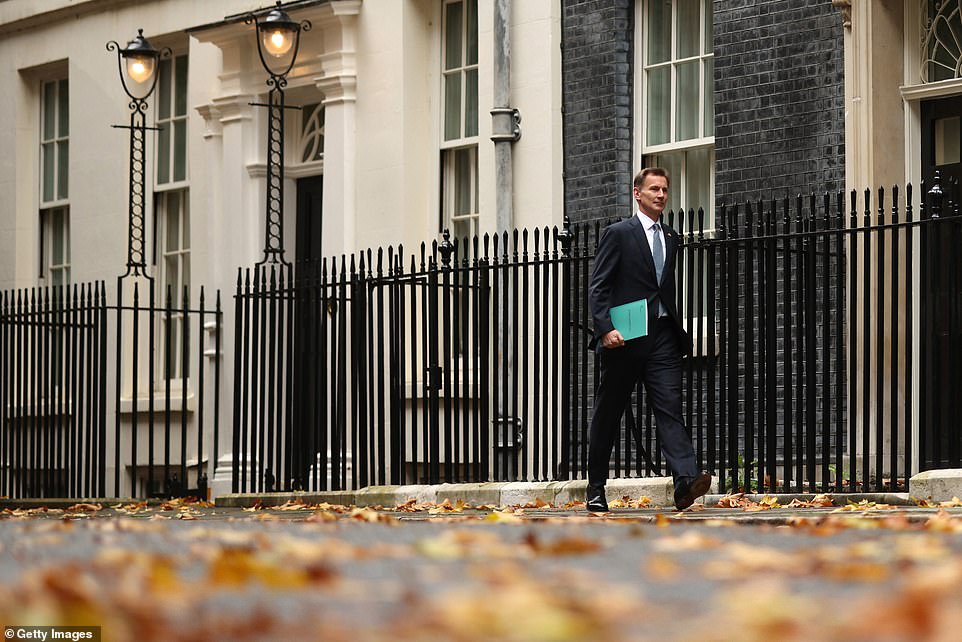 Mr Hunt immediately faced questions about his plans as it emerged that the vast bulk of the £24billion tax increases and £30billion in spending cuts will not be felt until after the next election, expected in 2024.

Spending is actually set to increase by £9.5billion in 2023-24, while only £7.4billion extra will have been raised from taxes.

All workers faces paying more in tax as a freeze on the personal allowance, basic and higher thresholds is extended to 2028, dragging people deeper into the system by ‘stealth’.

Subsidies on energy bills are being downgraded to save money, with the average household bill rising from £2,500 to £3,000 from April. Mr Hunt said the energy crisis was ‘made in Russia’.

Town halls will be freed to increase council tax by up to 5 per cent without need for a referendum.

Among the few bits of positive news from the statement, state pensions and benefits will be increased in April in line with the 10.1 per cent inflation figure from September.

The windfall tax on energy firms will be increased to 35 per cent and kept in place until 2028. Together with a 40 per cent tax on profits of older renewable and nuclear electricity generation, that will raise £14billion next year.

Mr Hunt said that foreign aid will not now return to 0.7 per cent of national income as planned, instead staying at 0.5 per cent until the ‘fiscal situation allows’ – potentially for the next five years.

In a blow to the property market, the Chancellor said previously-announced stamp duty cuts will be reversed in 2025.

In another change bound to provoke a backlash, electric cars will be charged road tax for the first time.

Although NHS budgets will be protected, other departments are facing another grim bout of austerity – albeit mostly postponed.

She told MPs: ‘And where do we find ourselves? In an even worse place than where we started: inflation spiralling, growth plunging and living standards falling.

‘Britain is a great country, with fantastic strengths. But, because of this government’s mistakes, we are being held back.

‘What people will be asking themselves at the next general election is this: Am I and my family better off with the Tories? And the answer is no.’