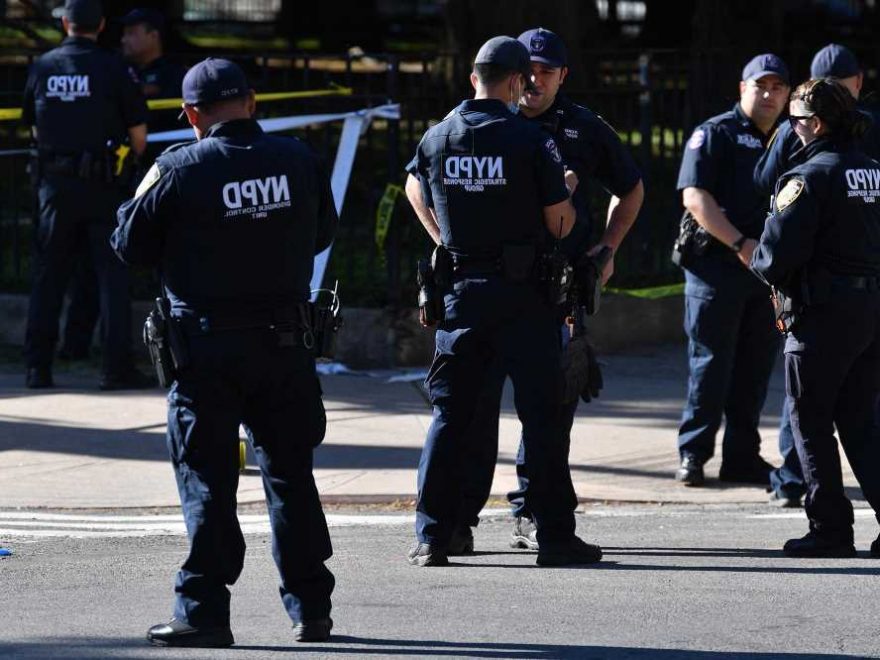 The NYPD officer who was wounded in a Brooklyn shootout with a known gangbanger has been identified as Brian McGurran, officials said Thursday.

McGurran who joined the NYPD in April 2017 and was assigned to the 81st Precinct, was shot three times in the gunfight around 11:15 p.m. Wednesday in Bushwick.

Mayor de Blasio hailed the 28-year-old officer as a hero Thursday morning and praised the NYPD’s policing strategies that got the alleged gunman off the street.

“This is an example of the dangers our officers face but also a profound example of the heroism and courage they exhibit, how much we depend on them and the smart strategies of the NYPD to have officers where they are needed,” de Blasio said.

Police Commissioner Dermot Shea said McGurran, along with a sergeant and other cops in the 81st Precinct, spotted a man “walking briskly” and “blading his body” near Macon Street and Howard Avenue.

When the cops got out of the car, the man with “a firearm turns on the officers and begins to shoot,” Shea said.

McGurran, who lives in Smithtown, Long Island, was shot in the bulletproof vest, the buttocks and right leg, Shea said.

He was taken to Kings County Hospital Center and was expected to be released Thursday afternoon.

De Blasio said the officers were near the Brooklyn park because there had been previous violence in the area.

“That what precision policing is,” he said. “This assailant committed an act of violence and literally ran into the NYPD patrol.

“Officer Brian McGurran, a heroic officer, [was] out there protecting us.”

The alleged shooter, Boyce Hayward, was taken into custody after being hit once by gunfire in the leg. The 26-year-old was also taken to Kings County Hospital Center.

“This is a story that ends, thank god, with our officer — who, although is wounded and our thoughts and prayers are will his family — is expected to make a full recovery,” de Blasio said.