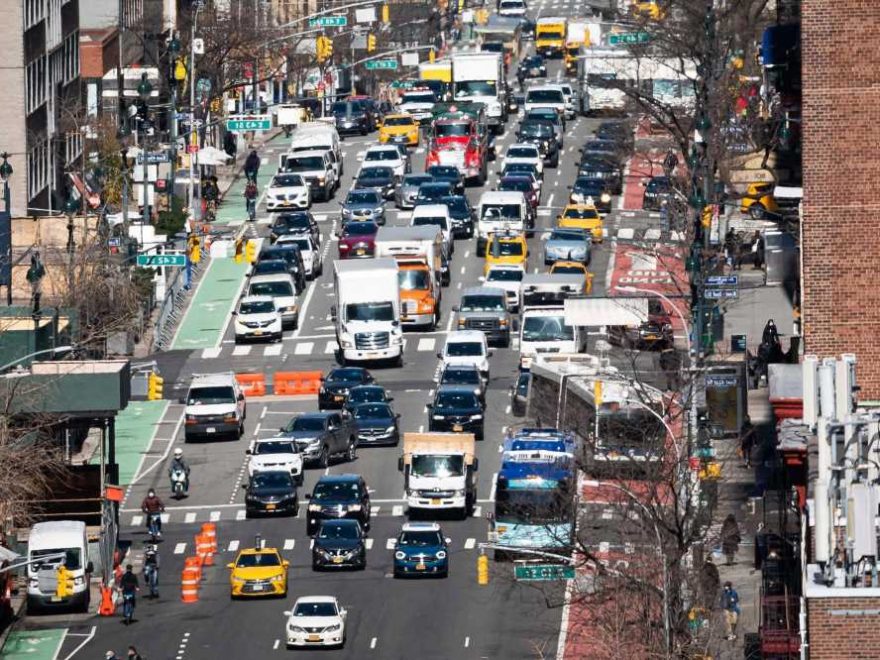 “Right now, people who have to show up for work, they’re driving more than ever before,” Matt Carmody of the transportation firm AKRF told The Post. During the early afternoon, cities including New York are actually seeing more traffic than before COVID, he said.

“It’s become ‘rush afternoon.’ It starts earlier and it’s worse than ever,” said Carmody. “People are really going to have to get back on trains and buses, or it’s going to become much worse than it is now.”

Congestion fees approved by the state in 2019 could address the problem by discouraging car trips and nudging New Yorkers back onto the subway, according to experts and advocates. But the program stalled for 20 months during the Trump administration and the MTA has yet to reveal a new timeline for implementation.

Traffic has gotten bad enough in the meantime to spur urgent calls from city leaders for the tolls on Manhattan car trips below 60th Street to be in place sooner rather than later.

Both presumptive next mayor Eric Adams and current Mayor Bill de Blasio drew attention to the issue this month, with Adams tweeting out a call for the tolls “ASAP” and de Blasio pushing for them to launch by July 2022.

The specter of increased gridlock worries business and real estate companies eager to get workers back in the office. Snail-speed traffic could keep more professionals working from home and hinder the city’s economic recovery — which already loses around $20 billion per year to congestion, according to the Partnership for NYC.

“It’s on it’s way back, it’s here — and we’re not even at the point yet where offices are reopened, which is going to happen in the next few months or so,” said Real Estate Board of New York President Jim Whelan.

“They should try to get [congestion pricing] done as quickly as possible.”

“Even without tourism, congestion is back — and it’s going to be far worse in September,” said Partnership for NYC President Kathryn Wylde. “The pandemic has made clear that commute time matters more than ever to people. People have far less patience with time wasted in their commute than ever now that they’ve gotten used to remote work.”

Wylde said congestion pricing would create a “double benefit” by nudging people onto trains and buses while raising $15 billion over for mass transit improvements.

Economist and transit advocate Charles Komanoff estimates the tolls would put millions of dollars into the pockets of corporations, small businesses and individuals.

“The classic winner of congestion pricing is going to be ‘the man with the van,’” Komanoff said. “Because traffic is going to be measurably faster, they’ll be able to service like six jobs a day instead of five. That probably means collecting another couple hundred bucks.”

The MTA says congestion fees are coming in due time — but that a federally-mandated environmental assessment must come first.

“The Federal Highway Administration is requiring us to conduct an Environmental Assessment with robust public outreach, something we agree is necessary,” said MTA spokesman Ken Lovett.

“We will be coordinating with numerous transportation and environmental agencies at the federal level and throughout the New York, New Jersey, and Connecticut Assessment Area. We will also be conducting outreach to environmental justice communities, tribal nations, other interested parties and the public at large.”