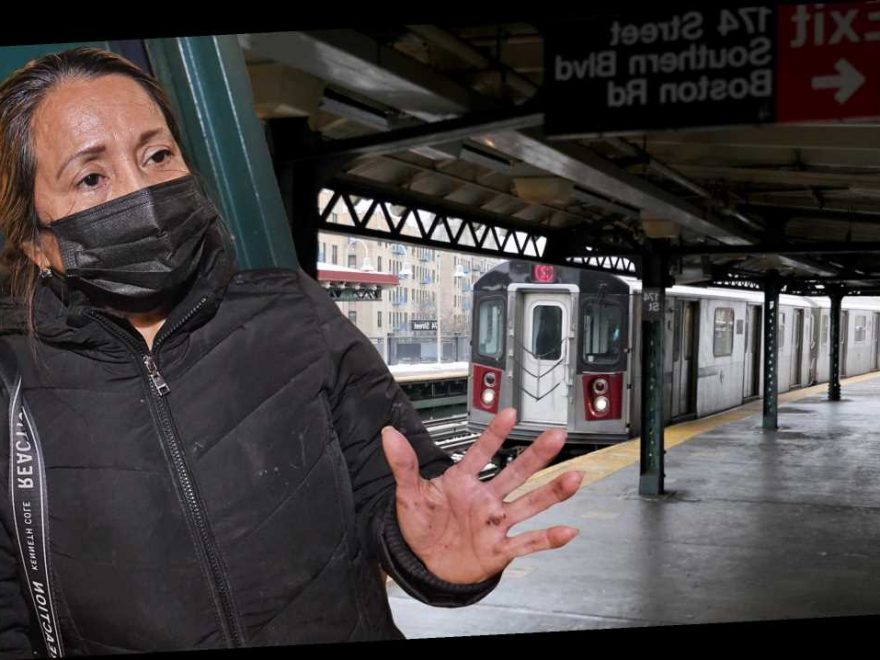 Woman, 55, shoved onto subway tracks in the Bronx

A Bronx woman shoved onto elevated subway tracks by a stranger on Tuesday said she was completely blindsided by the attack, which left her bruised and “very scared.”

“She didn’t say anything,” Rosa Galeas, 55, told The Post of her attacker. “She just pushed me.”

“I started to panic when I looked up and saw the next train was coming,” a still-shaken Galeas said in Spanish. “I became desperate to get out. I started screaming, ‘help me, help me.’”

Galeas, who works as a house cleaner, was on her way to a job and had just gotten off a No. 2 train at the elevated station at 174th Street and Southern Boulevard shortly before 8 a.m.

That’s when her assailant — a woman wearing bright yellow pants and a short jacket — unexpectedly came up behind her.

She said the woman pushed her once, but she kept her balance.

A second shove, however, sent her onto the tracks.

“I always have that fear that someone can hurt me so I don’t walk near the train,” Galeas said. “I always walk away, but this person was a young woman and, I don’t know, she pushed me with such force. The second time, I fell.”

“I never even had the intention to look at her face,” she said. “She had no intention of getting on the train. She just wanted to hurt someone.”

Galeas said her foot got stuck momentarily in a crack in the trackbed after she hit the tracks — and saw the next train coming down the tracks.

She is grateful that the good Samaritan was able to pull her to safety.

Galeas was taken to St. Barnabas Hospital, where she was treated and released.

“I’m going to need to take time to recover,” she added. “I have lots of bumps.

Galeas is now taking time off from work following her ordeal and hopes officials will consider beefing up security at transit stations.