Remain agitator Steve Bray , 50, who has announced he will end his one-man daily protest outside Parliament, is calling for proportional representation in future votes.

He told Good Morning Britain that the result, which saw Boris Johnson return as PM with a comfortable majority, highlighted ‘flaws in our system.’

Mr Bray, lauded by pro-EU campaigners and scoffed at by critics, told the ITV programme today: ‘We’ve got a problem here.

‘The parliamentary system.. the referendum, has shown the flaws in our system.

‘First past the post doesn’t serve any of us in the 21st century. We absolutely need proportional representation.’ 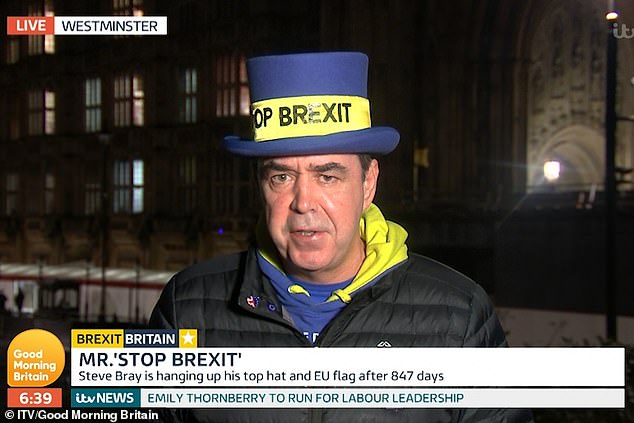 Remain agitator Steve Bray , 50, who has announced he will end his one-man daily protest outside Parliament, appeared on Good Morning Britain today to call for proportional representation in future votes 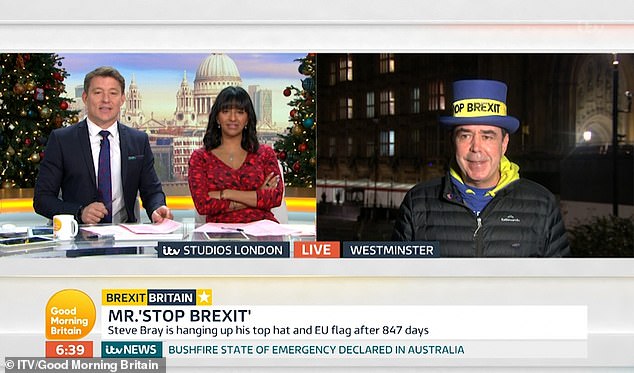 Mr Bray appeared on Good Morning Britain today where he said he was going to carry on campaigning, but said ‘things have changed’

Mr Johnson’s emphatic 80-seat majority means the UK is now on course to exit the EU on January 31 as he will have the numbers to ram his withdrawal deal through the Commons.

The UK is the only country in the European Union not to use a form of proportional representation.

In the UK, whichever candidate has the most votes in each constituency is declared the winner.

Seats won in the European Parliament are distributed according to the D’Hondt system, a type of proportional representation, devised by Belgian lawyer and mathematician Victor D’Hondt in the 19th century.

Mr Bray also today confirmed he was going to carry on the fight to keep Britain part of the EU – but would not be regular face outside Westminster.

Since September 5 2017, the coin collector from Port Talbot, has become well known for his colourful ensemble of a EU-inspired top hat and a Union Flag cape, regularly seen lurking in front of TV cameras, as he shouts ‘Stop Brexit’ to politicians and journalists. 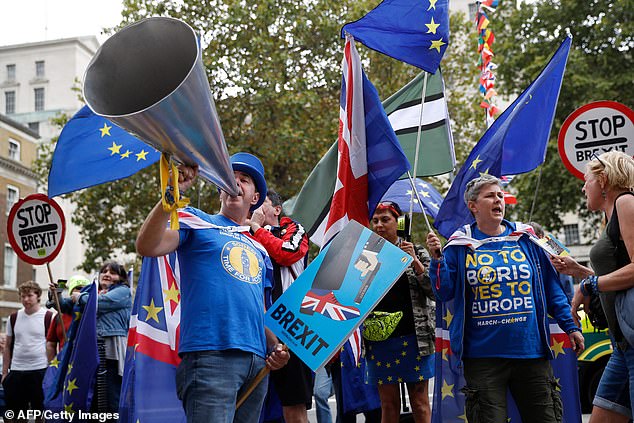 Mr Bray’s daily demonstration has been lauded by pro-EU campaigners (who frequently join him, pictured in September outside the cabinet office) 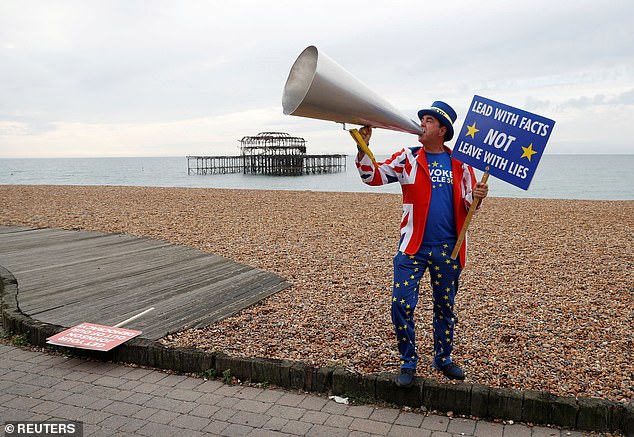 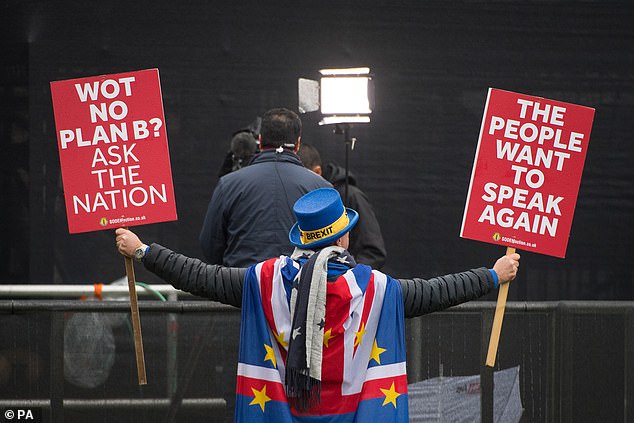 When Mr Bray first shot on to the Westminster scene to interrupt news reports by floating behind interviewees with his anti-Brexit signs, the broadcasters forked out for raised towers to keep him out of shot

He told how he is ‘self employed’ and is able to spend day after day in Westminster through crowdfunding.

Mr Bray added: ‘For the first year I was self funded and now we crowdfund throughtout the remain movement..it works.’

Speaking yesterday as he announced his decision to step down, he said: ‘The fight goes on but our future campaigning will be about holding government to account and when the proverbial s*** kicks in, we will look into how we can get back into the EU.’

He added: ‘We haven’t given up and we are not going to give up. We need to take this time to reflect about how we campaign and how to become a force to be reckoned with. 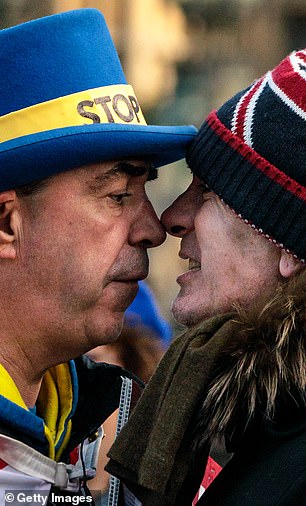 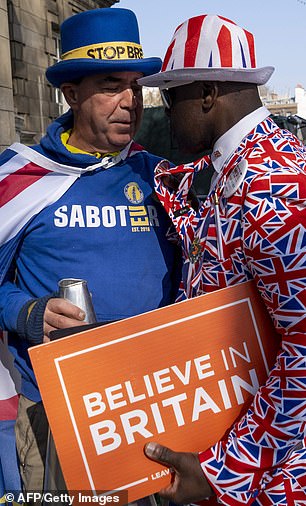 Mr Bray was regularly confronted by Brexiteers who would often make a dig at him, and occasionally even square up to the grandfather 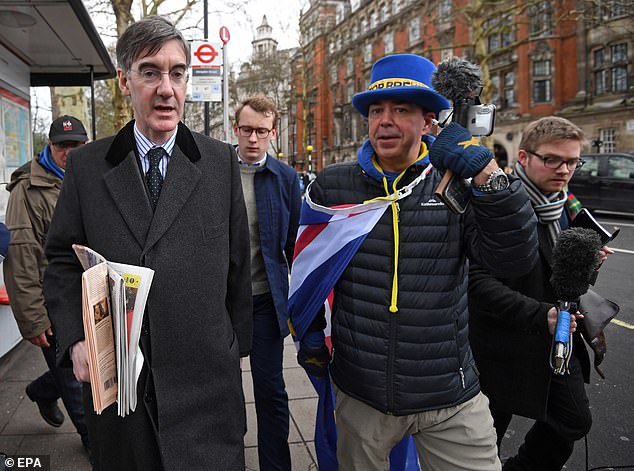 ‘As it stands we are the only effective opposition. We have to persevere.’

While the daily protest may seem a thankless task for the numismatist, who uprooted from his Welsh home, Mr Bray has raised thousands of pounds in donations from Remain activists to sustain his comfortable lifestyle.

It was revealed earlier this year he had moved into a plum Westminster townhouse opposite Jacob Rees-Mogg, after also believed to have received a handsome lump sum from Remainer plumbing mogul Charlie Mullins.

After hanging up his megaphone, the activist said he would continue living in London to keep up his political work.

Last year, the Guardian followed Mr Bray for a day to glimpse an insight into what his role involved. 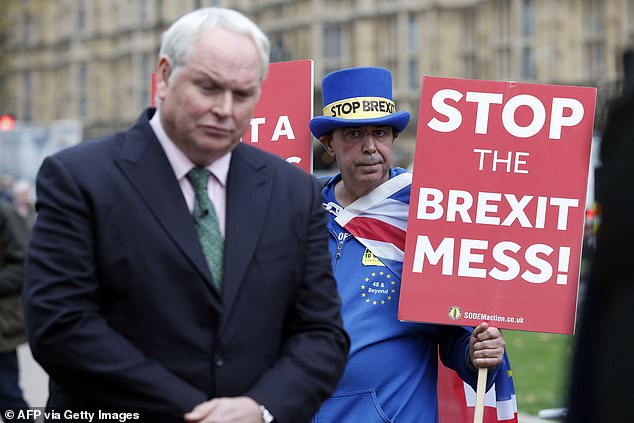 The Welsh coin collector has become part of the landscape at Westminster’s College Green, with his colourful ensemble of a grey top hat and an EU-inspired cape regularly seen lurking in front of TV cameras (Sky’s Adam Boulton pictured trying to give a broadcast)

It showed him regularly swamped by pro-EU campaigners who spurred him on to continue his activism.

But he was also grilled by Brexiteers who would often make a dig at him, and occasionally even square up to the grandfather.

One of his most memorable spats was with Theresa May’s former deputy Damian Green who Mr Bray had asked how he felt about the crunch withdrawal deal vote.

Mr Green refused to answer and said: ‘No you can’t, because you’ve just tried to shout over an interview I’ve done like you do everyone else.

‘In a competitive field, you are the biggest w***ker.’

Mr Bray continued to heckle the top Tory and said: ‘Is that a bit of abuse this morning? Not having a good day then sir?’

When Mr Bray first shot on to the Westminster scene to interrupt news reports by floating behind interviewees with his anti-Brexit signs, the broadcasters forked out for raised towers to keep him out of shot.

Yet this did not stop the hardline Remainer, who simply glued his signs to long poles to hoist them into view.

Although some reporters are clearly annoyed by Mr Bray’s loudhailer and ignore him, many acknowledge his cries with the odd smirk, or even speaking to him directly.

Good Morning Britain anchor Piers Morgan, who called Mr Bray ‘a complete moron’, had a lengthy on-air exchange with him once, in which he beat the Remainer at his own game and yelled through a megaphone at him.

Mr Bray, who stood unsuccessfully in the election for the Lib Dems, said: ‘The majority of people, 53 per cent, voted for remain parties including Labour, Lib Dems, Greens and the Scottish National Party. That’s 1.2 million more people who wanted to remain than leave.’

He added: ‘I don’t blame those people that voted to leave after being promised the earth, but the sad fact is that we are all going to end up in hell after Brexit happens.

‘Every single think tank including the government sad that we are going to be worse of with any form of Brexit.

‘We may have a high level of employment, but they are not quality jobs. They are zero-hours jobs.

‘The financial sector is the crown jewel in terms of tax revenue. Now the bankers are moving to Germany and France. Our standing in the world is gone.’