Pubs, shops and homes in Notting Hill are boarded up after boss of cancelled carnival urged revellers to stay off the streets – as 3,000 police are on alert for million-strong BLM march in London on Sunday

The boss of Notting Hill Carnival has urged revellers to stay off the streets this weekend amid plans for huge protests by Black Lives Matter and Extinction Rebellion supporters.

The annual Bank Holiday event has moved online for the first time in its 54-year history, but this has not stopped authorities preparing for public disorder in the affluent West London neighbourhood.

Shops, restaurants and homes have been boarded up down Notting Hill’s main roads that are usually flooded with around one million people over the two-day celebration of Caribbean and black culture.

Extinction Rebellion (XR) have revealed plans for a ‘civilly disobedient long weekend’ and urged its supporters to join a BLM march from Notting Hill to Hyde Park.

The demonstration, dubbed the ‘Million People March’, will call for the defunding of police forces.

In plans seen by The Mail on Sunday, Scotland Yard will deploy up to 3,000 police officers including eight armed response teams and 46 officers dedicated to ‘firearms intervention tactics’ to tackle disorder.

The decision to cancel the usual Notting Hill street party was announced in May due to the ongoing coronavirus pandemic, and since then organisers have put together an entirely digital festival.

Spread over four separate channels, the bank holiday weekend’s entertainment will have more than 200 videos showing in excess of 36 hours of original content.

Asked what he would say to anyone planning to come into the area or to anyone with a street party in mind, Mr Phillip said: ‘We would ask them to respect carnival, respect the community, and also respect the health and wellbeing of the people that have been affected by this pandemic. 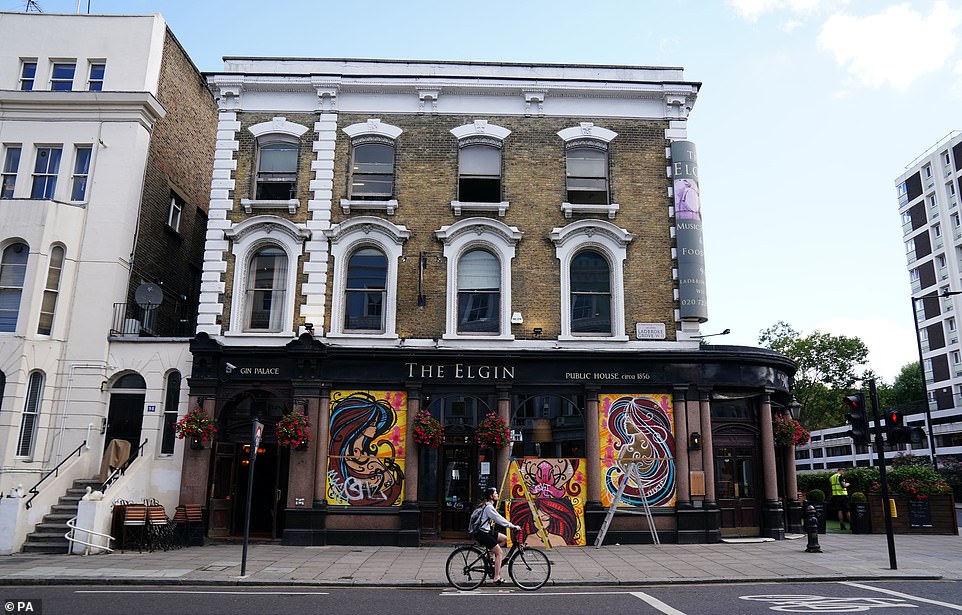 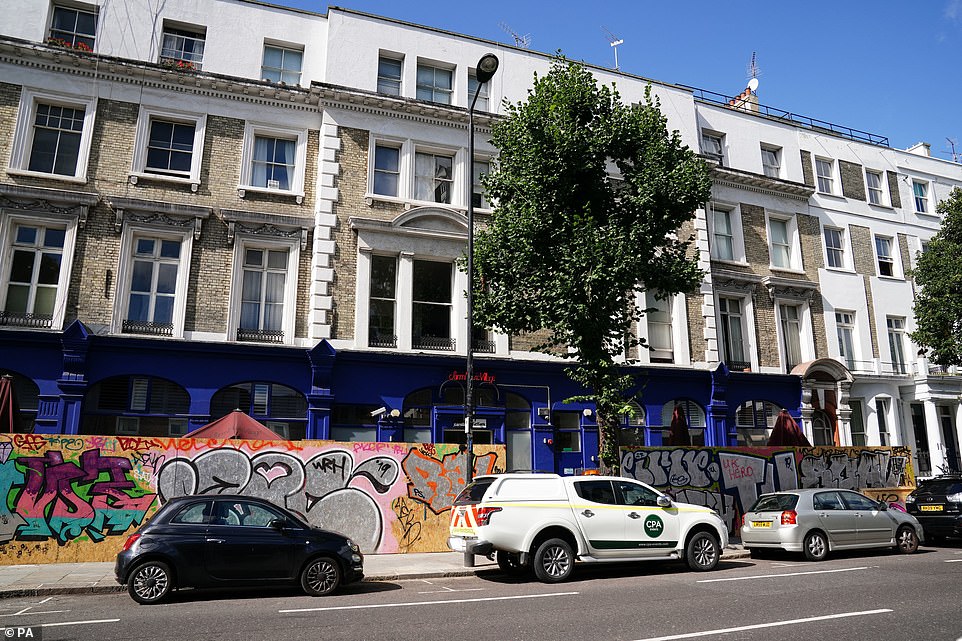 Up to 3,000 police officers will be deployed in London over the bank holiday weekend amid fears of public disorder in the affluent area of west London 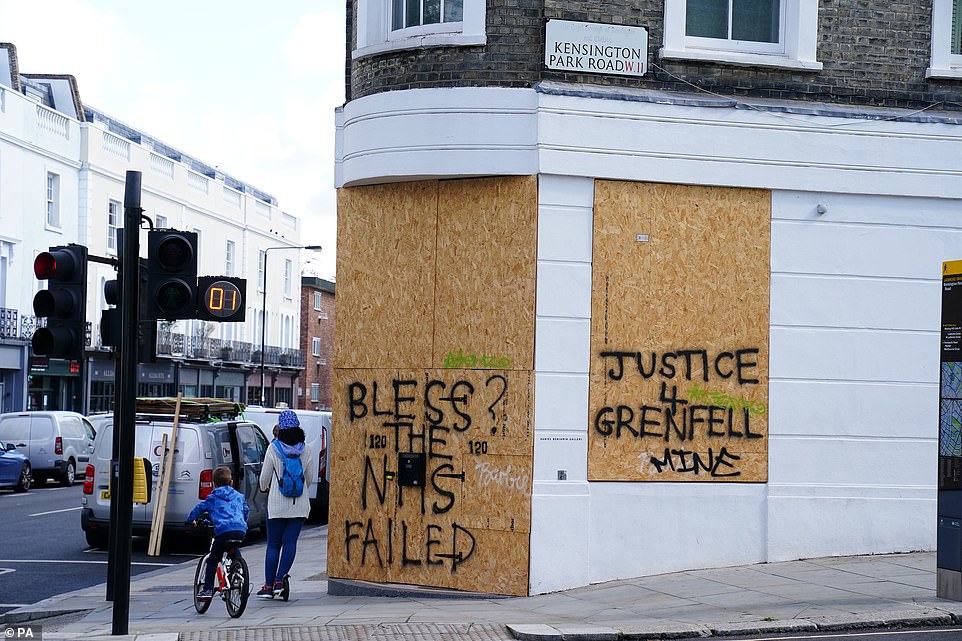 Extinction Rebellion (XR) revealed plans for a ‘civilly disobedient long weekend’ and urged its supporters to join a Black Lives Matter march from Notting Hill to Hyde Park. The demonstration, dubbed the ‘Million People March’, is calling for the defunding of the police

‘We’ve all gone through a lot in the last few months, we’ve sacrificed a lot.’

He said cancelling the carnival was not an easy decision, adding: ‘We did it in the interest of safety, so we would urge people to stay at home, stay away from the streets of Notting Hill.

‘There’s no infrastructure there in place, there’s no toilets. These are the things that are needed if you’re bringing a lot of people on to the streets, and it wouldn’t be fair on the local community of Ladbroke Grove and North Kensington to disrupt the area like that.

‘We want people to stay home and stay safe and respect carnival and protect it.

‘We don’t want anything to jeopardise the future of the carnival.’ 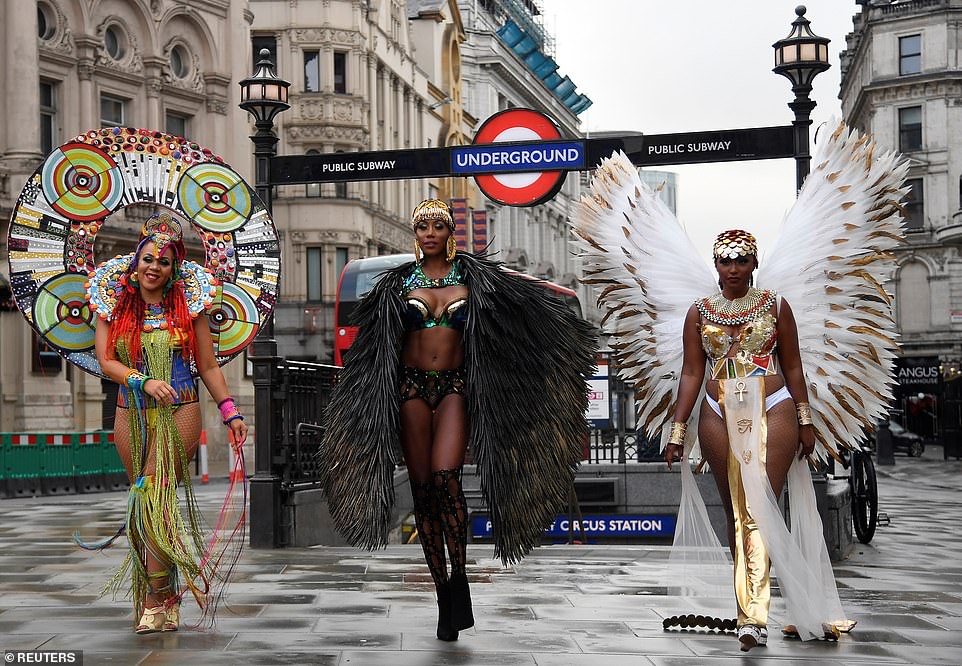 A decision to cancel the west London street party was announced in May due to the ongoing coronavirus pandemic, and since then organisers have put together an entirely digital festival. Pictured: Caribbean soca dancers display their costumes in Piccadilly Circus as they promote the first ever digital Carnival 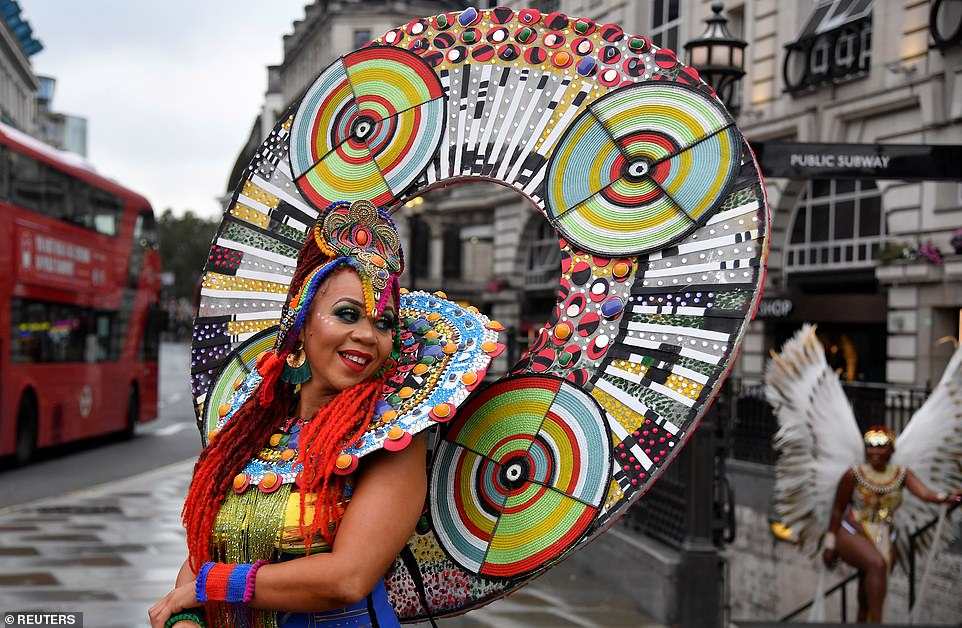 The Carnival’s director Matthew Phillip said cancelling the carnival was not an easy decision, adding: ‘We did it in the interest of safety, so we would urge people to stay at home, stay away from the streets of Notting Hill’ 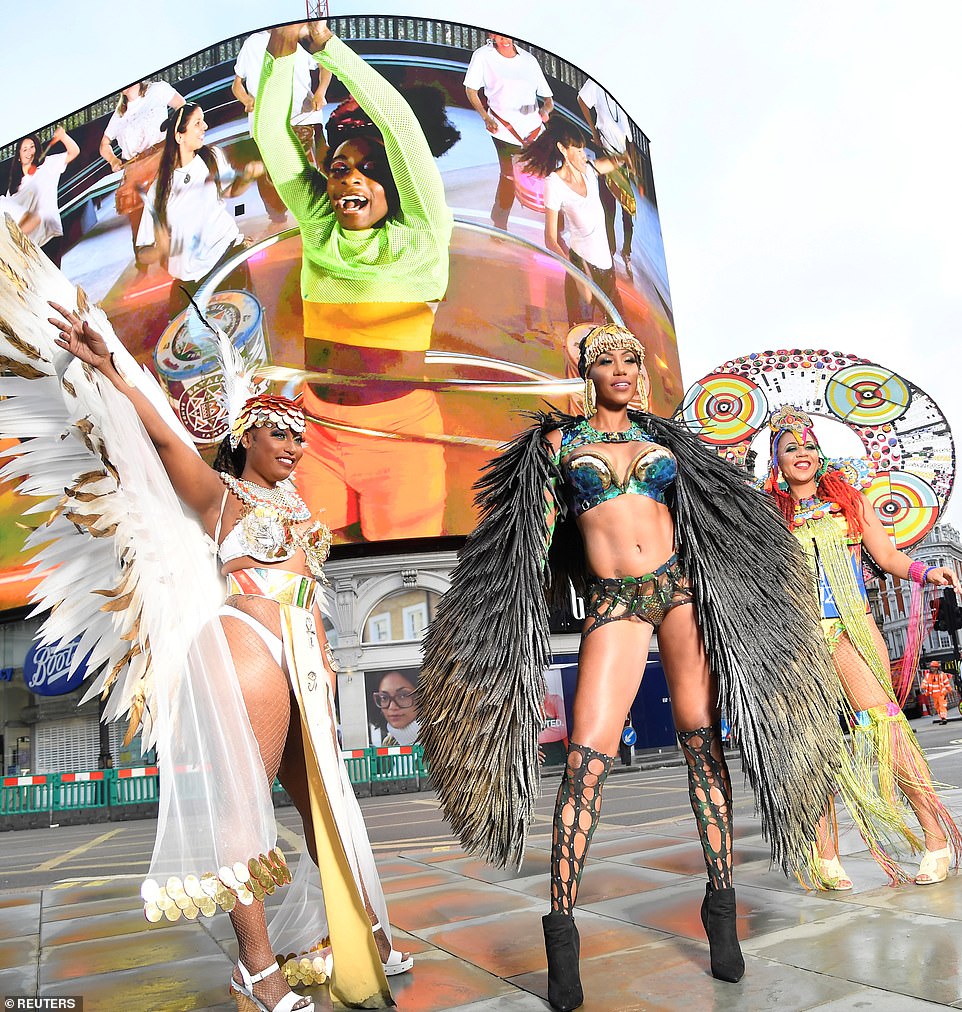 Spread over four separate channels, the bank holiday weekend’s entertainment will have more than 200 videos showing in excess of 36 hours of original content

XR has urged its local chapters to cause ‘high-impact disruption’ over the weekend before it starts a nationwide ‘rebellion’ on September 1.

The eco-activist organisation has signalled its intention to blockade Parliament Square as MPs return from the summer recess, while affiliated groups will descend on Manchester and Cardiff.

It aims to win attention and support for its Climate and Ecological Emergency Bill which it published earlier this month.

The Bill, drafted with the help of scientists and academics, calls for a ‘citizens’ assembly on climate change’ and a clear plan to stem rising global temperatures.

In an online post the group said: ‘We will disrupt the entrances to Parliament and stop MPs from continuing to pass policy that’s killing us until they agree to set up a National Citizens’ Assembly with real influence in Westminster.’

Asked how worried he is about people coming into the area, Mr Phillip said: ‘Well, obviously we are worried, because people do want to get out and celebrate, but ultimately we hope that people will be responsible and sensible.

‘If they really do love carnival, they wouldn’t come on to the streets of carnival. They would want to protect it in the same way that we have as organisers and the carnival community.’

Reflecting on the significance of the west London summer staple, Mr Phillip said: ‘Carnival means so much to many people.

‘You’ve only got to look on social media and hear from people that go to carnival regularly, it’s such an important part of people’s lives.

‘I’ve heard some people say they’d rather have carnival than Christmas. It’s very important and it’s been that way for over 54 years.

Notting Hill Carnival 2020: Access All Areas will include videos filmed all over the world as well as at venues across London, including the Royal Albert Hall, Abbey Road Studios, Theatre Royal and The Tabernacle.

Singing sisters the Sundvivas – Samantha and Nadine Bryant – are among those who recorded music at Abbey Road Studios for the event.

‘Carnival means everything to us,’ said Nadine, adding: ‘We’ve just grown up with Caribbean culture so it’s really part of us.’ 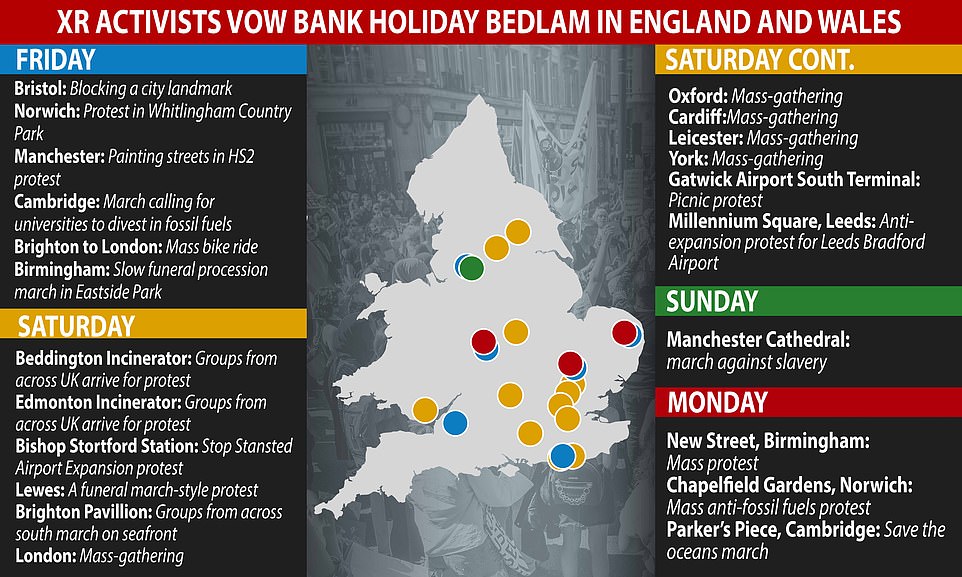 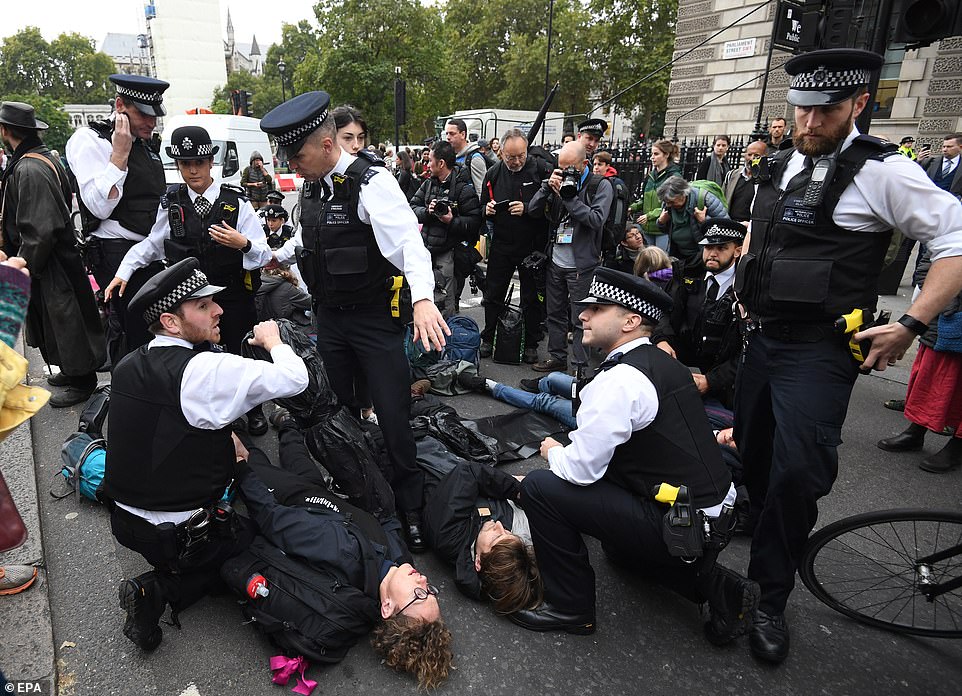 Singer-songwriter Don-E said he was ‘gutted’ about the carnival being cancelled as he has been going to it since the 1980s, but is pleased to be part of the virtual event.

Looking ahead to celebrating at home with his family, he said: ‘It’s going to be a different one this year, totally unexpected. I’m just going to have to adapt this year.’

In 2019, more than one million people had been expected to attend Notting Hill Carnival, which has been held since 1966.

London Mayor Sadiq Khan urged everyone who loves the carnival to enjoy the show from home.

‘We’ve all made huge sacrifices to reduce the level of Covid-19 in our city, and it’s vital that this bank holiday weekend we continue to play our part in tackling the spread of this deadly virus,’ he said.

What events are Extinction Rebellion planning over their four-day ‘regional rebellion’?